“Dead Man Logan” #1 is the beginning of the end for the adventures of the grizzled Logan from an alternate, desolate Marvel universe. And while it incorporates story elements from earlier in the series, it aims to be its own stand-alone narrative. But does it succeed in providing a proper send-off? 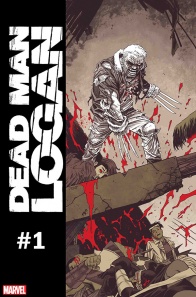 DEAD MEANS DEAD. The writing’s been on the wall for months now… Logan is dying. And he ain’t getting any better. Sick from the Adamantium coating his skeleton, his search for a cure has led to nothing but dead ends. But for once he’s actually trying to leave this world with some unfinished business… Can Logan take his last breath without slaughtering the X-Men again? Not if Mysterio has anything to say about it… Superstar creative team ED BRISSON (OLD MAN LOGAN, UNCANNY X-MEN) and MIKE HENDERSON (DEADPOOL VS. OLD MAN LOGAN), with covers by DECLAN SHALVEY (MOON KNIGHT), is putting this old dog out of his misery with a bang!

As a series, “Dead Man Logan” is a bit of an odd beast. It is technically a limited series that segways from an ongoing adventure which, on its turn, is a spin-off of a specific arc on the main “Wolverine” series from years ago. If that seems daunting, than more credit must go to Brisson for coming up with a script that is relatively accessible. Sure, it is not a perfect blue ocean, and some previous knowledge is required, but persistent readers can still come out of reading this first issue with firm footing on where each main character stands, their motivations and concerns.

Another key factor on making the issue fluid is the art of Mike Henderson. The artist has shown a knack for presenting well-known characters in his won way, be that Logan or Glob Herman or the spoiler-heavy villains of the piece. They all remain recognisable, but have small nuances (note Glob’s eyes, for instance) that sets them apart from past renditions. Settings, as diverse as frozen landscapes to dirty bars in New York, are rendered just as effectively.

Henderson is less inspired on page and panel layout, though. Aside from a great page earlier on “Dead Man Logan” #1 (where panels become the spaces between brain synapses), the entire sequence of events is uninspired, with usually fixed grids being the norm. While not a problem of their own, these grids can become quite dull if no other narrative element is used in tandem. Take the comparison between the recently-wrapped “Mister Miracle” series by Gerads, where distortion effects, different colouring techniques, and bleeding elements add flair to the pages. Instead, “Dead Man Logan” ends up appearing flat, which is a disservice to the quality of the drawings within those panels and pages.

Back to the main story elements, Brisson had a lot of ground to cover on this debut issue. It certainly helps him that he was the writer of the main “Old Man Logan” series for its latter portion, so all key plot elements are consistently portrayed. Where more credit must be given is how quickly the writer recognises these points, addresses them and moves forward. It strikes that balance of respecting its core audience, without overstaying its welcome.

Another element that adds truth to this argument is how evenly Logan and the rest of the supporting cast interact with one another. Forge, Glob are two good examples, but the rest of the cast reinforces how this older Logan operates and what readers have come to expect of him.

Finally, by the end of “Dead Man Logan” #1 it becomes clear what this final limited series will be about. While this review remains spoiler-free, it is certainly a breath of fresh air to realise that plot points set so long in the past – over a decade, some might argue – will be put in the forefront before all is said and done. It is a rare opportunity in such a serialised medium like superhero comics from big publishers that it would indeed be sorely missed had Brisson, Henderson and the rest of the creative team not stepped up to grasp it.

All in all, “Dead Man Logan” sets the board for one last adventure, one last saving grace from this deeply scared lead character. It might be harder than most series to dive into given its hefty backstory, but those elements are extremely well managed. And despite of an art package that comes up short of being great given some uncreative choices on layout, it still provides clear storytelling and nuanced character designs.

Final Verdict 7.0 – One last hurrah for the older, painful, scarred Logan. If this series continues on the path it has set for itself, this will be a worthy ride into the sunset.