Deadpool is back and he has brought strange pacing, confusing artwork, and Elsa Bloodstone with him. Beware spoilers ahead! 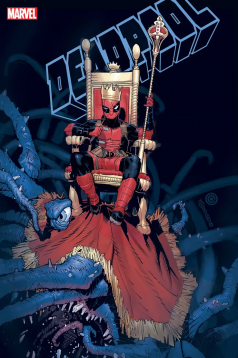 Deadpool’s newest mercenary job has him going after the King of Monsters, who has claimed a new kingdom for his monstrous subjects…on Staten Island! But you know what they say, when you come at the king, you better not miss! The Merc with a Mouth finds himself neck-deep in political intrigue, monster law, and a monster hunter out for blood! It’s like The Crown but with even more swords and monsters! Can Deadpool’s smooth charisma and deft diplomacy allow him to keep his head, or will he be royally screwed?

Whether you like it or not, “Deadpool” is back. Kelly Thompson, Chris Bachalo, David Curiel, Joe Sabino and FIVE different inkers, present “Deadpool” #1. “Deadpool” #1 feels so much longer than it actually is and is incredibly challenging to get through for the first issue in a new series. Unfortunately, Bachalo’s pencils do not do much to make the book worthwhile, with it being hampered by muddy and confusing colors that hurt the storytelling of the book.

Thomson’s script is primarily flawed in terms of pacing. Most first issues are hurt by the phenomenon of just executing exactly what the solicitation text promises, and to Thompson’s credit this issue does go beyond that, it just takes so long to get there. In the first half of the issue, the story begins in media res with Deadpool being ripped in half, we then are shown a flashback on how he got to that point, which establishes that it’s Wade’s birthday as well as how he got the job, why he takes the job, and then we are brought back to the present and then Elsa Bloodstone shows up and then they both fight the king of the monsters and then and then and then. Thompson really attempts to fit a lot into this book at every point, the flashback is only four pages but with the number of things that Thompson tries to establish along with jokes, it feels much longer. It feels counterproductive to dock a “Deadpool” title for feeling to wordy but the amount of text on certain pages makes “Deadpool”#1 feel much slower than it should be.

The titular Deadpool, feels like a difficult character to go along with in “Deadpool” #1. He feels incredibly passive and like a prop within the book, which possibly works with a number of comedy books but Deadpool’s comedy isn’t always 10/10 in the book. He’s called the “Merc with a Mouth” for a reason, but instead of a stream of consciousness from this comedy character, it feels like an editor should have cut down a lot of the padding surrounding most of Deadpool’s dialogue. While Deadpool himself feels off, the guest stars in the book feel really great. Gwenpool shows up for a brief section to drop off Multiversity’s favorite character, Jeff the Shark. Gwen’s reasoning being that Deadpool will always have a book so Jeff’s much safer with him, which is an incredibly clever bit. The other major guest in the book is Elsa Bloodstone, who is very much Deadpool’s foil in this issue. Elsa is very much in the spirit of her “Nextwave” incarnation, right down to the stylized censored dialogue. Thompson writes Elsa very well and sets seeds of what’s next for her in this title and stands out as a reason for readers to come back to the book.

In regards to art, Chris Bachalo as penciler was a major selling point for “Deadpool” #1, but unfortunately in execution, the art in “Deadpool” #1 leaves a lot to be desired. Bachalo’s linework definitely feels more normalized than some of his other recent work, but remains unquestionably “Bachalo”. The biggest gripe with Bachalo’s Deadpool in “Deadpool”#1 is that he looks so much like Spider-Man, which I understand is a joke as old as time. But Bachalo’s wide-eyed expressions for Deadpool serve the story well but feel distinctly off-model, but specifically on the model, for Spider-Man. Kudos are in order to Wayne Faucher, Tim Townsend, Al Vey, Jaime Mendoza, Livesay, and Victor Olazaba for being five different inkers to work on “Deadpool” #1 and blending together rather seamlessly.

David Curiel’s colors are effective for a majority of “Deadpool”#1 but are especially frustrating during the flashback early in the issue. Curiel opts to stylize this sequence by coloring in grey muted tones, while only highlighting the red in Deadpool’s costume, which is an interesting choice but it drastically hurts the storytelling. There are a number of pages where Deadpool is interacting with someone but it’s difficult to make out who or where the person is on the page. Curiel’s colors betray the linework in finding what deserves focus on the page that hurts the clarity of that sequence.

“Deadpool” #1 is ultimately a surprisingly difficult read through its dense pages and at times confusing artwork. The book’s greatest strength is how it sets up what’s to come with Elsa Bloodstone, whose characterization steals the show. Audiences are left curious if this first issue’s strange pace is indicative of the series to come.

Final Verdict: 6.5 – “Deadpool”#1’s lack of clarity makes it a sluggish start to a new series.