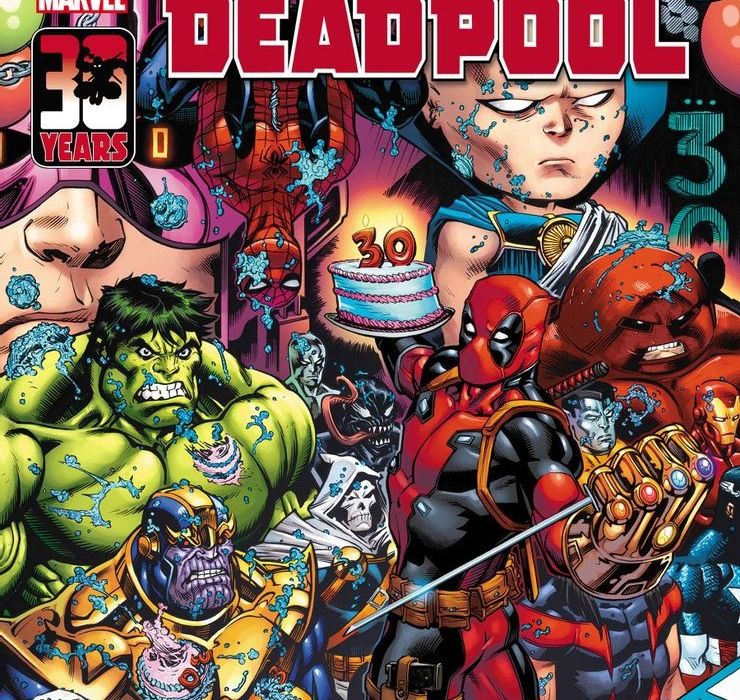 Deadpool turns 30, which means it’s time for a celebration issue. Marvel has brought some of his most iconic writers and artists back to contribute to this issue. Now it’s time for us to read on and see if it hits all the high notes of what makes the merc with a mouth so memorable, or if it falls short of his legacy. 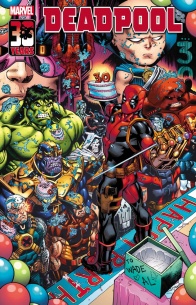 HE’S THE MERC WITH THE MOUTH! (FULL OF BIRTHDAY CAKE!)
Deadpool’s turning 30! And to help celebrate, we’ve assembled some of his classic storytellers to tell tales of Wade Wilson birthdays past, present and future! A first birthday with time-traveling assassins! A sweet sixteen party that would make Molly Ringwald weep! A 100th birthday that could only be celebrated in grand Deadpool style! Blow out the candles! Pin the cybernetic arm on the Cable! And open this present, just for you!

When you have a comic with as many writers and artists on it as “Deadpool Nerdy 30,” it can be difficult to judge the issue as a whole. Do we judge it by its best segments? Its worst? Or do we try to find the average quality of each section?

Fortunately, that’s not an issue with “Deadpool Nerdy 30,” which has no bad parts, only great parts and slightly less great but still overall enjoyable parts.

Now, Deadpool as a character has varied in many ways across writers. Some have built upon his more sympathetic traits, others have amped the bloodshed and dirty jokes to eleven, and let’s not even get in to the time he was written as hearing voices in his head rather than seeing his internal narration appear as yellow text bubbles. Suffice to say, the same is true here, giving each of the stories in this issue rather different voices and tones even when focusing on the same character.

At the same time, all of these are still true to who Deadpool is as a character. If sometimes he’s more bloodthirsty than others, or if his humor switches from fourth wall-breaking snark to utter randomness, it all feels totally natural for him. After all, a character can have more than one trait, especially one who undergoes as much as Deadpool has.

That’s why, when we get Kelly Thompson’s story of a teenage Wade Wilson making a clown of himself at prom, it feels just as natural as Gerry Duggan’s story where he goes crazy while locked in a coffin undersea and goes through several violent flashbacks as he tries to remember how he got there. In fact, the varying voices and atmospheres make it an even more fitting as a tribute to Deadpool, encompassing his different eras and runs.

This becomes especially clear in the segment written by Rob Liefeld and Chad Bowers, which is primarily Deadpool narrating about who he is and how he’s changed. As the person who initially created Deadpool, Liefeld is a good choice as the one to show how Deadpool has progressed over the years – from a random mercenary with 90’s-era disproportionate limbs and an excess of pouches to a one-time member of the Avengers.

On that note, while I will be the first to tell you how the 90’s style artwork was ridiculous, Liefeld’s own art has improved significantly over the years, toning down the excess of shading and action lines on every scene and becoming at making each of his limbs least slightly more proportional. Of course, the story also pays tribute to how his design has changed over the years, including even his “X-Force” design. The page comparing the different art styles Deadpool’s been drawn in is a nice touch to the story that gives us a visual representation of his changes while paying tribute to the artists that helped make him.

Each story highlights a different aspect of who Deadpool is, although some are more obvious than others. Joe Kelly’s story, for instance, kicks off “Deadpool Nerdy 30” in a rather bizarre manner, as we’re dropped into a battle with multiple Deadpool variants fight against a giant floating mechanical head that shoots piranhas. It doesn’t get any less random from there, although at the end it becomes a little more clear that it’s all a metaphor.

Then we get the just plain goofy, like Skottie Young’s story of a baby Wade Wilson getting a visit from multiple Cables, each one trying to fix the mistakes of their previous trips through time. It’s goofy, but in an entirely enjoyable way.

Yet “Deadpool Nerdy 30” also visits Deadpool’s more traumatic moments, like when we see him in Department K. At this point, his healing factor and cancer have made him look like he’s a living mass of flesh-colored worms, illustrated in great detail by Patch Zircher. This explores the torture he was put through, but also highlights his heroic aspirations and the future that’s ahead of him from that point.

Also, credit must always be given to Gail Simone when she gets the chance to write Deadpool. Her story, featuring Deadpool and Agent X fighting Stilt-Man, is just as snarky, raunchy, violent, and humorous as it gets. Gail’s writing is always a blast, especially when she pairs Deadpool up with characters to bounce off of, like the aforementioned Agent X and Domino.

Yet the artists are just as important as the many writers contributing to “Deadpool Nerdy 30,” and the comic has plenty of them. Some contribute entire issues, while others essentially make guest appearances to show off their specific styles for a panel or two, but all of them bring the issue together.

In spite of the many different art styles, there’s still a level of consistency throughout “Deadpool Nerdy 30.” While we can get some big differences, like Aaron Conley’s exaggerated, cartoonish style compared to Rob Liefeld’s more highly-detailed designs, it all feels appropriately “Deadpool.”

Each artist is perfectly matched to the story they’re illustrating. Aaron Conley’s goofy character designs and exaggerated expressions work expertly for Skottie Young’s story about baby Wade and a dozen different Cables, really adding to the humorous tone. Meanwhile, Kevin Libranda and Bob Quinn illustrate Kelly Thompson’s story of a teenage Wade as prom gets crashed by Wolverine fighting Hydra, and their clean art with strong, solid line work helps really bring out the action of the fight and the teenage Wade Wilson’s personality.

Similarly, Patch Zircher’s artwork amplifies the dinginess of Department K and the horrifying effect Deadpool’s healing factor has on his body. As mentioned, the times we do get to see what he looks like, the deformation is at its worst – his body is a mass of warped flesh, like worms flailing from a human form. At the same time, Patch makes good use of the darkness and shadows around Wade in his cell to keep his appearance at least a little masked, adding to the effect and the tone. That part of the story also brings in a few different styles as he pays homage to comics like “Captain America” and “Spider-Man,” complete with a change in color scheme and style to match.

Many of these segments reunite writers and artists who have already shown great chemistry in their own runs. Gerry Duggan’s story brings back Scott Koblish to illustrate, along with familiar characters like Shiklah and Ellie from Duggan’s run. His style is a little more intentionally jagged and angular, filled with so much detail and action to take in from each scene, which really plays up the amount of damage Deadpool has taken. Scott Koblish also makes great use of the way panels are set up in this story, using a coffin-shaped panel set in the center of the page early on, then utilizing small and cramped panels to emphasize the feelings of claustrophobia as Deadpool is locked away in one.

Although as far as overall art style goes, Michael Shelfer is right up at the top for this issue. The action is dynamic, characters are expressive, and the artwork is oh so clean while still bringing the setting and characters to life. It can sometimes be tricky for an artist to really bring out Deadpool’s expressions when he’s wearing his mask, but Michael Shelfer’s use of Deadpool’s eyes and the folds in his mask really bring it out. Not to mention this is probably the most adorable I’ve seen Domino looking since, well, since the last time Gail Simone and Michael Shelfer worked together on her.

Competing for a spot as my personal favorite artist in this issue is Paco Medina, who illustrates Daniel Way’s story. Paco’s artwork is full of personality that shows through with not only the characters, but little details like Deadpool’s bullet-riddled car and the chocolate bars hanging out of his belt. The illustrations are crisp and colorful, nearly leaping off the page at moments, and add immensely to the characters’ voices and attitudes.

Throughout each of the stories in “Deadpool Nerdy 30,” we get a trip through a different era in his life. From conception, to childhood, to teenage years, to his time as a mercenary, and even an older Deadpool, we get to visit Deadpool at key moments in his life. With a team of fantastic “Deadpool” writers and artists coming together, this is an issue no fan of the regenerating degenerate will want to miss.

Final Verdict: 9.6 – Because I know Deadpool would laugh if I gave it a 6.9, but it’s definitely worth a better score than that. “Deadpool Nerdy 30” is an all-star team of “Deadpool” writers and artists, coming together for a lifelong tribute to our favorite mad mercenary.