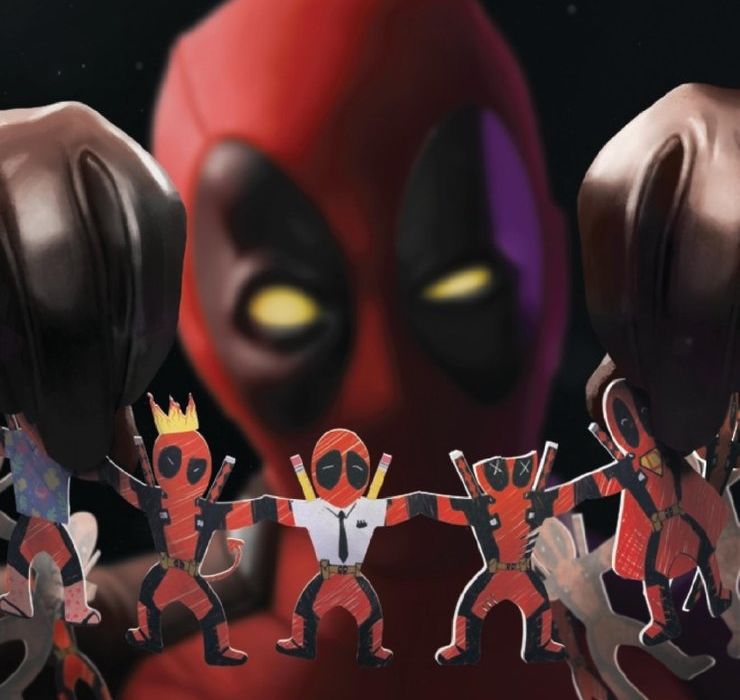 Marvel’s “The End” comics are presenting ways our favorite heroes may one day come to an end. They’re typically heart-wrenching last hurrahs for characters we know and love… and then there’s Deadpool. How can the regenerating degenerate ever actually die? Well, who better to answer that than one of the most prolific “Deadpool” writers, Joe Kelly? Read on and let’s see how his story may or may not come to a close. 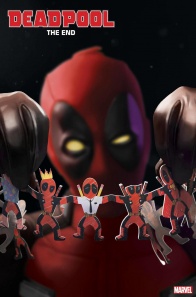 THE FINAL DEADPOOL STORY! Wade Wilson may seem like he is unkillable, but there is more than one way to put an end to him… but don’t take my word for it! Quintessential Deadpool scribe Joe Kelly and record-setting Deadpool artist Mike Hawthorne team-up to prove it to you! Deadpool is done for!

In order to celebrate Deadpool’s life in the writing of his death, writer Joe Kelly draws upon multiple aspects of Deadpool’s history and what makes him so amusing. His romance with death? Check. His daughter Ellie? Check. Gratuitous violence? Oh so many checks. Even his ex-wife Shiklah gets a name drop.

The entire start of “Deadpool: The End” is a treat to read. Artist Mike Hawthorne goes all out with the illustrations, showing how Deadpool turned reality on its head to get to where he is. I can only imagine how he reacted when Joe gave him a script saying “Doctor Strange is floating around with his hands stuck in a finger trap, Hulk screams out as his limbs are replaced with Bruce Banner’s, and most of the Avengers are stuck in a massive cosmic Rubix Cube.” Yet he managed to pull it off beautifully. Ruth Redmond enhances every scene with vibrant coloration that makes every page pop and glow while adding to the otherworldly feel of this final battle.

As for the action, well, it would hardly be a Deadpool comic without that. The better part of the issue is spent with Deadpool locked in battle against what appears to be an Asgardian Gundam Deadpool. Yes, you read that right, and it is a joy to behold. All the while, we get fast-paced battle with plenty of back and forth snark, Swords, shootouts, and a little bit of cosmic magic bring it all together.

Yet what makes Deadpool a compelling character is not the violence and snarky meta-commentary. Amusing, yes, but a good character needs more than that. Heart is also necessary for a good Deadpool comic, and fortunately, “Deadpool: The End” gives us that too.

Deadpool’s regeneration factor basically means he’ll keep on living indefinitely, while those around him still grow old and die like any other. On top of that, he’d very much like to die and be together with his beloved Death. In between the quips and universe-melting action, Deadpool still has a chance to pour his heart out in a way readers can sympathize with.

Not to mention the conclusion itself wraps up more than a few ongoing character arcs. Including Mephisto may not be necessary for the story or context, but it’s satisfying nonetheless to see how he pulls one over on the king of Hell.

While this would be a perfectly satisfactory ending to Deadpool’s story, it’s safe to say that “The End” stories are only a possible way that the characters may meet their final fate. In fact, “Deadpool: The End” gives us more than a few to choose from. We get happy endings, scary endings (working in an office forever is indeed a terrifying concept), two Hollywood endings (one with a nice touch of Deadpool’s pansexuality for good measure), the edgy and angsty ending and several more (some of which make more sense than others). Joe Kelly even goes back to plot points his “Deadpool” comics used or never got to use, so if you’ve ever wanted to see Blind Al dressed as the Black Widow, today is your lucky day.

Going back to the artwork, Mike Hawthorne continues to bring his A-game no matter what the scene or context may be. While the action may be fast-paced and filled with enough action lines and impacts to make you feel each hit, the more emotional scenes get their visual beats just right too. When Deadpool’s mask comes off, the way his face is drawn gives us a fantastic mix of anger and sorrow. A good artist can capture emotion even on Deadpool’s deformed face, and Mike Hawthorne manages to do so expertly.

His style manages to work for each of the alternate endings, from the horrors of office life to a nuclear explosion. The linework is strong and detailed, with clean, solid character designs throughout. There’s seemingly no limit to how much he can fit properly in a single page, from a post-apocalyptic beach party to an assembled team of Avengers. Ruth Redmond’s color work keeps every scene feeling alive, with shades and color tones that match the tone and set different moods for each distinct scene.

I may have to dock a few points for how Captain Marvel’s face is drawn in the one panel she appears in, but it’s a small bump in an otherwise excellent issue.

While most “The End” issues provide what could be taken as a definitive end to their respective characters, “Deadpool: The End” takes it in a very different direction, and it’s all the better for it. It has a set of creative talent perfectly suited for the issue, making it a great addition to any Deadpool fan’s collection.

Final Verdict: 8.5 – A joy to read from the first page to the last, perfectly capturing everything that makes Deadpool a great character. It blends the snark, violence, and heart just right, backed up by excellent artwork. The entire team is on top form for this issue.