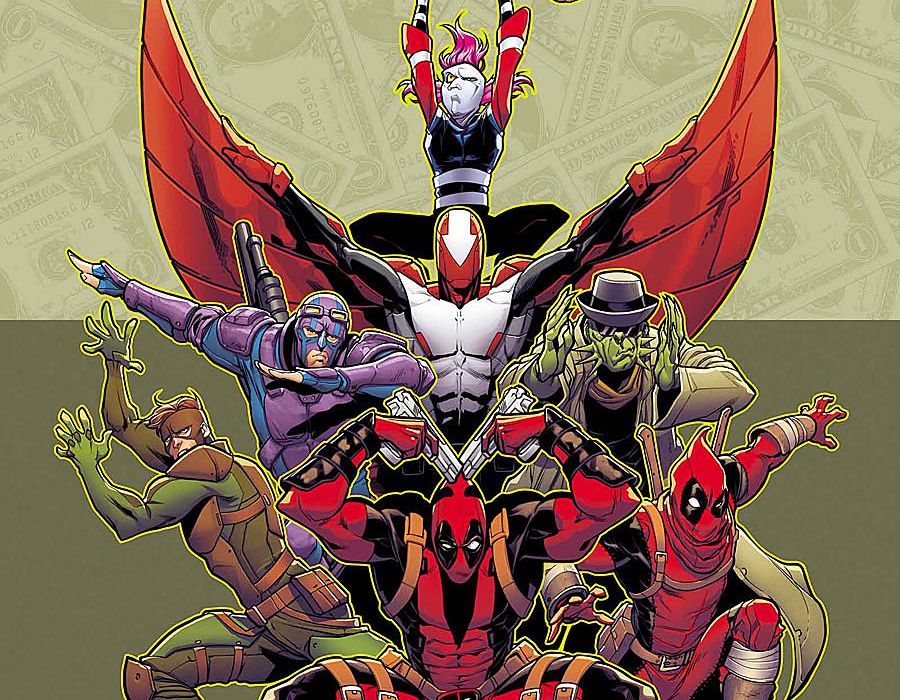 Deadpool and his band of crazy, often murderous, misfits, are at it again. It being high-risk missions for a lot of money. Check out our full review below and watch out for spoilers. 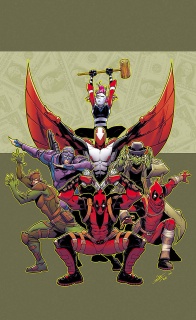 Deadpool is one of the best mercenaries on the planet. He may even be a passable Avenger—jury’s still out. But one thing’s for sure—Deadpool is a terrible team leader. Think we’re lying? Ask the Mercs for Money! Deadpool’s taken on a new high-paying mission to take out radioactive super villains…and his Mercs aren’t nearly as immune to radiation as his healing-factored heinie is. Deadpool veteran Cullen Bunn brings us mo’ mercs, mo’ money and naturally, mo’ problems.

Deadfall’s helping people. Or at least he’s trying to. That’s sort of the thesis to Gerry Duggan’s whole run on “Deadpool”, a run that Cullen Bunn and Iban Coello’s “Deadpool & The Mercs For Money” finds itself directly tied to. If you’ve having deja vu with this comic, you’re not alone. Another “Mercs For Money” series launched earlier this year with Bunn and Salvador Espin, but now we’re rebooting again. Or we’re moving from a mini-series to an ongoing. I’m not totally sure about anything with comics in 2016. Anywho, this latest reboot actually comes at a pretty good time for Wade Wilson’s team for mercenaries. In the solo “Deadpool” series, the group’s been debating whether or not to turn on Deadpool since he’s been prioritizing doing the right thing over living up to the team’s name.

The Mercs’ operation to capture Negasonic goes as you’d expect, and it’s Coello’s mildly slapstick style that makes seven men breaking into a teenager’s home fun. When Negasonic isn’t kicking in Terror’s face, she’s getting glimpses of the future that affect how she’s going to fight. It’s a wonderful trick that immediately lays out how the new Negasonic’s powers work and it establishes a steady rhythm that runs through the rest of the fight as Negasonic dismantles the entire team.

Negasonic’s rhythm gets broken when she comes across Deadpool proper and her flash forward kicks in. But instead of seeing how she’s going to outmaneuver Wade, she witnesses him promising he’ll help get. She immediately backs down, agrees to go and everything seems hunky dory. Until Wade hands her in and it’s made abundantly clear that Negasonic’s going to get tortured by mad scientists as soon as Deadpool bails. Wade, being Wade, immediately feels bad about the situation and considers turning back, but that’s where we hit our snag.

In a typical Deadpool story, Wade would just drop in, kick ass, save Negasonic, and pay off her college debt or something. Unfortunately, Wade has a team of people behind him who already aren’t too pleased with him. They’re also ain’t too pleased with the girl who tore the asses of everyone except their boss. So now we have the ground set for a team that could either learn to come together to save an innocent or completely fall apart. Considering how Deadpool’s life’s been going lately, it’s probably the latter. And that’s a conflict that actually makes sense in the dynamics of this team. If the Avengers argued over whether or not it’s a good idea to kill someone it’d turn into a lanky mess called “Civil War II” or something. But it makes total sense for Deadpool’s Mercs to not want to save Negasonic because they’re in it for the cash. It’s right there in the title. This isn’t just another team book with Deadpool and his wacky friends. It’s Deadpool wanting to do the right thing and seven other dudes wanting to get paid. Maybe six. I think Stingray’s just trying to get back into The Avengers.

The reason I’m into this idea of Deadpool being forced to either fight against his employees or make them learn how to do the right thing is because it’s something we’ve kind of been building to for all of Deadpool’s post-2012 run. He grounded himself with friends like Agent Preston and 30 Rock star Scott Adsit, discovered he had a daughter, and tried to be a better person. He’s distracted himself from that by doing things like marrying the queen of the undead and going down the rabbithole of who killed his family, but Deadpool’s actually trying to find himself on equal footing with The Avengers, unlike Stingray who just keeps talking about how he used to be one. Deadpool’s had a hard time balancing being a good person with who he is, it’s been around four years so far, so seeing how he can try to impose that entire mental journey on a team of guys who showed up for cash is going to be pretty interesting.

Final Verdict: 7.2 – The latest volume of “Deadpool & The Mercs For Money” starts off on a strong note, emphasizing the conflicts set this team apart in a way that doesn’t feel overly contrived. And it’s those conflicts that can turn a one-in-done rescue mission into a massacre. I don’t know if I’d plunge right into the series just yet, but I’d definitely check to see if it’s worth tradewaiting.