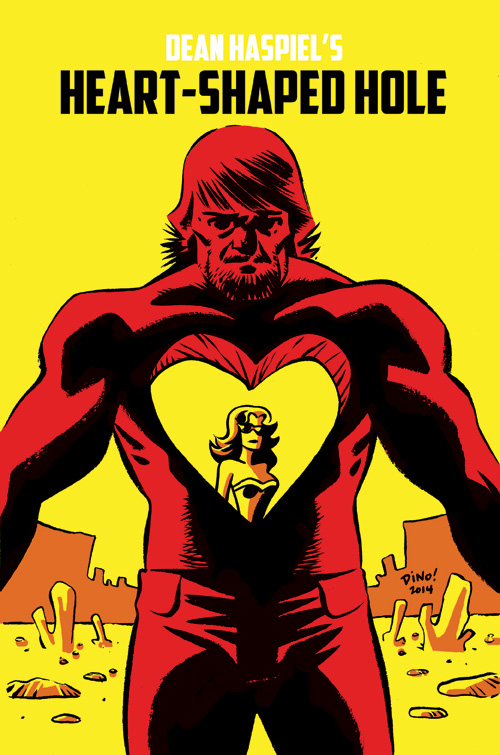 Billy Dogma is back (well, most of him, anyway) in this collection of stories by creator Dean Haspiel. These seven love stories hit like a freight train powered by heart-shaped Kirby Krackle, but sweet enough that you’ll keep lining up to be run over by them again and again. 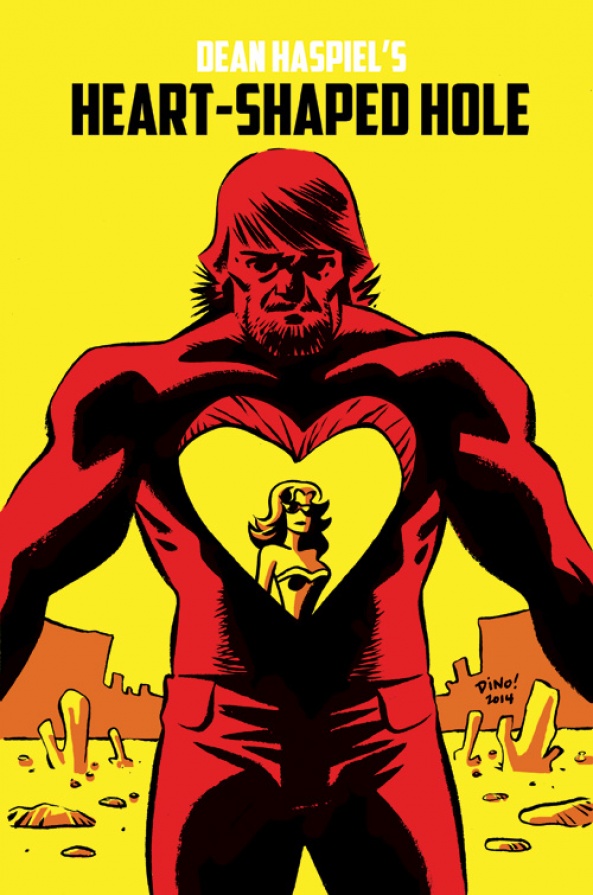 Billy Dogma and Jane Legit punch the apocalypse right in the kisser as their eternal war of woo breaks a Trip City-wide hymen!

In an interview from the ‘Men Without Fear’ documentary from the “Daredevil” DVD, Frank Miller talked briefly about his thoughts behind introducing Elektra during his run on the title. “Why wouldn’t these people be operatic in their romance,” he asked, “the way they are in their combat? These people bring down buildings with their passion; that’s what they do with their fights.” While not every superhero romance has to be elevated to Wagnerian proportions, there’s something in the DNA of superhero comics that gives all creators working in it the license to go bigger-than-life at any moment. And there’s a lot of superhero DNA in Billy Dogma. But creator Dean Haspiel (who grew up on the comics of Miller, Kirby, Chaykin, Simonson, Byrne, and the like) splices it with the autobio gene to give us personal storytelling expressing itself as dynamically as I’m sure it felt to him as he lived it.

“Heart-Shaped Hole” is a collection of short Billy Dogma stories, ranging from single-page strips like ‘Legacy’ and ‘Wet Dreams’ to the much-longer ‘Bring Me The Heart of Billy Dogma’ and ‘The Last Romantic Antihero’. While all but one of those strips have shown up elsewhere before (you can see two of them at Haspiel’s Act-i-vate site), they are presented here in a much nicer and optimized magazine-sized format. There are still some holdovers from the earlier incarnations (like letting font changes and the like), but those don’t stick out like errors so much as just look like seeing letters from an old correspondence written with different colored inks. It’s all part of the charm.

The stories themselves primarily follow Billy Dogma and Jane Legit; their love and relationship cranked up to an 11 so loud even Miller would be proud. Nothing evokes passion more than walking around with a literal hole where your heart would be if it hadn’t been ripped out of your chest from a break-up. But Haspiel doesn’t load his characters or stories down like Miller does in almost all of his work; Dogma and Legit still have a snap like cool kids in love, not a snap like bones being broken. There’s a charm and a zing to this material, even though done bit-by-bit over almost a decade, that keeps tropes and slang done to death by other creators still effective here.

In preparing for our talk about his new run of “Fox” comics, Haspiel told me he intended “Heart-Shaped Hole” to be the perfect Billy Dogma starter kit. And having heard about the character but never really reading the actual stories prior to cracking open this comic, I’d have to agree with him that this IS a great place to start. There’s no specific continuity or chronology you need to follow to decipher the stories; far from it. But characters and situations that seem random, albeit interesting (like the Mad Thinker’s Awesome Android-lookalike that shows up in ‘Angel’), do appear again to fuller use in last year’s “Fear, My Dear” collection, although these two pieces can honestly be read in either order. Think of it like this: “Heart-Shaped Hole” is you hearing about this amazing couple from stories told to you by mutual friends who love them and know them really well, and collections like “Fear, My Dear” are you getting to meet that couple for yourself. So “Heart-Shaped Hole” is a starter kit you don’t HAVE to start with, but you SHOULD if you have the opportunity.

I say ‘if’ because getting your hands on one of these books might be a little difficult. Haspiel is not distributing them through Diamond or comic shops or even his Hang Dai Editions website; for now, the only way to get one is to buy one directly from him at a show like MoCCA (where it debuted) or any of the other stops on his convention itinerary. That may seem crazy, or even BE crazy, but with a book and character as personal to him as Billy Dogma, it doesn’t seem wrong. He told CBR recently:

Heart-Shaped Hole is a 21st century olive branch meant to initiate an intimate, one-on-one experience between the reader and author…Sure, social networking teases at some parlays, and positive reviews are nice, but I miss physical and spirited discussions with people who care more about story than the perceived “collectors item” value of a sealed comic book…Heart-Shaped Hole is meant to bring back the very thing that is missing from my laptop and smart phone: human contact.

So my hope with this review is (to the probable consternation of my editor) isn’t to tell you what I specifically think about this comic so much as convince you that it’s worth getting so you can read it and tell Haspiel what you thought about his comic. Because “Heart-Shaped Hole” is him, in a lot of ways, literally giving his heart to the Billy Dogma readers. And when a creator puts that much of their self into a work, I think that work’s fans should give at least a little bit of themselves in return.

Final Verdict: 8.5 – Seek out and buy. It may not be the easiest comic to get your hands on, but if reading about a love supreme that hits like a Kirby punch and sizzles like something just this side of Chaykin sounds like your bag, then this comic is for you.