“Death Orb” #5 signals the end of the series, and the end of … everything? It’s never quite that simple, and for Rider and his crew, it’s definitely painful. Spoilers to come. 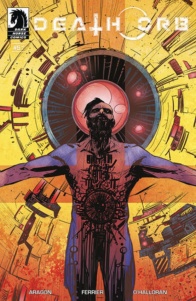 Cover by Alejandro Aragón
Written by Ryan Ferrier
Illustrated by Alejandro Aragón
Colored by Chris O’Halloran
Lettered by Ryan Ferrier
The quest of the ax-swinging wasteland survivor and his crew of rebels careens to an exciting conclusion in a violent final showdown with the mysterious Father and his doomsday cult. Will Rider find his wife? And if he does, what will be left of the American wasteland they live in?

“Death Orb” packs quite a bit of plot into five issues with a great deal of visual acuity, design and unique storytelling flavor. What could’ve been an entertaining but relatively straight-ahead Road Warrior-esque send-up is elevated Aragón & O’Halloran’s extraordinary skill and imaginations. The entire creative team works seamlessly to deliver an excellent comic. In issue #5, each character gets a fitting end and gets enough time on the page to feel like their stories have mattered. Ferrier salts some hard-edged realism with a blatant, and welcome, message about love and connection in the face of obliteration, and to know for sure that this is what’s beating at the heart of such a visually delicious comic is a delight. Rider’s mission is to save his wife and his unborn child, but there’s not much interiority to him that’s explicit until the end of issue #5. Ferrier carries it off really well.

Ferrier has a lot to say about prophecy and pontification in Father, and his end is especially satisfying. A lot of time and energy goes into this final showdown between Rider and Father, and the choice to make it a little anti-climactic is on point for the series’ overall tone, and what the book has to say about its own blasted landscape. How Rider’s tale wraps is heartfelt and real, and in such a short amount of issues – and with a somewhat spare personality to boot – the book runs the gamut from murder and black humor in issue #1 to completely relatable humanity in issue #5. That’s a hard road to tread in any story, much less a comic featuring nearly a dozen characters. Ferrier holds down characterization by never breaking tone in dialogue and never losing sight of the bombastic nature of this particular apocalypse, even as he tempers it with some grounded emotion at the end.

Aragón’s art is stunning. His scratchy line and kinetic action never sacrifice clarity or style, and Rider’s arms-akimbo homicides take on more and more weight and tension as the story progresses. In issue #5 he’s seriously hurt for the first time, and Aragón chooses to wrap the story with a very measured, tender and slow moment between Rider and Pilot. Rider bounced through a hail of carnage to get here, and slowing the pace is key to carrying off “Death Orb” as a package. There’s a gorgeous double-page spread to digest in this issue, as well as the cavernous inner workings of Father’s lair for some serious scale. With all the action to date, confusion or dislocation is rare, and with as much going on as there is throughout “Death Orb”, that’s a significant accomplishment. It’s also rare to find a comic in which lingering on each panel to see how it works is as enjoyable as experiencing the page as a whole.

O’Halloran’s purples, blues, reds and yellows are on fine display here, with pops of other colors for good clarity between several locations. There’s no background that’s untextured, no detail called out without intention and no high-contrast panel designed without supporting the book’s overall mood. O’Halloran’s work is delightful, moving and subtle, down to the multiple hues of blood in this issue alone. “Death Orb” as a whole is on par with a prime “Mister X” or “Grendel” issue, with all of the grit and unrestrained indie goodness of those deep color palettes.

Ferrier’s lettering is on point as usual, with narrow balloons, economical tails and that lovely, twitchy font that’s enhanced every issue so far. The typeface has done a great job of accenting every emotion in the series, from slick humor to outright pain and loss, and it serves the entire narrative exceedingly well while keeping the comic readable. There is a lot of action on the page here, and the lettering is a great guide without cluttering more kinetic scenes.

The title of the series sums it up – there’s a giant ball falling from the sky, propelled by the mad desires of a very weary despot, and it’s up to a small and sarcastic group of people to save the day. And they do, but the world that they now have to live in is still very messed up. “Death Orb” really is the complete package: entertaining, beautiful, fun, cool, funny and, ultimately, far deeper than it needs to be to support its top-notch aesthetic. Ferrier, Aragón and O’Halloran are a dream team, and anything that comes from this crew in the future should definitely be on all our pull lists. The collective creativity and skill each brings to the table makes for a very fine comic, indeed.

Final Verdict: 8.5 – “Death Orb” #5 delights in ways you won’t expect while maintaining its gut-punching high action and high level of craft up to the very end.