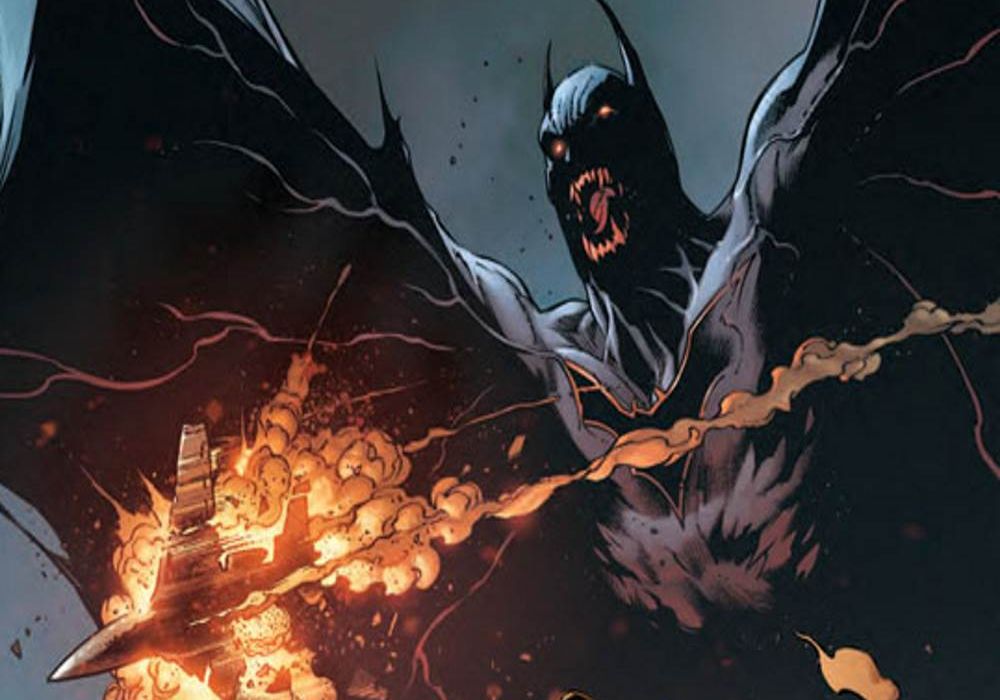 Slade Wilson is the coolest. That’s pretty much the entire premise of the character. He’s a slick, amoral super-assassin who does whatever he wants and looks damn fine while doing it. He’s got a magic sword. He looks great in an eyepatch. The entire character is rooted in being the best at everything. So how do you create a challenge for such a man? You put him head to head with the goddamn Batman. 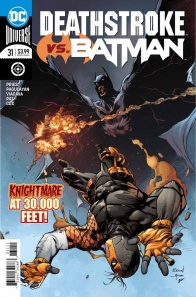 “DEATHSTROKE VS. BATMAN” part two! The war between Deathstroke and Batman escalates when the Dark Knight foils one of Deathstroke’s assassination attempts! Meanwhile, a mysterious package brings Commissioner Gordon to Bruce Wayne’s doorstep, and Adeline Kane—Slade Wilson’s ex—sets her sights on Batman!

“Add Batman to it” is usually the lamest, cheapest move a writer can make in a DC comic but Priest totally earns this head-to-head. The problem with writing super-competent characters is that you need to be operating on their level. How many times have you read a story about an alleged super-genius only to be disappointed with how stupid they really are? That’s not the case with ‘Deathstroke vs Batman.’ These two are believably the best in their respective fields, crime and crime-fighting, and watching them circle towards each other has a surprising amount of weight and gravitas.

As we all know from weaker versus stories, adversaries can be fun, but there needs to be an emotional core. If the reason for the fight is weak, the fight won’t stay interesting. That’s the wildcard element of ‘Deathstroke vs Batman.’ Priest would have us believe that Slade not Bruce is the father of Damien Wayne. In a different sort of serialized story secret parentage would be a great twist, but it’s hard to believe that DC would follow through with it. The looming switchback removes some of the teeth from the conflict, but serves its purpose. The rivalry between these two men is as personal as it is professional.

In assessing the whole story, the execution of this plot element would be key. As it is, we are only looking at this issue, and the tangled thread between Wilson, Wayne, and the Al Ghul family is good stuff. It makes the plane crashes, desert dust-ups, and midnight threats into the kind of soap opera a superhero comic should be. It’s one thing to have deceptions and fistfights, but its another thing to make those things mean something.

As for the fights themselves, they are well delivered by an expansive art team. Including the inker and the colorist, the issue has five credited artists. As such, its hard to assign credit to any one contributor. The whole thing comes out looking like DC house style. That’s not a bad thing, but it doesn’t do too much to excite either. The superhuman protagonist and antagonist loom larger-than life in full page spreads. The action feels heavy and kinetic. There are a few quiet sequences of talking heads, and each of these panels convey a different emotional beat.

I’d love to say that these artists brought a lot to the table, but you can feel the strength of Priest’s script with every beat. One black and white four panel sequence of an interview with Robin demonstrates this well. In the first panel he looks angry, defiant. In the second, his face doesn’t change much, but his shoulders slump, he looks away. Then in the third he’s jabbing his finger, unable to control his anger. Finally in the fourth he clutches himself and looks away. Is the sequence well drawn? Absolutely. But I’d bet you each of these beats was meticulously planned by Priest and laid out in his script. Marvel method this is not.

Meticulous is the operative word here. Everything feels meticulous. That’s actually my main criticism with Priest’s recent DC work. Everything feels so deliberate and planned that there is little room for the characters to breathe, to have quiet moments of emotion. That weakness is this issue’s strength. Deathstroke is a cold-blooded hardass. Batman’s not a hugger. If ever there was a time for calculated storytelling, this was it. Priest is a genius with sprawling plots, and watching this story play out is dizzying.

If you divide this issue up and look at the art and the writing separately (which you should never do) the writing impresses in ways that the art does not. When looked at in tandem, a more generous way of putting it is to say that the house style of the art gives a lot of room for the labyrinthine story. This isn’t disingenuous, it’s actually kind of refreshing. A lot of series feature silent issues to put an emphasis on the storytelling through the art without distraction. “Deathstroke” #31 is the rare issue that uses simple art to emphasize the complexity of the plot and characterization.

Final Verdict: 8.0 – Priest has found two characters as calculating and brilliant as he is. Two unbeatable characters collide, and I have no idea how it will end.