Deathstroke has been butchering his way through Paradise Island in order to kill a Titan for, uh, reasons. With Wonder Woman at his side, find out if Slade Wilson can handle himself in the world of gods and monsters. Spoilers: yes, he does. Real spoilers ahead! 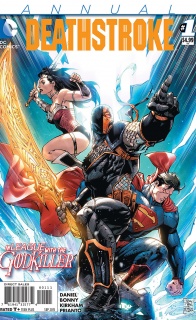 The “Godkiller” bloodbath continues as Slade uses his new weapon to cleave through the world of the supernatural! And which side of this conflict will Superman and Wonder Woman fall on?

“Deathstroke Annual” #1 is basically just another issue of the main “Deathstroke” series, which is a shame because it’s the type of comic I could only stomach once a year. This issue stars Deathstroke, or rather New 52 Deathstroke: a character so bland that he gave ex-Multiversity Comics writer Patrick Tobin amnesia. He’s Deadpool with the personality of Homeless Dad from Arrested Development. I am Michael Bluth in that clip.

Under the auspices of Tony S. Daniel, Jim Bonny, and Tyler Kirkham, Deathstroke has gone under a few changes in his latest series. For one, he’s become young and handsome because every male DC character needs to look like Bruce Wayne or Clark Kent. For two (I don’t know how this listing system work), he’s been tasked to kill a Titan with a sword named “Godkiller” which is already a colossal fuck up. He’s killing a Titan, not a God! Was this comic trying to trick me into thinking it would guest star Gorr the God Butcher from Aaron and Ribic’s run on “Thor: God of Thunder”? I was hoping it would. That said, I do like the idea that Deathstroke swore to kill every last Teen Titan, but can’t really tell them apart from mythological beings. He’s going to be in the middle of stabbing Chronos before going “Oh wow, you’re not Beast Boy.” Instead of any of that, Deathstroke runs around while some magic stuff happens and he impales a couple demons while talking about Wonder Woman is “as beautiful as she is deadly” which is the most cliche comic book line of all time. Quote William Blake’s “The Tyger” while you’re at it.

Really, this whole comic is full of cliches. If you took it one of those nerds who reads “real books”, they would say this is exactly what they expected a comic to be like. There’s a not-ninja slicing up zombies, a woman standing next to him while he does that, and the hackneyed scene where the hero sees their loved ones telling them to stop fighting but it’s all an illusion. At least Wonder Woman sees through this trick and immediately calls bullshit. You need one relatable character, right? Meanwhile, Deathstroke just turns into this.

At this point, I should make it clear that “Deathstroke Annual” #1 is far from the worst comic ever. Writing wise, it’s mediocre but an exceptional sort of mediocre. The type where you’re up at 1 AM trying to describe anything from it but are unable to. I will praise Tyler Kirkham’s art however. His army of the dead marched right out of a Gulermo Del Toro flick and their eventual super combo into a giant Mindless One was admittedly radical. If this a book trying to be cool and edgy, then Kirkham is all the credit it has to that claim. Unfortunately, one thing stuck out to me that I was unable to unsee.

Deathstroke can’t keep his helmet on. It’s something that you notice al little bit at first when Deathstroke enters the vision with his dead family. You figure it makes sense that he has his helmet off, so we can see the emotions on his boring white man face. Then a fight between an old man’s idea of terrorists breaks out and he has the helmet back on. Okay, he had time to put it on for a shoot out, that’s fair. Then Slade’s kid kicks his helmet off and it comes back on in the next page with absolutely no time for it to be equipped. Sade’s helmet is a straight up helmet, and one that doesn’t seem easy to put on. Slade can’t take it on and off all the time, it’s not attached with velcro. This whole paragraph may seem nitpicky, but this was the most distracting element of a book starved of little else to draw my attention.

Once Deathstroke has decided to keep his head bucket on, the comic kind of ends. Wonder Woman and Deathstroke are determined to kick ass. That would honestly be an okay ending if this were “Deathstroke” #8 but it’s an annual. This should be a chance for the “Deathstroke” creators to show my why I should be interested in their take on the character, no? Why waste that chance by doing the middle of a story without any beginning or end? I was going to make that Homeless Dad joke anyway, I’ve been saving it up for three years.

Final Verdict: 5.6 – “Deathstroke Annual” #1 is certainly a comic book. There’s action, one-liners, and a woman in tights. There’s also some really strong artwork from Kirkham. Unfortunately, there’s nothing that ties any of these factors into a story that I would actually recommend to people.