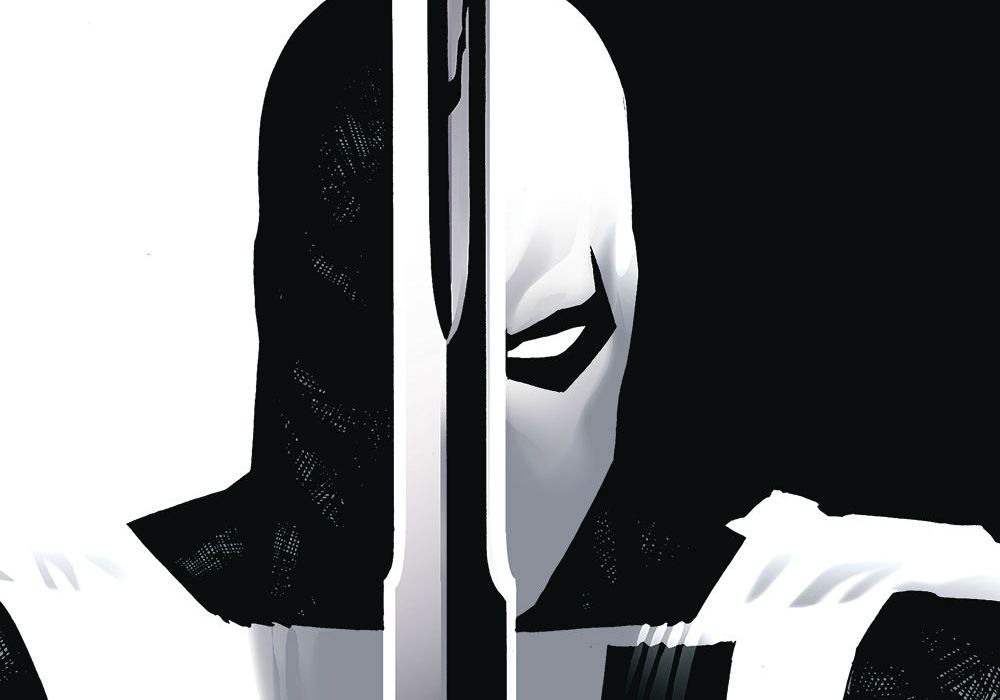 After hitting one of his lowest points ever, Slade Wilson tried to rebuild his life by renouncing killing and creating a team of superheroes. However, Slade hasn’t been finding this transition easy or simple. “Deathstroke Annual” #1 shows how people can repeat patterns of behavior no matter how much they try and break the cycle. The special issues also shifts artistic creative teams and marks a couple huge milestones in the series’ overall plot, but does the oversized comic come together as a cohesive narrative? 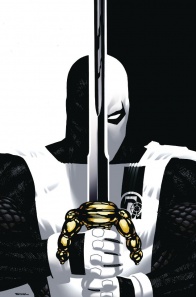 “An Innocent Man”! Team Defiance is pushed to the edge of oblivion when one of their own ends up dead—and Deathstroke is to blame! Is this the end of Slade Wilson’s hero turn? It’s all been building to this—don’t miss the finale of “Defiance,” the events of which will lead Deathstroke down a shocking new path!

In “Deathstroke Annual” #1 Slade Wilson is innocent until he proves himself guilty. Despite the promise of Defiance, Wilson has not been living up to his name or his attempts to be heroic. This annual is full of all the double-crossing, mystery and second-guessing of previous installments laced with extra paranoia and depression. When Deathstroke becomes involved with the other members of Defiance and his greater family, he only leaves a path of destruction in his wake marred by poor decisions and choices leading him towards a breaking point. Deathstroke’s life is dominated by a poor set of decisions and greyed moral fibers which should repel the members of the team like his ex-wife far, far away from him–but like this book, real life is messy and complicated.

This installment dives deep into Power Girl’s psyche, analyzing why the character has stuck with Slade after all this time and how she suddenly now has an extraordinarily difficult time adapting to life around her. With such a sheltered upbringing and out-of-touch view of the world, Tonya now has to figure out her own moral code but now she is in the presence of the most morally fractured characters in the DC Universe. Even Jericho gives her the cold shoulder as he was once the most innocent character in the DC Universe back in the “New Teen Titans” days.

The issue is full of shifting allegiances and characters falling back into the same old patterns that got them where they are today. The title of the issue, dubbed ‘An Innocent Man,’ is a definitively ironic statement. While television and film have analyzed the anti-hero genre, superheroes haven’t been deconstructed in a long-form manner with as deep a characterization as this most recent “Deathstroke” comic has provided readers. The most direct example this issue offers up is Slade’s stilted and violent relationship with his ex-wife. Over the past couple years, Priest has shown an adept understanding of Wilson painting him as a deadly unforgiving and unloving superhero/villain assassin.

With this particular  being an annual, the artistic teams change from the ongoing series and artist Denys Cowan joins the fray (with breakdowns by Larry Hama and inks by the legendary Bill Sinkiewicz). This creative team is a group of seasoned professionals bearing an old-school sensibility. I really enjoy what they bring to action sequences as Hama’s breakdowns still feel incredibly fluid and tense. The slightly abstract sensibilities Sinkiewicz and Cowan bring to the narrative makes for a fluid page layout and high octane energy that I thoroughly enjoyed.

At times, I wonder if the reason why so many creators were brought on board the art team. I believe all the creators on the title may have been strapped for time when they were putting the work together. Some pages, like the scenes at Titans Tower shows figures depicted as kind of scratchy and lanky. These moments detract from the overall momentum and layout of the story in general. I do think the gritty style Priest is going for utilizes the team well but aside from those moments, there can be a tonal clash with the artwork in the comic.

While Deathstroke has a tendency to be dark and dreary, this new issue of the comic is particularly difficult to get through packed with some of the most depressing scenarios the creators have ever put forth. Thankfully, the issue ends with a burst of strange happiness depicting a counterbalance and tonal shift with what came before. “Deathstroke Annual” #1 is a challenging and progressive comic placing Slade’s darkest truths out in the open. Certain moments start to reveal a change or shift based on the psychological damage Wilson inflicted on the cast over time which cannot be healed.

Final Verdict: 8.0 – “Deathstroke Annual” #1 plays off Deathstroke’s corruption of character and explores how he has damaged those surrounding him.