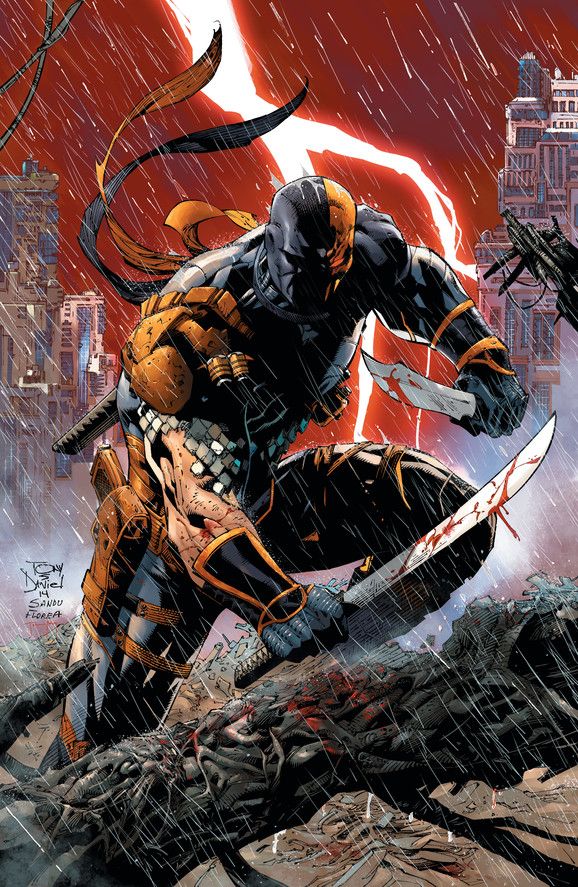 Fresh off the biggest period of multimedia exposure the character has ever experienced, Slade Wilson is back in the pages of his own solo series. 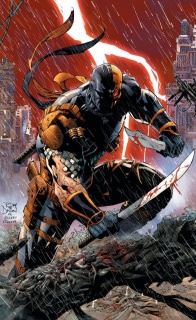 The DCU’s deadliest assassin stars in his own ongoing series by writer/artist Tony S. Daniel! See him as never before in this explosive new series, with one surprise after another as we see Slade Wilson in the fight of his life!

“Deathstroke” #1 is DC’s second attempt of a New 52 series for the character, but now Slade Wilson’s role as an Arrow baddie and an appearance in the popular Batman: Arkham video games series has introduced the character to a new audience. It would make sense that DC would seize on this opportunity, but the version of the character found in “Deathstroke” might seem a little strange to long-time fans of the mercenary.

“Deathstroke” finds Slade Wilson awaiting his next assignment, like any eager assassin. Soon Slade is on a plane to Russia, taking out an entire briefcase full of targets. This is classic Deathstroke, and he comes off like the unstoppable terminator he was once named before James Cameron came around and messed up the rights. He runs across old allies and new enemies, even sports a cocky line or two, before things go dramatically wrong.

Tony S. Daniel, fresh off of “Superman/Wonder Woman” handles both writing and artwork for the re-launched “Deathstroke”, and he kicks off the Slade Wilson rebrand on the first page. While traditionally cast as the villain or grizzled anti-hero, Daniel paints Wilson as more of a misunderstood adventurer. It makes sense, as any good villain with a bit of depth never sees themselves as a bad guy. It’s impressive that Daniel avoided the big trap of including pages and pages of exposition-filled flashbacks. There’s no quick montage of Deathstroke’s great hits with cameos from DC’s big heroes crammed into a couple of panels. Instead, there’s a simple set up of Deathstroke in action with minimal narration, and it’s a very clean way to start the book.

Daniel has previous experience drawing Deathstroke during the the Johns/Daniel “Teen Titans” run, and his familiarity with the character shows in the art. Daniel’s style is quite realistic, and his hard lines and edges set the tone for a more street level view. Although the dialog barely hints at Deathstroke’s past adventures, Daniel draws the character a fully stocked weapons room which, when combined with the character’s grey hair and wrinkles, visually hints at the long and hard life this character has led. This theme continues with character designs for Angelica and Possum, the issues two largest supporting characters. Angelica has a gnarly set of scars on her face, while Possum looks like if Joker and the Penguin had an unholy demon spawn. These characters are a long way from Metropolis, that’s for sure.

The action starts about four pages in, and Daniel immediately sets out to give Deathstroke fans exactly what they want. Almost every page is an action set piece, and they are very effective. The first double page spread is a classic shot of Deathstroke in sword cleaving action, framed by smaller panels highlighting his brutal efficiency. If you like your comics bloody and violent, this issue is for you. Daniel doesn’t pull any punches with the art, and severed limbs and decapitated heads fill the panels. The art is well done, and is surely what long-time fans want from a “Deathstroke” book, and the violence only leans to the side of untasteful during one particularly gruesome panel featuring Angelica and Possum. Definitely not a book for the kids.

The most unique bit of art comes when Deathstroke is subjected to a weird mind/sense jammer and is nearly incapacitated. The detailed background of the room is immediately replaced by a flashing collage of colors and static. Colorist Tomeu Morey deserves a special mention for this sequence, as his bright colors mixed with Daniel’s abstract art provides a great visual interpretation for what the character must be feeling.

For longtime fans who have followed the character for years, through various series and team-ups, this book will definitely seem like a strange read. One of Deathstroke’s signature traits is that he is a tactical genius, capable of analyzing any situation and coming up with multiple scenarios in seconds, while waging a fire fight at the same time. He can even use 90% of his brain, while the rest of us can only muster up a measly 10% to process Superman flying by. While that was probably more impressive before it was pointed out that the whole 10% thing is just a myth, the point is that Deathstroke is a veritable genius on the battlefield.

The problem is that here Deathstroke is completely reactionary, and nothing really goes his way. While his expanded brain function is mentioned, he gets out of this deadly situation by reacting, not thinking. Given that his hyper-active mind is one of the character’s most notable traits, it feels strange that it was left out. Surely Daniel has plans to explore this facet of Deathstroke, but without that set up in a #1 issue, the result comes across akin to just the Punisher with swords.

If you know Slade Wilson as the raspy voiced bad guy from Arrow, you’ll likely be satisfied with this issue’s reinterpretation of the character as hardass adventurer. The bright side is that it at least seems like DC has a much clearer vision for the character than seen in earlier New 52 appearances, and the story is fairly entertaining and never drags. Daniel’s art is fantastic and the book definitely hits its severed limbs quota. For longtime fans of the character, however, there are still a couple missing key elements that keep the issue from feeling like a truly classic Deathstroke story.

Final Verdict: 6.5 – While the great art from Tony S. Daniel is probably enough to get fans on board for the first few issues, he needs to get a firm grasp on the classic Deathstroke character traits if the series is to have real legs.