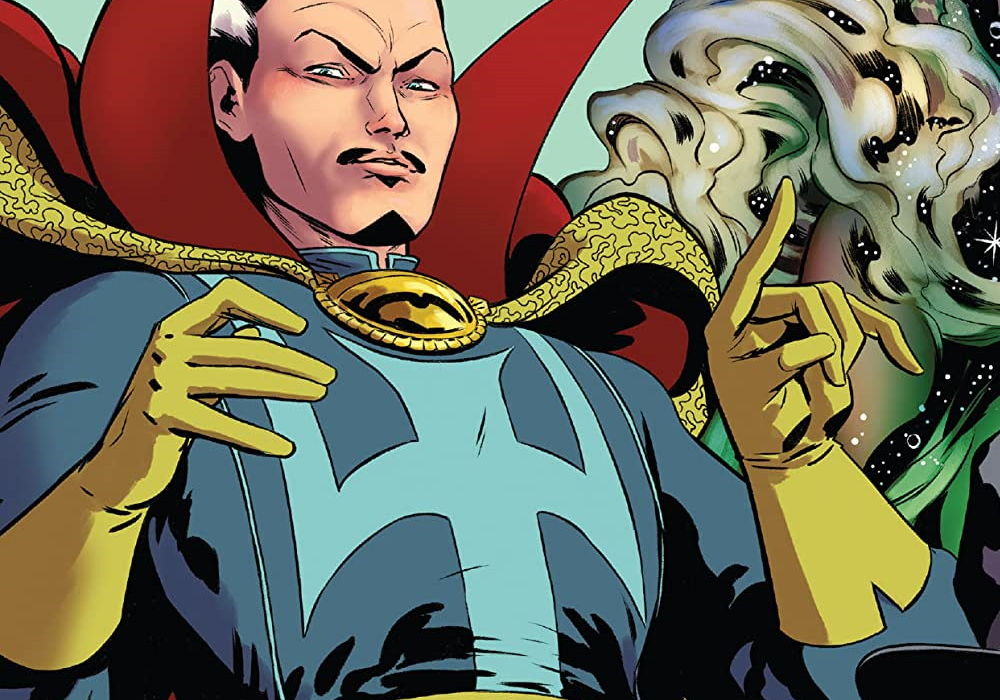 Creating a compelling team of superheroes isn’t an easy task. There needs to be a delicate balance as creators consider things like power sets, interpersonal dynamics, and even something as simple as how the characters look together in a splash panel. There’s something fun about watching a team coalesce, whether by choice or with a reluctant reservation, but rarely do you see a team formed entirely by the cosmos itself. By creating a seemingly random and possibly unwilling team, Al Ewing gets a chance to make some engaging interpersonal drama as members of the team not only have to work together but figure out what they are even doing in the first place. In “Defenders” #1, Ewing creates not only an intriguing team but an intriguing mystery for them to explore, embracing the chaos of the cosmos and letting Dr. Strange confront the very mysteries he has devoted his life to studying. 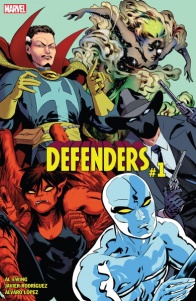 Cover by Javier Rodriguez
Written by Al Ewing
Illustrated by Javier Rodriguez
Inked by Alavaro Lopez with Javier Rodriguez
Colored by Javier Rodriguez
Lettered by VC’s Cory Petit with Jay Bowen
SUPERSTARS AL EWING & JAVIER RODRÍGUEZ REUNITE FOR A COSMOS-COLLIDING JOURNEY! When existence itself faces extraordinary threats, it needs an extraordinary defense! That’s when you call…THE DEFENDERS! DOCTOR STRANGE and the MASKED RAIDER take a non-team of Marvel’s weirdest, wildest heroes on a mission that will uncover the hidden architecture of reality itself! This cosmos was not the first to exist…but if the DEFENDERS can’t track Marvel’s oldest villain through the deepest trenches of time — it might be the last!

There’s a lot to like about “Defenders” #1. One of the strongest elements is Ewing’s narration, which continues to build on the worldbuilding Ewing has accomplished in his other ongoing titles at Marvel, bringing Earth’s Sorcerer Supreme into the cosmic struggles of characters like The Hulk and The Masked Raider. Ewing wisely chooses to make Stephen Strange the focal character of the issue. While this is not uncommon, Doctor Strange is, after all, the one who usually assembles the Defenders; he is not up to speed on what is going on. While he’s aware of the mask made of a piece of Eternity, he doesn’t know the new person taking on its powers. While he knows Betty Banner, he doesn’t seem to understand why the cards have chosen her. As a result, strange’s narration reads as slightly overwhelmed, a man who is so used to being in control surrendering himself to the power of the cosmos and reacting with confusion to the cards the universe is choosing. While this seemingly puts Strange at a bit of a disadvantage, it enhances the story overall.

Of the thematic elements of “Defenders” #1, the most effective is the throughline of the tarot and what it means for the team that Strange is creating to protect time itself. As Strange pulls each card, there is something wrong with the drawing, each figure drawn in reverse, representing an inversion of what the card means. The Magician is looking for new experiences. The Hierophant is representing a challenge to the status quo, Judgement in the form of self-doubt. All of these figures in reverse suggest that this team will be one full of strife and butting heads. Even the conclusion of the issue has them not only out of time but not entirely sure what they’re doing there. The reason this works is that so much of the issue revolves around Strange surrendering himself to the very thing he’s sworn to study. Magic is a vast, unknowable thing. By surrendering himself and his ego, Strange becomes a pawn and perhaps will begin to regain some level of the humility he learned when he first became the Sorcerer Supreme. It’s intriguing to be as in the dark about a situation as your protagonist and their team. While there have been many recent comics that have not done an effective job of landing the hook of their mystery, Ewing effortlessly does this by making the characters as overwhelmed as the reader. We are all in the dark, which means we are all coming to these big revelations together.

While Ewing’s script creates an overwhelming unknowing of the cosmic world, one that Strange and his compatriots have to surrender themselves to protect the fabric of time itself, Javier Rodríguez’s art gives some fantastic visuals to the world of magic. Rodríguez presents magic in a few different ways, providing different forms and tones to magic for combat, summary, or even exposition’s sake. Two engaging sequences come when Strange first fights the Masked Ranger. Initially, the sequence is vibrant and colorful as the two spars using their magical means. Still, when Strange realizes he is on equal footing with his opponent, he uses the magic of the Onyx King, a temporary magic buff. While the magic fight was bright and colorful, the void of magic was gray and shadows. It not only gives Doctor Strange a chance to show off his physical prowess but shows what a void of magic can be, a dark and shadowy world. The other sequence is the drawing. Between the illustrations and the colors, Rodriguez creates poses and backgrounds that are evocative of the Tarot they are being summoned by, embracing abstract backgrounds and creating brief glimpses of their worlds. In general, the book’s coloring helps to make “Defenders” #1 feel mystical and mysterious. Many backgrounds both in the Sanctum Santorum and The Masked Raider’s memories are abstractions of color. Much like Ewing’s script, the art adds to the overwhelming situation that Strange and his team find themselves in. They are small pieces in a larger tapestry of the universe, random cards in an extensive cosmic deck.

Another thing that helps create the mystic feeling of “Defenders” #1 is Alvaro Lopez’s inking throughout the book, creating voids where bright and dynamic colors struggle to break free. One of the most impactful images is the Silver Surfer and Masked Raider’s silhouettes when Harpy confronts Doctor Strange. In this panel, you can see the impact of a good inker, creating a sense that there is something not quite right about this team but that it might be the only hope the multiverse has.

The not knowing is one of the things that make this premier issue so compelling. Throwing a time peril into the mix creates a promise of a groovy multidimensional, multitemporal adventure with a confused and reluctant team. That’s the kind of setup to bring you back to a story, even if you’re not quite sure what is going on. In any case, it’s exciting to see how Ewing is going to take “Defenders” #1 and connect it to the rest of the stories he’s crafting in the universe. With the work he’s been doing, you know it’s going to be a wild ride.