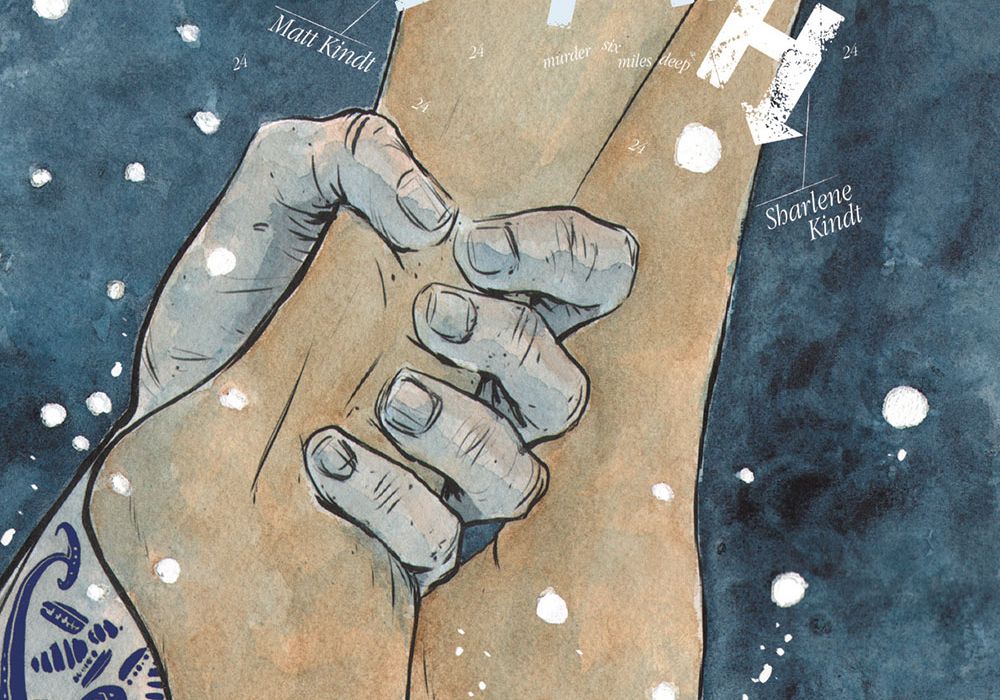 Two years ago, Matt Kindt introduced readers to the the underwater world of Dept. H. and set the table for a claustrophobic Agatha Christie-inspired locked-room murder mystery. As the series progressed, it became something more than its premise, and with issue 24, Matt Kindt brings the story of Mia Hardy’s investigation of her father’s mysterious death to an elegiac conclusion. SPOILERS, AHOY. 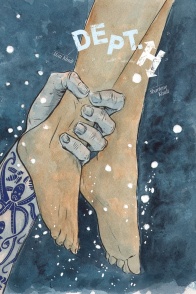 As Mia heads to the surface, she has a vision and realizes that the answer to Hari’s murder isn’t as clear-cut as it first seemed . . . a mystery as complex as the man she called Father. The final issue!

“Dept. H” #24 reads like an epilogue, a coda to Matt and Sharlene Kindt’s beautifully-rendered deep sea murder mystery that casts the reveal of the killer from the previous issue in a different light, reframing Kindt’s story into something transcending traditional whodunnit tropes. Opening with a flashback to a stateside murder investigation from Mia’s detective past that carries thematic similarities to her current predicament, the story shifts to Mia’s agonizing and seemingly interminable swim to the surface, not knowing what world awaits her if she’s lucky enough to reach it.

The essence of Kindt’s series-ending script is philosophically heavy, turning to ruminations on the meaning of life, the pursuit of happiness, one’s obligation to humanity, the stewardship of the planet, and the significance of family. Heady stuff for someone on the verge of death. It’s as though this is Kindt’s take on the concept of one’s life flashing before one’s eyes, where the sum total of existence can only be truly contemplated and understood in these types of dire life-threatening circumstances.

Perhaps borrowing from the logic of Spock in Star Trek: The Wraith of Khan, Kindt allows Mia to consider not just whether the needs of the many outweigh the needs of the few, but what that Vulcan ethical principle means as she finds herself alive, stranded, and in possession of a formula that could offer the potentially short-lived salvation of a humanity that perhaps doesn’t need or deserve saving. Kindt distills these quandaries into reflexive flashbacks subtly juxtaposed against Mia’s own drive for survival.

The presentation of the latter is truly beautiful as Matt and Sharlene choose to show the present day events unfolding not as a harrowing Jack London woman vs. nature fight against death but as a calm extension and acceptance of human nature. We survive. Against all the odds, we live, without even knowing why it’s so important. Jettisoning the claustrophobia-inducing panel layouts that permeated the series’ previous installments, Kindt uses larger panels filled with wide-lens images rendered in his trademark style to present a death-defying but somehow tranquil narrative that eschews emotion and panic for something more akin to instinct and a kind of resignation. Thematically these layouts serve to echo Mia’s freedom from the past and the structures that confined her.

It’s an astonishing achievement by the Kindts, making Mia’s self-serving drive to live into a thing of beauty, casting it against the enormity of the ocean and its dangers and unending mysteries that would not be unlocked in a thousand lifetimes. This narrative which frames the bulk of this issue’s 24 story pages spans an indeterminate amount of time, but Kindt does not feel compelled to give us text to mark the time exactly (Mia herself loses track) or recap the events that we’re not seeing. In fact, it’s precisely the opposite. Kindt saves the heavier and more detailed scripting for the flashbacks, showing the present day narrative as crystallized, spartan, and pithy excerpts of Mia’s inner monologue.

In the end, Kindt elegantly reveals Mia’s next move beyond merely surviving by flashing back to an evening in her childhood. On the surface, it’s a teaching moment with her inscrutable and intelligent father, and Kindt shows it to reveal the limitations of Hari’s tutelage and the influence of Mia’s mother. It’s a touching interlude that reveals how this seminal moment might have driven Mia to pursue a different kind of life, with a different moral compass, one not so set on the constellations. Only now does Mia truly appreciate its significance. In the final pages, Mia settles her answer to the question of nature vs. nurture by revealing it to be both and neither, it’s a self-determinism informed by mind, body, and soul.

Looking back on the series, one could plausibly surmise that revealing the mystery of who killed Hari Hardy was never Kindt’s primary goal. It was merely a vessel to tell a story with these larger philosophical underpinnings. The death of a parent is fertile ground for that type of narrative. There’s a certain acceptance of one’s nature in the wake of such an event, and readers watched Mia progress through the stages of grief as the story unfolded. Kindt captures this concept beautifully in this final issue, and now that the series is complete, it’s easy to see how this story will welcome rewarding rereads.

In previous titles, Kindt’s work has been famously scrutinized for visual clues, tidbits of text information, breadcrumbs leading to the story’s conclusion. If the reader could only decipher them closely enough they may arrive at a story’s logical conclusion where a casual reader would merely find themselves pleasantly surprised. In “Dept. H.” it’s as if Kindt toyed with this expectation. While we were following one set of clues, we might have failed to follow the clues to help solve the real mystery? It’s the greatest mystery there is: What is life? And what do we have an obligation to contribute?

Final Verdict: 9.0 – Matt and Sharlene Kindt are at the top of their storytelling game, and “Dept. H” #24 is a moving swan song that reveals the depths of the series’ true mystery.