“Descendent” #1 doesn’t waste any time laying out its premise and setting the plot in motion. (Warning: minor spoilers ahead.) 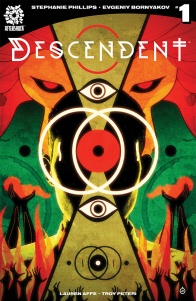 Conspiracy theories, government corruption, and a really good mix of Prince drives David Corey to help solve the mysterious disappearance of a famous politician’s son. When David realizes that the truth is much more dangerous than a kidnapping, he must battle ancient secrets that have endangered the lives of children for centuries. This conspiracy-fueled adventure story looks at the darker side of American history through the eyes of an unlikely team of heroes. If they fail, the American government and its people may not survive. Stephanie Phillips (Devil Within, Kicking Ice) and Evgeniy Bornyakov invite you to uncover a legacy of mystery, murder and paranoia in which the more you know, the more you don’t.

“Descendent” #1 is a study in contrasts and juxtapositions. Virtually every facet of the book – from it’s well crafted narrative structure to its visual aesthetic to its flawed but likable protagonist – seemingly establishes a particular tone or mood, only to undercut those expectations moments later, suddenly becoming something quite different from what you first imagined.

Juan Doe’s incredible cover is the perfect example. Before the story even begins, Doe throws down the gauntlet, challenging the reader with an abstract, highly symmetrical, multilayered front cover packed with visual metaphors, creepy symbols and reference to the occult. It’s trippy. It’s weird. It’s unsettling. And it definitely raises way more questions that it tries to answer.

Using Bornyakov’s pitch-perfect visual details as a springboard, Phillips vividly and efficiently introduces Carter Miller, an ambitious, controlling, self-aggrandizing white male politician who decidedly places his own carefully cultivated public image and presidential aspirations well above the needs of his family, especially those of his subservient wife. Having neatly established the couple’s unenviable dynamic – in a mere two pages of clear and concise backstory – Phillips wastes no time diving straight into the plot.

Would-be President Miller’s baby boy is missing and the only clue to his whereabouts is a ransom note written in broken English with an ominous looking symbol at the bottom of the page. Not coincidentally, it’s a variation of the same symbol – comprised of two interlocking circles – that appears twice on the front cover and again once more on the inside front cover.

Even less conspicuously, the symbol also lingers in close-up at the bottom of the page, as though punctuating the scene, conspicuously juxtaposed next to the baby’s empty crib. Turn that page and — damn! – there it is again, inadvertently made by two overlapping stains left by a coffee mug. (A wonderful visual transition, by the way.)

From there, after a brief moment of comic relief, the story kicks into high gear, like a runaway pickup truck smashing through a security gate. Which is exactly what happens in the very next scene.

Honestly, from start to finish, the story is impeccably paced, with a tightly written script and an intuitive visual flow that supports the dramatic action superbly. Similarly, the characters are well rounded and undeniably entertaining. David, the scruffy conspiracy theorist, is especially engaging in his role as the “lovable-loser” who is simultaneously paranoid and right. He knows exactly what the government is up to and he’s determined to tell the world all about it.

Naturally, he’s also the one who first recognizes the creepy symbol when he sees a picture of it on TV during a news report about what turns out to be a pair of high profile kidnappings. I won’t spoil it for you and reveal where the symbol actually comes from, but it’s almost guaranteed you’ll be chasing leads down the internet rabbit hole soon after you’ve finished reading.

At this point, it’s nearly impossible to predict where the story might be going, but it’s off to a rock solid start and truly feels like the possibilities could be endless. There’s a winning formula here, with the makings of a potentially great ensemble cast of different types all shoved together to pursue a common purpose.

If I had to quibble, I might say that some of the art is a bit predictable, especially in terms of style and colorist Lauren Affe’s somewhat constrained, generally subdued palette. Overall, things feel a little too safe, like a boilerplate storyboard for a TV series. In that sense, the camera angles and compositions are great. David’s scene with the French fry, for example, as he expounds about the CIA’s legendary MK-Ultra program, is pretty damn close to genius. At the same time, however, it often feels like there’s a slight disconnect between the book’s darker themes and its largely realistic visual style. Of course, I could be totally wrong. There’s also a case to be made that the relatively innocuous style simultaneously makes the underlying mystery and creepiness even more intense – like this could happen anywhere – while also setting the stage for a more intense, colorful, otherworldly art style to come. As I said at the outset, Juan Doe’s cover invokes a certain set of expectations. It could simply be that the creators are playing the long game, and we will get there in time.

Final Verdict: 8.8 “Descendent” #1 is an exceptionally efficient, well constructed debut that adeptly positions the series for a run that could be special. The elements are all there, the plot is in high gear, hang on, this is gonna be fun.