Many of us, from a young age, have been encourage to find out what our true calling is – to follow your dreams, embrace your destiny. Well, what if that destiny was to be a thief? 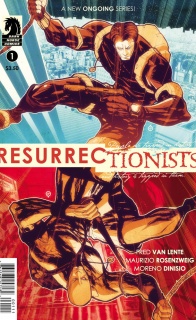 Are you near-death experienced? Framed architect-turned-thief Jericho Way has discovered he’s a Resurrectionist, one of a select group of people who can not only remember their past lives, but become them. Two groups are now after his services—the Sojourn corporation, which wants to exploit his powers for mysterious purposes, and a motley crew of modern-day tomb robbers who have been trying to pull the same impossible heist for 3,000 years—and if Jericho joins them, he may steal back his own future!

There is a certain poetry to tales of past lives that no other concept can really match. Even when the tropes are predictable – the “lost lovers reconnecting” or the “avenging my father’s death over and over again” – there is something about the idea of embracing a long dormant part of yourself that makes for compelling storytelling. However, the downside of basing a story around a concept that is so familiar is that it takes a lot to differentiate itself from the huge catalog of similar stories. That is where “The Resurrectionists” begins – with Van Lente and Rosenzweig attempting to tell a story that doesn’t feel like a retread of something else. In the broad strokes, they succeed.

However, there are a few decisions here that place the book squarely in ‘seen this before’ territory – the chief of which is by playing up the Ancient Egyptian angle. Egypt has become somewhat of a lazy stand-in for all ancient people, due to its iconography and basic details being so well known, and I can think of countless attempts to ‘enhance’ a story by letting the Egyptian setting do all of the hard work. Thankfully, Van Lente and Rosezweig don’t do this, and find a way to make the story feel fresh and unique.

The book is about people, living today, who not only can remember their past lives, but are forced to re-live aspects of it over, and over again. We see, in the opening, Lena, also called the Scout, one of these reincarnated folks who has ‘unlocked’ their past lives, who is able to cal upon her various past lives to aide her in battle. This has hints of “Five Ghosts” to it, and was a fun take on the past lives theme. Later in the issue, we meet Jericho, someone who has yet to unlock their past lives, although he is already living it, to a certain extent. The issue, more or less, is about Jericho’s unlocking his past, and realizing that he is living in some sort of loop of repeated behavior.

The solicit actually tells us far more about the overarching plot of the book than the first issue does, which is fine, but also clouds the reading experience. I had seen the solicit when it was first released, and kept waiting for certain plot points to pop up that just didn’t show. The first issue spends a lot of time detailing Jericho’s experiences in Egypt, where he was a tomb builder of great repute named Tao. Tao/Jericho is presented as a good man who gets caught up in bad situations, and who does what he must to survive. Tao, more than Jericho, seems to be bound by higher aspirations, but both men are skilled at their chosen craft (tomb building versus larceny), and both seem clearly in love.

It is the love angle that works the best in this issue, as Tao’s love for the pregnant Maya is the emotional center of this issue. Throughout, you are supposed to be thinking that the spoken of, but never seen, Adele is the modern day Maya, as Jericho is the modern day Tao. This allows the reader to start playing a matching game throughout, trying to figure out who that we’ve seen in each time period has a counterpart.

The real star of this book is Moreno DiNisio, the inker/colorist. He takes Rosenzweig’s nuanced pencils and brings them to life in a way that is absolutely stunning. The first page is a near pin-up of Jericho, with various past lives around him, and DiNisio’s toning and texturing makes the image pop. He hits the right hues for every scene, from the blue of the heist scenes, to the sand tones of Egypt. Rosenzweig himself does some exceptional work here as well, adding a layer of subtlety to a story that could have easily gone bombastic from the start.

I have two big hopes for the book: the first is that the time periods will be diverse and well-used, and not just focusing on Egypt. I know that is the origin point of the story, and therefore an important part of the book, but look at that opening page again – tell me you’re not dying to find out who the magician is, or the Indiana Jones analogue in the corner?

The other hope is that we get an opportunity to know the modern day characters in ways that aren’t just retreading their past lives. The last page reveal, which shows how wrong Jericho has been about his own detective work into his own past, was the most interesting character beat of the issue. Sure, they are reliving their lives to an extent, but I know more about what their lives today look like, I’ll care more about their past.

Final Verdict: 7.3 – A fine debut, but there is still some work to be done.