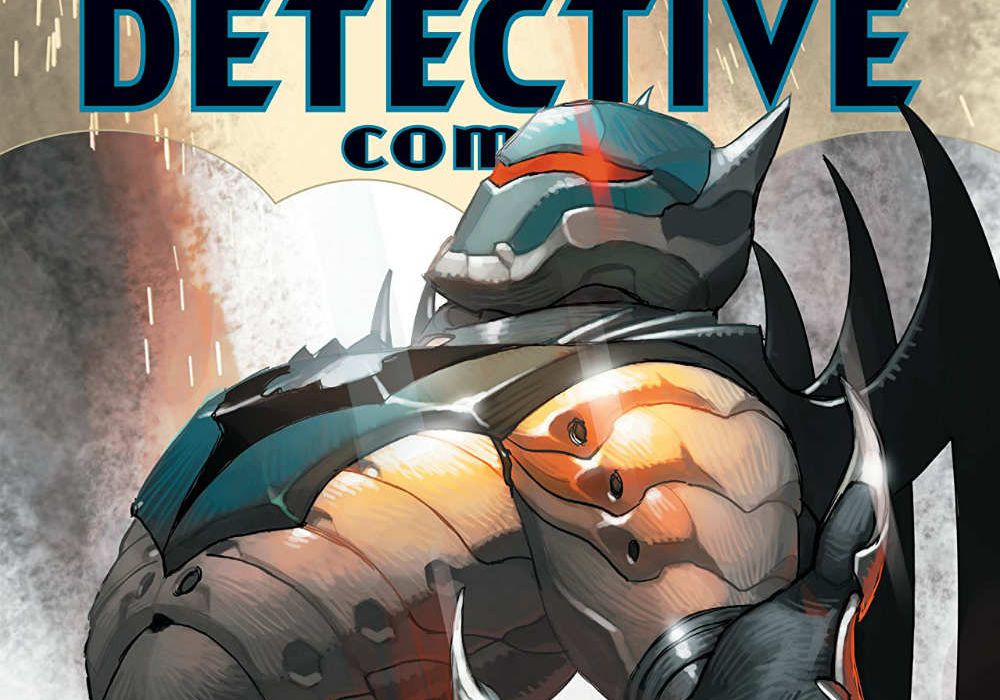 ‘Intelligence’ come to a conclusion with comic book flair. On one level it’s a angel-demon-child fighting demon Batman inside a man’s head, on the other it all happens inside a mechanized Bat suit. 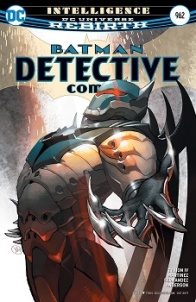 Cover by Yasmine Putri
Written by James Tynion IV
Illustrated by Alvaro Martinez
Inked by Raul Fernandez
Colored by Brad Anderson
Lettered by Sal Cipriano
“INTELLIGENCE” finale! Ascalon, the deadly artificial intelligence created by the Order of St. Dumas, is ready to replace Azrael and purify Gotham City…and all that stands in the way of the world’s most flawless computer brain is the mind of Batman himself!

The Gnosis Sphere has turned out to be a rather nice macguffin for ‘Intelligence.’ While the arcs plot setup is a bit flimsy. Zatana just happens to be in town, Ascalon just happens to attack the Iceberg Lounge, but at the center driving all of this is that sphere. It isn’t a classic Hitchcockian macguffin but it ties everything together thematically as the personification of knowledge. The sphere is like a supped up Antikythera mechanism, an ancient Greek analog computer used to mark time and astrological movements. These ancient automata and other early modern examples like the ones at the Palace of Versaille were experiments in the quest for knowledge that would allow them to eventually master the world. That aspect is what the Gnosis Sphere embodies and what everyone in this arc is looking for. Just maybe in the wrong place.

Tynion has endeavored to explore the figure of Batman by reflecting him through his extended family. This latest facet of exploration isn’t fully revealed until the end, and isn’t all that revelatory; however it should provide some interesting discourse with other Batman centric stories coming soon. What Batman’s desire for the Gnosis Sphere reveals about him is more readily intriguing. The character, charitably referred to as the one willing to do “anything” to complete the mission, wants to use dangerous magic to find the answer to the question of Tim Drake. It’s a new level of delusional, dangerous, self-belief. As ‘Metal’ approaches, this is an interesting prologue to a story of Batman hunting down a mystery he doesn’t really want to solve.

In contrast to Batman’s temptation stands Ascalon, with their quest to eradicate contradictory knowledge. The zealot killer robot is a cartoonish vision of an old view of media and ideology known as the hypodermic needle model. The model assumed that the dominant, intended, message was always received and internalized. While contradictory information was discarded. It was a very robotic view of human potential and the power media. Ascalon is just a bot programmed to replicate its ideology, it has no sense of self beyond St. Dumas. It has no inner self, the desire for greater understanding is antithetical.

Stuck in between them is Jean Paul Valley, surrealistically-literally in Alvaro Martinez art as Ascalon and the personification of Batman battle over his soul/consciousness. This arc has made me surprisingly interested in him. I’m not going to rush out and by the “Sword of Azrael” anytime soon, but for a character that is derided for representing 90’s comic book failures Tynion has replaced that cartoonish projection with something more human. Tynion manages this in typical Rebirth fashion, by recognizing the history of a character.

In contrast to his brother, Valley represents a more contemporary view on the ways in which ideology influence individuals. This is personified in peak comic book fashion with the surrealistic imagery of Valley being pulled between an adorable, if demonic, child and equally freighting Batman. His inner self is eternally contested ground. At his core, he is the blade the Order of St. Dumas made, but that is also tempered with all the knowledge and experiences he has had since breaking free of their conditioning. His refrain about being “the weapon St. Dumas built” has a certain Unforgiven fatalism to it. However, in typical “Detective” fashion such cynicism is treated as a moment of recognition and the chance to do better and be more. The quest for knowledge in ‘Intelligence’ in the end isn’t centered around finding external sources, but in understanding of the self.

It’s nice to still be surprised by the quality of the art in this book. In previous issues Alvaro Martinez’s layouts for his spreads had been big, but cleanly segmented by panels. Martinez clean layouts lead to splashes being very orderly: the basketball spread that opened this arc in issue #958 was four mini sequences made into one larger whole. In this big ole fight of a finale, Martinez develops dynamic pages of action that freely flow across the overall image. Clayface’s introductory spread as he battles Ascalon is meant to be read in a ‘Z’ like motion with Martinez building the overall page around the strength of Clayface charging at the reader/Ascalon. Single pages get similar treatment of being anchored around one strong image with multiple little panels emphasizing action. While nothing about Martinez or inker Raul Fernandez style would be considered manga-like the angular and dense paneling around the fighting sequences is reminiscent of that style. With the the density of images pages are still readable, with a bit higher chance of being read slightly out of order.

“Detective Comics” is a really good comic. The return of Alvaro Martinez, Raul Fernandez, and Brad Anderson reminds everyone “Detective Comics” is one of the smoothest and splashiest art books in cape comicdom. The designation is a reminder “Detective” has something of an expected role to play, while still putting forth its own bespoke product.

As a little coda to ‘Intelligence’ Ra’s al Ghul appears to congratulate Jean Paul Valley the Elder and offers him a seat at the table. Dose this new mysterious cabal have something to do with those immortal mystics from “Dark Days”, the ongoing ‘Rebrith’ shenanigans, or is this something else entirely? Time will tell, but its inclusion gives the appearance of #itsallconnected. Batman finally gets to learn the fate of Timothy Jackson Drake, which “Detective” will beginning exploring in September. These little moments help build out meta narratives but importantly do not feel burdensome. The overall plot of ‘Intelligence’ maybe predicated on happenstance and it is referencing other events, but this is handled in the way life is unpredictable and all there is connecting it are people trying to grow, change, and be their best selves.

Final Verdict: 8.25 – This book has been one of the most consistent reads for a cape book in recent memory. It doesn’t exist within a vague continuity that tries to silo itself from the larger meta narratives but lean into and wonder how would its cast react.