‘A Lonely Place of Living’ comes to its conclusion as the present meets the future. Where will what Tim Drake’s lessons leave him in the end? Let’s find out. Be warned for some spoilers in regards to the whole story arc. 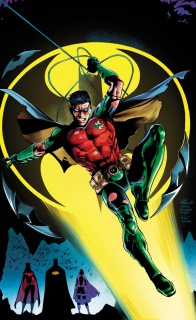 “A LONELY PLACE OF LIVING” finale! Tim Drake is back on Earth — but if the deadly threat he brought back with him from outside of time has its way, it won’t be for long…and this shadowy figure wants to take one of Batman’s team down with him, too! Everything Tim died for the first time is at risk, if he can’t survive this attack!

After being absent for a good chunk of the Rebirth run, Tim Drake made a return as a prisoner of the mysterious Mr. Oz now escaped with a fellow prisoner, his own future self, a Tim Drake that became Batman. What followed was a tale meant to get to the core of Tim as a character and serve as a rehabilitation after years of mediocre stories and general mismanagement. With this issue, ‘A Lonely Place of Living’ comes to an end. So the question is, does Multiversity Comics’s Tim-Drake-Liker like this story Tynion, Martinez, et. al have cultivated?

After two really good first parts (alongside a third part that was good but with some rickets in it), the story hits the landing for the most part. While the second half brought a bit more “event-y” feel into it by expanding the cast beyond the two Tims, Tynion never lost sight of the core of this story: the examination of Tim Drake’s character. For the last few years, Tim’s kind of suffered from that Middle Child syndrome, with Dick, Jason and Damian having more clear, dynamic personalities. But within this story, Tynion does get Tim’s strengths and weaknesses: namely his intelligence and a one-track mind that can cause self-isolation. The one who could become the most like Bruce.

Yet, Tynion rejects the idea by the story’s end. Tim doesn’t have to be lonely to be a hero. He knows the pain that comes along with being a superhero. But the people around him, and the support system he helped build for Gotham can make a difference. It works well in contrast to Future Tim (a.k.a. Titans of Tomorrow Tim), who has been sapped of all the (possibly naive?) optimism his past self has, having lost so much; family, friends (by the by: if that stuff with Conner goes nowhere, I’m retroactively giving this arc a zero), his dreams and ambitions and the desperation to change it. It makes for a sad scene at the end when Future Tim is pulled back, unable to change anything.

If there is anything that I could critique, plot-wise, is that, as I mentioned when discussing the whole arc, the back half was a bit top heavy. I get that the book is team-based but when Bruce, Dick, Jason & Damian are flying old fighter jets to shoot missiles at the Belfry to try and stop Future Tim, this kind of stops being a low-key character examination? It is the definition of having the conventions of the superhero book mess with the emotional resonance of the book. If I could make a suggestion, something the could’ve been a lot more low key and human? Have Tim take his domino mask off. Future Tim did this but Present Tim never did and actually seeing his eyes when trying to have these moments, letting the superhero slip away, would’ve had deeper impact.

Artistically, the book continues to be real good. We’ve discussed before that Alvaro Martinez has been one of the breakout artists of DC Rebirth and he continues to work excellently with inker Raul Fernandez. Tomeu Moray tags in for colors this time around and, while his colors aren’t as bold as Brad Anderson, still does a good job. The stand out moments of the comic are the moments when the timeline is trying to reassert itself and pull Future Tim back to where he belongs. Whereas the majority of the art is the regular style Martinez and Fernandez have implemented, the time distortion effects cause Future Tim to become more ethereal and distorted. It’s actually reminiscent of the more painting-like qualities Eddy Barrows & Adriano Lucas have implemented on their “Detective Comics” issues, but without Barrows’s terrible facial expressions.

Another moment of note is the small scene at the beginning, checking in with Ulysses Armstrong, who is still tinkering away with one of Tim’s spare Red Robin suits. Ulysses . . . is not in a good way. I mean, he wasn’t to begin with, the little terror, but he is getting a lot more erratic and sadistic and the art is selling it well. Disheveled, wide-eyed and the crimson light reflecting off him as Brother Eye asserts control of the systems in the suit all communicating and foreshadowing the moment this kid finally explodes.

“A Lonely Place of Living” shows that James Tynion has a load of love for Tim Drake and — while we do have some disagreements in places — gets the character. I wished some things could’ve been different and it didn’t get so action packed towards the end, but for what it is, and for the various plots it has started, it has been a standout arc in “Detective Comics”. DC Rebirth is heading into Year Three soon and this book may end up being one of the most critical in the coming days.

Final Verdict: 7.5- A good ending to a good arc that sacrificed a bit of the quiet character moments for the bombastic.