“Detective Comics” as we know it winding down as DC has already announced an upcoming creative team to replace writer James Tynion IV and the rotating artists on the title, including Javier Fernandez. With the latest developments and the impending sense of finality the run currently has, will Tynion be able to watch over each issue of the series and make sure the run strikes a cohesive and devastating finish? 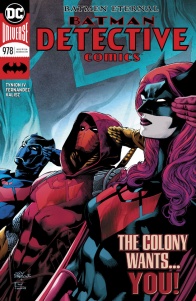 “Batmen Eternal” part three! Congratulations, Batwoman—you have an entire army at your command. So how are you going to use it?

I love it when a good plan starts to come together. James Tynion’s tenure on “Detective Comics” has felt so meticulously plotted and the writer has an immensely strong handle on the book. Storylines from half-a-dozen issues ago still matter and are organically weaving into each other in the latest arc, ‘Batmen Eternal.’ In fact, “Detective Comics” is still one of the rare series in DC’s Rebirth that still feels like it is singularly divided into chunks of stories. It can be hard to find the books in line which are serialized in such a nature where characters like Batman and Tim Drake are still trying to fix their relationship that was damaged several issues ago and readers are also getting the huge fallout from the conclusion of the last story in a bombastic, satisfying manner.

Going back to the beginning of Rebirth, you can draw a straight line of linear progression and see that Tynion has a plan for the nature of the book. Now, readers are past some the buildup from previous arcs and Tynion gets the chance to wow fans with his new interpretation of familiar concepts and the conclusion he draws with characters like Brother Eye and The Colony. For a series containing so many characters with a similar demeanor and personality, “Detective Comics” #978 gets the nuance of each Bat Family member and depicts them all in a different light. Too often in a title featuring an ensemble does each member of the cast start to blur into each other evokeing a feeling of redundancy and that this superhero comic only matters on a surface-level read.

Artist Javi Fernandez joins some of the best artists in DC’s Rebirth initiative that have all contributed to this book. Despite having a more fluid and positive style, Fernandez proves he is a malleable artist capable of letting some of the darkness presents within “Detective Comics” into his enormous talent. The last few pages, in particular, show Fernandez drawing something horrifying and dare I say it; twisted. Plus, his layouts are ambitious and the action sequences are easy to follow. The addition of the symbols and imagery present throughout the work also do a wonderful job of teasing some of the aspects of the book which readers can expect to see at the tail end of the story.

So many of the twists in some of the Batman line feel stagnant and unchanging, which is where “Detective Comics” comes into play. The new dynamics between the different characters and villains seeded issues ago that start to make themselves known here comes out to be absolutely thrilling. Tynion asks a lot of strange questions in the story and throughout the series as a whole and answers them in different ways that readers would expect if this issue is any indication of events to come.

With only three installments left, Tynion’s role on the book is heading towards an endgame. The idea that his work on the comic is ending so soon feels particularly tragic as the writer still has so many threads dangling across the Batman Universe spanning all the way back to his “Batman Eternal” days. Because of the vast, groundbreaking character work done for the cast of the ensemble, I hope the writer will break the mold when he leaves the title and decide ultimately to not to put the pieces back together towards the status quo and undo the creative, long-gestating ideas finally about to hit an unbelievable peak of quality.

“Detective Comics” #978 hits a dark, dramatic tone worthy of an endgame and has so many fascinating ideas and things to say about the entire family along the way. With writers often struggling to make the extended Batman family different, I hope they will begin to study this run going forward. While it is difficult for me to imagine the overall series coming to a satisfying conclusion in just a few more issues, I’m still happy to be along for the ride for one of the strongest runs of Rebirth that continues to exude an impressive peak of quality. Fernandez’s artwork melds his pleasant approach to the page with the inherent creepiness felt within the work.

Final Verdict: 8.5 – All the dominoes are falling into place in the pages of “Detective Comics” #978.