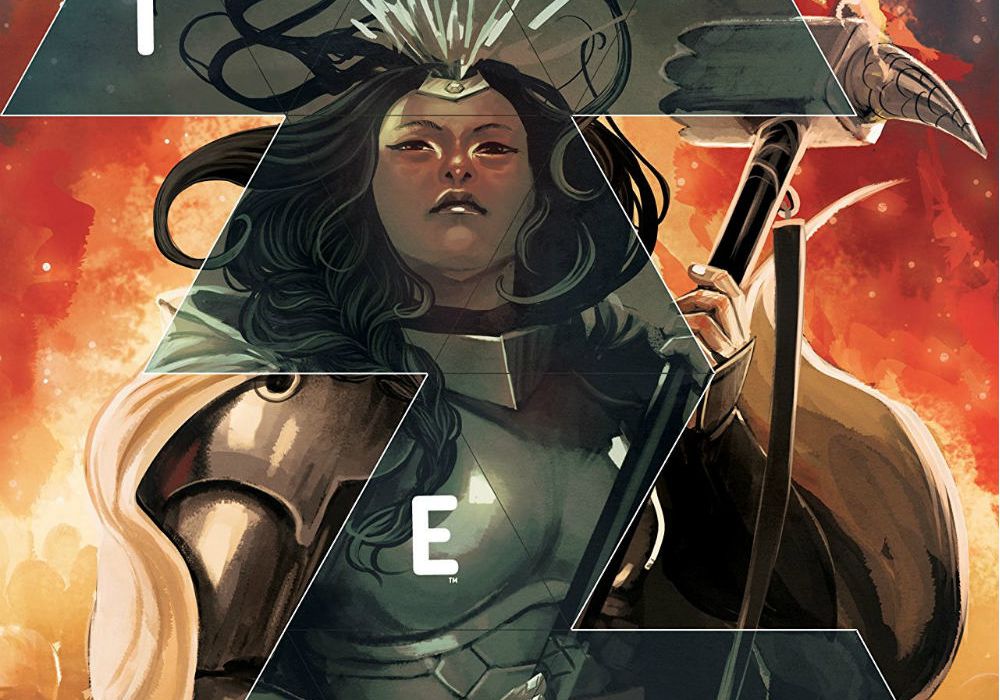 “Die,” it was never going to be Okay.

Before we get into the meat of this review, note that everything below the credits and solicitation text comes with a MASSIVE ALL ENCOMPASSING SPOILER WARNING! “Die” #5 goes places that need to be considered clearly without veiled hints. If you are looking at this review for purchasing information, I whole heartedly endorse reading this issue and series. “Die” continues to be one of the most consistent and artistically sumptuous books on the shelves. 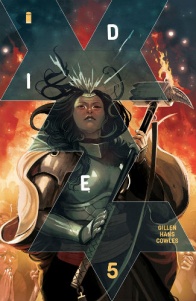 Since the release of Glass, I’ve been considering what constitutes an effective twist, and why some of these moments in M. Night Shyamalan’s filmography work so well and others do not. An effective twist isn’t a massive swerve that just topples everything audiences previously understood, but reveals a deeper layer to the work. The “Die” creative team of Kieron Gillen and Stephanie Hans manage such a moment in “Die” #5, the conclusion to the series opening arc ‘Fantasy Heartbreakers,’ by revealing what kind of game Die – the forthcoming RPG – is and how that informs the real dramatic engine for “Die.”

At the start of “Die,” the game it was playing appeared fairly straightforward. Our party of adventurers had been pulled back into the game by the friend they left behind, and that friend had become the antagonistic Grandmaster. They would march through a parade of teenage horrors on a quest to defeat the Grandmaster, or make him see reason, and go home. But what happens when the Grandmaster is defeated in issue #5? What deeper layer is revealed by shattering the basic setup, the book and the Grandmaster, had laid before the audience. “Die” isn’t a series, or a at heart philosophically as a game, about defeating a Dark Lord; it’s about building consensus. With the Grandmaster simultaneously violently and lovingly pushed aside the dramatic engine of the series becomes “Can these people come to an agreement?” as Gillen noted in the back matter.

That is a much harder and more interesting dramatic question to bend the series around as the horrified and shocked faces Ash finds on her party after using the Death Touch ability on Sol. That panel of shock runs counter to the traditional ideas of melodramatic framing, it isn’t a big tight close up. The panel is the smallest one on the page, Isabelle isn’t even in it entirely. Yet with the canted angle perspective and angular paneling it creates the right amount of visual uneasiness to match and enhance the shocked expressions in the parties face. The feeling of a wedge being driven between the party is literalized in that three panel sequence, and further cemented by Hans pulling out in subsequent panels that deny the reader the closeness as they hold hands and wish to end the game.

Which makes the eventual disillusion of the party all the more understandable. Everyone breaks the way you would expect. Chuck is foolishly chaotic evil, valuing pull ups and unseen riches in reality over the party. Isabelle, the character who didn’t want to play the game is now very committed to it. And she has a point, they did just create a humanitarian disaster. Matt and Angela are parents. Dominic/Ash is the sin eater of the group, they made a promise and fulfilled it no matter what.

At first I was hoping the series would potentially skip around the party and each of them explored via internal monologue. After Ash’s actions, sticking with her and using that to reveal her own conflicting and contradictory thinking as both a person, and the nominal leader of the party, is far more effective. The dissonance within the character created by Gillen, letter Clayton Cowles, along with Hans is indicative of her inability to dictate “the” or “a” narrative and the overall destabilized narrative within the series itself. After what she did, her fear of self in this environment is understandable. Ash the Dictator is a monstress woman.

Stephanie Hans’s art is consistently phenomenal, with the way she blends various shades of red with yellow-orange in the background to make this impressionist raging fiery mess that is Glass Town. All the painterly application of color makes backgrounds pop even if they aren’t always the most distinct. Which allows moments like the Death Touch with its black gutters, all black everything really, to stand out and have the feeling of eternity in a single second as Ash violently, and lovingly, plunges a flaming hand into Sol’s chest. I’m unsure what kind of “loving” is applicable in this moment. Sol’s declaration that this was all for her and other moments in the past can easily be read with a romantic subtext. At the same time the moment is framed in that melodramatic anime killing your best friend kind of way. Nevertheless it was shocking and emotionally effective due to Hans use of color and framing.

Hans use of color also helps to enhance the revelation of what becomes of Sol. Sol is dead. Sol has fallen. Sol is Fallen. The revelation about the Fallen, and a previously unspoken rule of the game, is your typical “Die” punch to the gut. The artistic reaction to this is to seemingly suck all the color out of everything. It isn’t quite monochrome, but the grey mass with purple accents that define Sol stands as the antithesis of the normally vibrant pallet in “Die.”

The funny thing about this issue, if Gillen and Hans had wanted to go the Avatar route, a standard story over highly aestheticized surface, there is no doubt it would be a fun, totally fine, comic. Because we get to see that way of being in the first half of the issue as the party executes the plan in a series of two page scenes. This overall sequence is probably the best art Hans has done on a purely functional and page design level. Her pages can be a bit on the big and limited at times acting more as excellent moodscapes than a standard idea of sequential art, but here everything fits together like a puzzle that slowly builds until Chuck does something foolish. In particular her use of vertical and height based imagery and layouts to emphasize the sneaky quality of the Neo and Ash and Matt’s adventures below Glass Town are just plainly good functional craftmanship.

“Die” concludes the opening arc in a hail of fire and emotional gut punches that setup the series for the long game.

Final Verdict: 9.0 – “Die” is one of the most artistically and narratively engaging books currently being published.