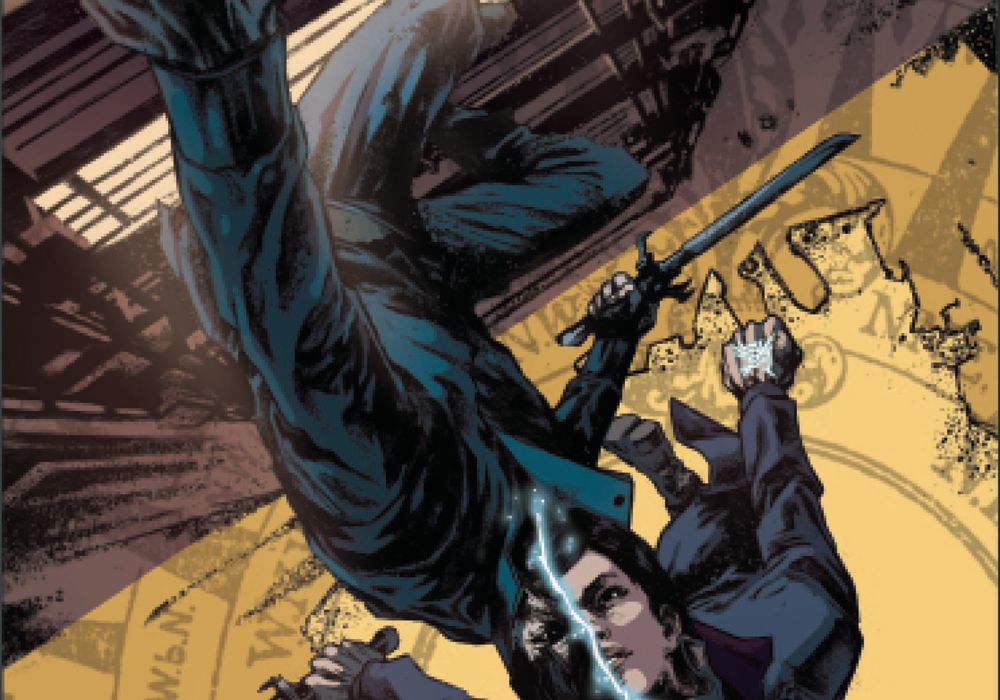 Though perhaps reliant upon readers’ familiarity with the Dishonored franchise, ‘The Peeress and the Price Part One’ is a well-written, well-drawn, well-colored story that fits well into the world of the games. 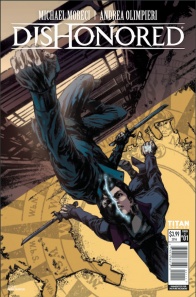 Set in the world of the smash-hit videogame Dishonored! Set after Dishonored 2, our story sees Emily Kaldwin return to Dunwall from an adventure with Corvano Attano! Emily comes into conflict with a politician named Archibald Dufrane, and there is a mysterious killer on the loose. But when Emily’s powers start to falter in the middle of their investigation, things start to deadly…

When it comes to the characters of the Dishonored franchise, Michael Moreci is very good at keeping their voices distinct and true to how players may remember them from the video games. Corvo Attano is the voice of a more militant or otherwise vigilante action, whereas his daughter, Empress Emily Kaldwin, is more collected, beholden both to the self-defense training of her father and to the politicking of her mother Jessamine.

There is an inherent danger to using Corvo and Emily after the story of Dishonored 2, in particular with respect to who has the Outsider’s Mark, and thus the magical powers of the Void. However, while choosing Emily does remove the canonicity of players who chose to play the game as Corvo, keeping the Royal Protector and Spymaster to natural skills enables Moreci to show that Corvo is far more than his powers, and there is even in-story mention of how he does just fine without the Mark. Furthermore, in taking the narration’s perspective of Emily in her dual role as leader of the Empire of the Isles and supernaturally empowered vigilante protector of her city, Moreci helps readers to look at three sides of the story of ‘The Peeress and the Price.’

While the factions involved in the story are relatively common, from the gangs to the mystical elements to the political intrigue, Moreci manages to inject a slice of new plotting.

First, Moreci changes the relationship between the political opponent and the supernatural one. Archibald Wainwright (incorrectly identified as Archibald Dufrane in the solicitation) is far from previous public leaders such as Hiram Burrows or Luca Abele in more ways than one. For example, unlike many other political enemies in the franchise, Moreci presents him as a troublesome, yet possibly sincere advocate for the lower classes in desiring a turn toward democracy rather than the unpredictable, dangerous nature of the Empire’s monarchical system that had been the subject of a coup d’état twice in fifteen years, to increasingly disastrous results, and even seems to be against fully chaotic anarchy.

Second, Moreci develops a new kind of opponent in the nameless rat gang of Luella Price. Whereas other gangs seemed to either have no supernatural elements at all or be entirely reliant upon them to the point of being defined more as cultists or mystical assassins, the rat gang seems to be a more grounded, street-level threat that just happens to use mystical items such as bonecharms very competently. By using a chaos-oriented gang that uses mystical items less as tools and more as weapons in their own right, Moreci manages to further evolve the world of Dishonored and expand the possibilities of an interrelation between magic and technology.

The use of both Corvo and Emily together allows for storytelling that had been kept out of most of the fiction; the father-daughter team that had been teased in promotional information to the second game. In both the day-to-day politics and the nightly vigilantism, Moreci manages to satisfy with his use of both of their personalities balanced against one another; not quite master and apprentice, but two partners working toward a common goal.

Although Michael Moreci’s writing on “Dishonored: The Peeress and the Price, Part One” is decidedly skewed in favor of those who are fans of the video game franchise, such a tie-in would likely most appeal to those players and fans more in the first place, and so is not necessarily a downside.

Much like his work on the previous volume of “Dishonored” comics, ‘The Wyrmwood Deceit,’ Andrea Olimpieri’s artwork fits perfectly into the style of the franchise. Olimpieri’s style harkens to some of the paintings in the games from Anton Sokolov or the tutorial images. The deep shadows present an impression of a downtrodden society. Shadows are deep, faces relatively roughly pictured, especially potent in the massacre scene by the nameless rat gang that looks like a kind of grotesque gallery of angels with the light shining down on the corpses. In all, Olimpieri gives the impression that no matter how much Corvo and Emily seem to have changed things, the world of Dishonored is still going to be a nasty place.

Mattia Iacono’s coloring helps with both a changing tone and an acknowledgement of the supernatural. In scenes of calm, there is a filter of blue over the entirety of a scene. For times of extreme violence, of bloody horrors, red fills readers’ view. For use of supernatural elements, like bonecharms or the classic “Dark Vision” power, there are similar colorations to how a player would see them, with a dark blue shade over the whole world, with exception of yellow highlighting points of importance, especially people and the aforementioned magical charms. Similar to Olimpieri, Iacono’s colors help to engross the audience in the trials and tribulations of a Marked person in the city of Dunwall, not to mention those of the powerless masses.

Magic and mayhem, politics and predators, the combined work of the entire team on this first installment of this “Dishonored” comic two-parter seems to definitely be on the right track, though perhaps best read by those who already know what is going on to some degree.

Final Verdict: 8.0 – The first part of ‘The Peeress and the Price’ is simple yet well-lain, with the artwork and coloring meshing perfectly with the world’s existing artwork.