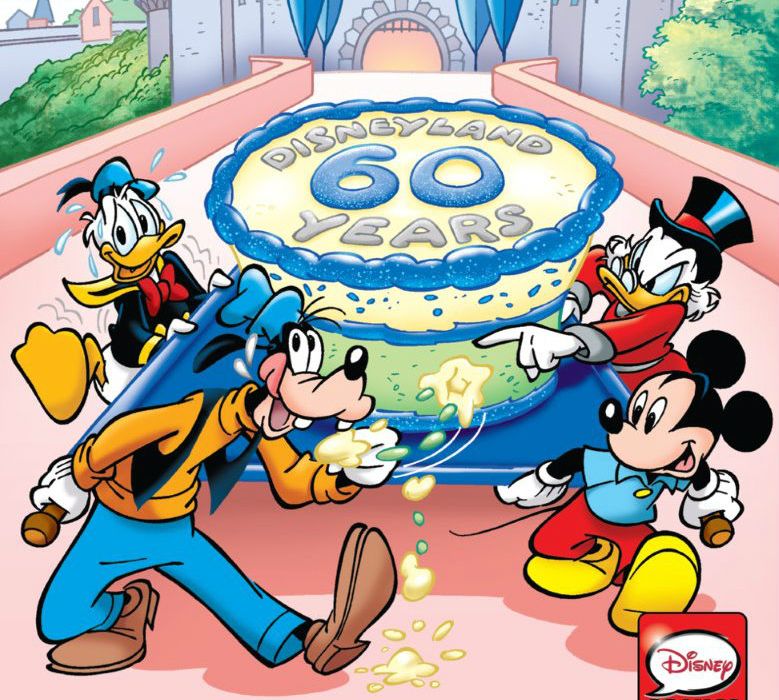 On July 17, 1955, Walt Disney opened the first of his theme park empire in Anaheim, California. True to form, he called it DisneyLand, and its presence has generated a massive multimedia empire. In honor of its 60th anniversary (though on the eve of its 61st birthday), IDW has scoured the Disney comic vaults to assemble “Disney Magic Kingdom Comics,” a two-part collection of stories centered around the park. The biggest reason to pick this up is for the Carl Barks story, but most of the other shorts manage to hold water in their own right. 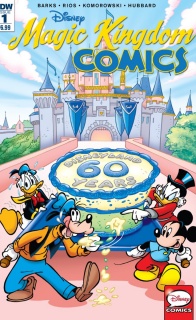 I suppose you could think of “Disney Magic Kingdom Comics” #1 as a more contained version of the park it’s spotlighting. There’s all your favorite characters all in one place, plenty of sights to see, and a certain artificiality running underneath the whole thing. Essentially, the stories in this collection are promotional items. Produced between 1955 and 1992 and appearing in various Disney magazines, they were created to generate interest and spark attention for the park. They might predate the word synergy, but Disney has always been a wall-maintained machine.

The shorts are split into two factions: stories using the rides and features to directly influence their narrative, and those that use the sights of the park to launch into their own adventures. Overall, the IDW Disney comic editors, Sarah Gaydos and David Gerstein have done well in assembling this collection, and I found myself enjoying the majority of these stories.

The major exception is ‘Donald and Mickey in Frontierland.’ Pete Alvarado provides a simple setup, with Mickey and Donald trying to track down three errant Country Bears players. The story lasts eight pages, but feels like a 32-page excursion. The jokes are there, but none of them really land. The compositions and staging feel more like they belong in a comic strip than a comic book, and it reads like we’re being set up for a punchline, but that punchline never comes. Alravado provides a brief scene on a train that has some animated energy, but its mostly bland.

Of course, it doesn’t help that ‘Donald and Mickey in Frontierland’ is sequenced directly after the Carl Barks story.

‘Goofy in Fantasyland’ also actively features the characters exploring the park. Of all the stories, this one feels most like a sustained commercial, with Minnie and Goofy wandering around, delighted by all the rides and attractions. At one point, they get turned around in Snow White’s Adventure, which inevitably leads them to an alternate dimension where everything in DisneyLand is actually real. “Just look,” the original editors and Disney executives seem to say. “DisneyLand is beyond a simple theme park. It’s a place where all these fantasies come to life! Where your imagination runs free.”

For his part, Al Hubbard has a lot of fun with the material. Hubbard originally worked as an in-between animated before jumping into comics, and his work stays on model while retaining an enchanted spirit. He keeps the story in constant motion, maintaining a high level of gesture and expression. This may be a big ole commercial, but Hubbard doesn’t half-ass it.

The other two stories veer off in their own direction, and they’re probably the more successful material. It might be because ‘Red Rogue’s Treasure’ seems just as much a love letter to Carl Barks as a feature for the park. Originally published in the Danish “Anders and & Co” in 1992, the story finds Donald, Daisy, Scrooge, and their nephews reflecting on a recent encounter with marauders after visiting the Pirates of the Caribbean ride. Tightly plotted and animatedly illustrated, the short packs in plenty of hijinks, action, double-crosses, and humor into its 15 pages. Paul Halas and Unn Printz-Påhlson don’t care so much about characters or plot as they do about the gags, which Victor Ríos delivers in spades. Things blow up, characters get pummeled, and events constantly spin on their head. Out of all the stories, this one probably surprised me the most.

Of course, the real reason to pick up this book is for the Carl Barks story. ‘Fantastic River Race’ features a lot of the elements that went into every one of Barks’s stories, matched only by his excellent cartooning. In 20 pages, Barks sets up a situation, raises stake after stake, yet still manages to successfully conclude the whole thing without it feeling rushed or unsatisfactory. The story centers around Scrooge McDuck racing against the Beagle Boys to pick up a stash of gold, but it’s also sort of a treatise on the development of industry? Desperate to have the fastest, most efficient steamboat, Barks has Scrooge and his engineer shuck off wood-powered engines for gas guzzling motors and water shedding propellers. The boat explodes out of the water in a fiery blast. Seriously, some of the boat images are as exciting and thrilling as any high stakes chase today. It also manages to sneak a little note about the cost of progress at the end. ‘Fantastic River Race’ may have been a lark comic, but in the hands of a grandmaster cartoonist, it’s still a formidable achievement.

The best stories in “Disney Magic Kingdom Comics” #1 take the idea of the park and run with it in some new direction. I think these made me want to visit the park moreso than all the shorts that took place directly inside its gates. The Carl Barks story stands heads and shoulders above the other parts of this collection, but on their own, they were mostly solid entries. I haven’t always dug the Disney comics IDW has been putting out, but like with the rest of the series, it’s interesting to see what Sarah Gaydos and David Gerstein are able to find and collect. I wonder what parts of the park we’ll explore next.

Final Verdict: 7.5 – There’s a Carl Barks story, so it’s worth it just for that. But most of the other stories are well done, too.