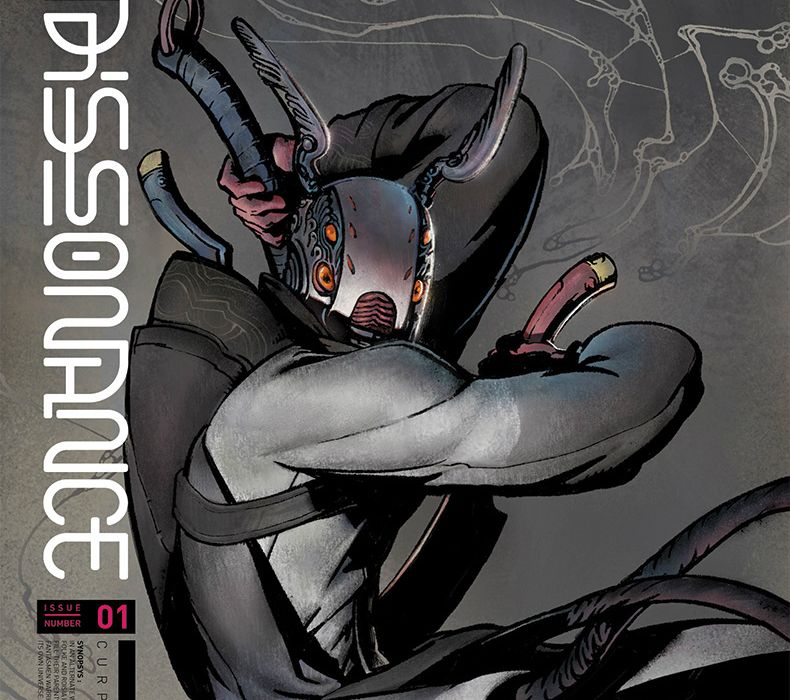 “Dissonance” #1 attracts and appeals you on sheer cover value, which is in part thanks to ‘designer’ Melita Curphy’s stunning creations. It has the look and feel of the next big Image hit, but do the inner contents share the same craftsmanship? Read on and find out! 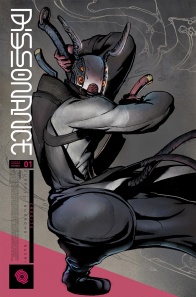 In an alternate world where Earth is populated with powerful human-spirit hybrids called Fantasmen, Folke and Roisia Herviett, two siblings with opposing worldviews, are challenged to prove their worth and take up their parents’ positions in a devious group who secretly run the world. Meanwhile, Seraphim, a Fantasmen warrior guard, is sent to prevent a catastrophic event from affecting the Earth and its own universe. From designer MELITA CURPHY, writer SINGGIH NUGROHO, and featuring the art of SAMI BASRI (Power Girl, WITCHBLADE), comes a fantasy drama set in a sci-fi world unlike any other.

As soon as you enter the world of “Dissonance”, you get the feeling that it’s something huge and intricate, because writers Singgih Nugroho and Ryan Cady hold nothing back in setting the rules for you. The first two pages are a scrolling text-like narrative that tell you about the rules of the world, and in honesty, as interesting as the concept is, they feel clunky. I’m a firm a believer that sequences like this don’t need to have real estate if the world-building can be done throughout the text itself. It’s often an easier way for the reader to digest information rather than having it all thrown at them. However, I will give credit where it’s due: Nugroho and Cady sure have developed and interesting world around this concept.

In “Dissonance”, Earth exists in a pseudo utopia thanks to a race of ghost-like aliens called ‘Fantasmen’. They are non-violent (for the time being) lifeforms that essentially bond to a human to become either a ‘half-synch’ of human with animal parts, or a ‘full-synch’ which is essentially a human with an animal head and other body parts that’s still bipedal. It creates the exact type of racial tension that you can imagine, and the writers spare no time letting you know that this kind of discrimination is fully evident. However, I always find it interesting to see a vision of future Earth that’s not totally ruined or post-apocalyptic, and I think Nugroho and Cady have found something quite interesting, in a utopia that has shades of our own societal flaws even though it’s allegedly enlightened. I think it works because unlike other comics of similar genre, the worldbuilding isn’t solely focused on action or war. The first proper scene we get is a fashion show, showing how humans can pull off the intricate Fantasmen style. Sure, it ends up in an assassination, but it’s quite interesting and often more revealing to see the more pedestrian facets of their society in the narrative.

Nugroho and Cady set up two possibly intertwining narratives in this first issue, which can be a little confusing at times. One, presumably the main narrative, focuses on a brother and sister, which is more political and looks to show how unbonded humans still live in this post-human world. The point that we’re entering this world seems to show how the society, as great and utopian as it is, seems to be teetering and ready to crash at any minute. However, it’s tough to fully grasp while having to understand the rules of the world and have another narrative run underneath as well. The second plotline focuses on the Fantasmen, who are more observatory, and almost work as a police force to protect humans from rogue alien forces. Although it sheds light on the Fantasmen themselves, the plot seems a little less weighty than the main one and feels like it shouldn’t have as much real estate as it does.

To really sell a high-concept sci-fi such as “Dissonance”, you must have some crazy art to drive it, and make no mistake, Sami Basri is a true tour de force here. I’ll credit Melita Curphy’s design work here too, because it is really gorgeous and inventive, but I think it’s Basri’s supple linework and sense of clean aesthetic that makes this comic the visual treat that it is. Although I’m not a fan of the information dump of the first two pages, I can’t deny how Basri’s art really makes up for it. Each panel does perfectly complement the text and does make it easier as you’re immediately visualising each aspect that the writers are presenting, both with setting and aesthetic in bound to help you truly understand the world. You get another great sense of the world about halfway in, when we’re introduced to the Fantasmen plotline. There’s a big splash page of the two Fantasmen walking through a serene, yet well rendered and though-out park scene. In the one page, you get a feel for what keeps the citizens busy, what entertains them, what the flora of this era looks like, the transportation, and the architecture, and still it doesn’t feel overly busy.

What’s interesting to me is how well Sami Basri plays with expression even in a comic that’s about two-thirds alien hybrids. This works especially well considering the political conflict within the main plotline. With Folke Herviett, one half of the sibling protagonist duo, Basri paints him as a coy, brash personality, who wears himself like a sleek and stylish CEO. But what Basri executes subtly as the sequence goes on is a gradual degradation of his confidence as other members of the meeting start to see holes in his plan. At the end of it all, we see Folke for who he really is: a scared kid way in over his head, worried that his actions may end it all at some point. Basri plays with facial worry lines and an expression that displays fear and responsibility to convey this, and it does a lot more for the character work than anything in the immediate storyline. The other players of the political meeting are just as dynamic. As I said, a lot of the more alien types give off a distinct personality. Juthrbog, the mollusc-looking hybrid, comes off as sleazy not just due to his script, but the way that Basri has him creep towards vulnerable women hunched like a slow-moving snail and eyes peering into your very soul.

Sakti Yuwono on colors gives an overall very pretty display that adds to the futuristic aesthetic the series boasts. My favourite scenes displaying coloring occur within the fashion show sequence. Yuwono has the show set against an all-encompassing black that makes everything else in the scene pop, especially making the assassination panel in this sequence almost stylish in execution. A lot of the other scenes are a palette of space greys and clean neon lights, which is fine and never goes out of it’s way to be over the top. I find, however, its when the scene calls a meld between technology and nature, like in the Fantasmen introduction, the colors awaken in a lovely autumn palette that tastefully blends with the greys.

“Dissonance” #1 is a whole lot of world-building all at once, and can be a bit overwhelming in pacing due to this. But there’s a well-thought out and interesting world underneath the crisscrossing story and dense information dumping. Luckily, it’s also rendered beautifully by Basri and Yuwono, who strive to create a beautiful yet somewhat cynical futurist Earth, one that embraces style with bold modernist simplicity. This is a sci-fi to keep an eye on.

Final Score: 7.3 – There’s certainly potential underneath the heavy world-building and storytelling in “Dissonance” #1, but the beauty here really lies in Basri and Yuwono’s visuals.