Fundamental questions of humanity and the fantasmen come to the fore in “Dissonance” #2. 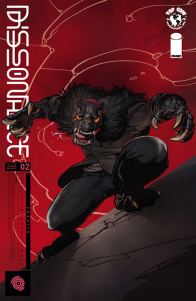 Roisia aggressively tries to confirm her position in the Rex Mundi without knowing that her brother has been keeping a secret about their parents’ past that could change everything. On the other hand, Seraphim begins to question its purpose after realizing what humanity has become.

What is more infectious: human conscience or alien amorality? Singgih Nugroho and Ryan Cady’s focus on the amoral conspiracies inherent in Rex Mundi continues into the second issue of their new series. The concentration on a few set voices helps to parse out the moral and the sane.

Folke Herviett seems to be the central character of the majority of this issue’s narrative. As the sole moral voice in the Rex Mundi, his perspective seems like it would provide a new light on just how disturbing the majority of the government really is since the Conscience Agreement between the Fantasmen and humanity. In a roundabout way, Nugroho and Cady accomplish this overall focus, but perhaps not in the way that they intended.

After the internal monologues provided by his likely sociopathic sister Roisia in last issue, Folke seems to be in the background in terms of relative importance. While Nugroho and Cady do give him a flashback to give some basis behind the secret he reveals, the focus still seems to be almost entirely on Roisia and how she uses amoral, at times even immoral, means such as murder to rise up in the ranks. This is not to say that such a focus is bad. On the contrary, the focus on Roisia Herviett serves to further emphasize Folke’s out-of-touch nature and how he has such a hard time integrating with the new society of emergent, semi-justified sociopathic tendencies. At the same time, Roisia’s moral depravity, even without being shown on-panel this time, goes a long way to develop her as a villainess in her own right, even just by mention of her actions.

Nugroho and Cady use Seraphim to look at the other side of the equation, utilizing him as a foil to Roisia and Folke both, both in terms of an opposite in morals to Roisia and the Rex Mundi, and a reversed perspective in terms of species to Folke. While Folke is appalled by the ways in which half-synch and full-synch fantasmen manipulate the world without any regard for human life whatsoever, on account of the fact that fantasmen spirits will simply return to Terra Fantasme if they die, Seraphim’s perspective as a not-yet-synched fantasman allows him to see the failings of humanity itself. Through this lens, Nugroho and Cady are able to focus in on the fundamental failings of the system that came about with the Conscience Agreement. It seemed to be all-give and no-take on the part of the fantasmen before, which is likely why humans agreed in the first place . . . but was it? Are humans so kind that they can overcome the pure, soulless nature of non-synched fantasmen? Are fantasmen so amoral and violent that the only way to achieve peace is by linking with humanity? It goes without saying that the answers to these questions are complex and difficult to answer, especially in light of how death works for the fantasmen versus for humans, but that kind of moral relativism and the anthropological and sociological implications of the fantasmen are a large part of what makes this story so interesting, with the revelation of a very specific, very dangerous potential dissonance partner all the more riveting for it.

Sam Basri’s artwork is absolutely beautiful. The alien architecture of the city and the fantasmen work in many curves and intricacies, a far cry from the blocky structures more common of the modern day, and working in direct, deliberate contrast to the more typical, structurally recognizable faces of the Hervietts and other humans. Most of the synched are not disgusting, but rather… interesting. A key facet of the artwork is also the use of subtle facial expressions. In particular, the very slight smirk on Roisia’s mouth after a horrific act of hers comes to light helps to bring forward Nugroho and Cady’s writing, and the way that her hair covers her possibly either damaged or missing left eye adds to the danger and mystique of her inhumane nature. The sheer danger and horror of the last pages is all the more intriguing for this alien structure, as it results in the subject on the final pages being monstrous and all the more inhuman.

Adding on to the beautiful artistry is some fantastic coloring by Sunny Gho. From the bright colors of the fantasmen, especially Seraphim’s ethereal form, to the more classic tones of human tans, blacks, and browns helps to showcase the way in which humanity has both integrated and kept themselves separate from their otherworldly visitors/invaders. Of particular note is the sepia-esque filter put over Folke’s flashback, a distinct yet subtle way of showing a different time period aside from the deliberate notation in the top left corner of the pages that begin and end this flashback.

What is human? Is it at all good? Who can tell? We will only know more going forward, as the conspiracy seems to be about to break wide open.

Final Verdict: 8.5– Mixing amoral relativism with the trappings of an “aliens among us” tale, “Dissonance” #2 continues to provide intrigue.