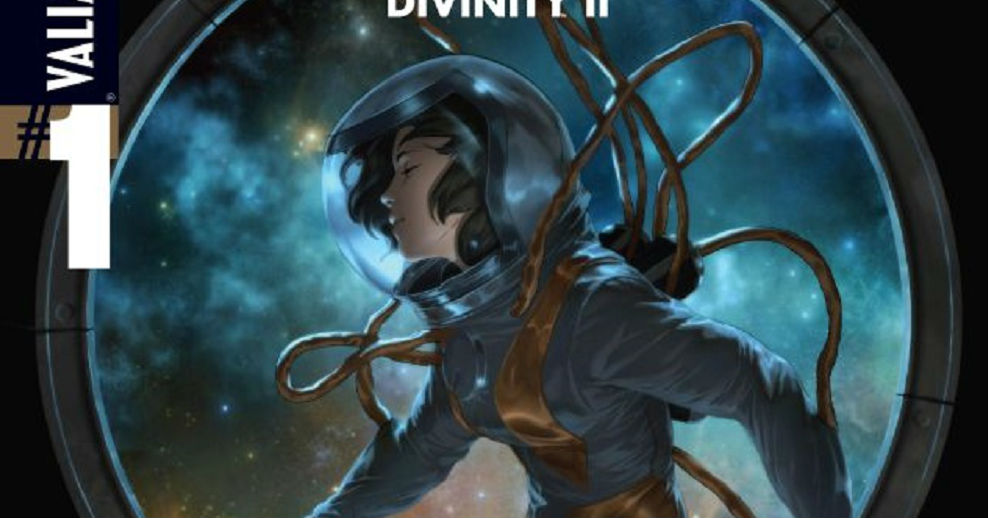 The original “Divinity” was a breakout hit for Valiant Comics last year. Earning near-universal critical and fan acclaim, it was only a matter of time before the story of Abram Adams continued. So how does the start to this sequel fair? Check out in our spoiler-free review. 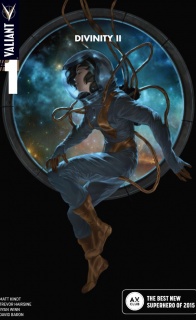 The much-anticipated follow-up to the five-time sold-out series that The Onion/A.V. Club calls the “Best New Superhero of 2015” is here! The acclaimed creative team returns for a perfect new jumping-on point into the expansive sci-fi saga that shook the world!

At the height of the Cold War, the Soviet Union – determined to win the Space Race at any cost – green lit a dangerously advanced mission. They sent three cosmonauts farther than anyone has gone before or since. Handpicked orphans with no connections to Earth, trained as devout Communists, and restricted from having families, they became lost in the stars and encountered something Unknown… Something that changed them.

Long thought lost and erased from the history books, Abram Adams was the first to return. The few that have been able to reach him believe him to be a deity. They say he can bend matter, space, and even time to his will. But, even with limitless powers, he is concerned only with the secret love he hid away from his superiors and the unborn child he never met.

Now, Miska, the female co-pilot of the group, has also returned to Earth…but, unlike Abram she had no secret family. Unlike Abram, she still believes in the Communist ideal. And, unlike Abram, she intends to play a very real role in the return of Soviet glory.

Earth is about to meet a new god. And she’s a Communist. How long can it be before the nations of Earth bend before DIVINITY?

You know how some reviewers will address numbered sequel titles in some playfully facetious ways? Like “Something Something 2: Electric Boogaloo”? Well, I was going to do that like a horrid human being and the first one was going to be “Divinity II: The Space Communists Strike Back”. What I didn’t realize at the time was how kind of really appropriate that was.

Instead of returning to Abram, we instead focus on one of the other two members of the party he traveled the stars with, Valentina Volkov. She lived on the street before she was taken in and raised as the daughter of one of the scientists part of the project. As such, her dedication to the mission and the Motherland is more firm than even Abram. It’s to a very dangerous degree, as she shows several times through the issue.

The motif of rats is something new to this series. Valentina’s nickname given to her by her foster parents is “myshka” meaning “little mouse” (a term of endearment from her mother, a term of experimentation from her father”). It’s no coincidence that the first scene we see of little Valentina is of her trying to eat a rat (portrayed in a lovingly gritty way by Hairsine, inker Ryan Winn and colorist David Baron) and it is brought up again in regards to the experimental nature of the mission and Valentina’s willingness to expose herself to whatever made Abram into Divinity. To go even further, this can also be used to talk about the experimental nature of “Divinity” as a concept, since it really is the first real big character introduced in the Valiant universe that was not part of the original 90s universe.

Hairsine, Winn and Baron are absolutely fantastic on this book. The storyline in this issue puts superheroics to the side but it allows the art team to really juxtapose the grounded and harsh realities of the Soviet regime and living in poverty with the psychedelic and imaginative landscape of “The Unknown” place these cosmonauts traveled to without either side feeling left in the dust. One particular scene of Pure Creepy (aside from the aforementioned rat eating) was the face forming from an alien flower and begin to speak. It is so delicately etched into the plant that it’s just on this side of disturbing as opposed to comical.

Ryan Winn’s inking of Hairsine has always, to me, give a kind of “hollowing” effect. I mean this in a good way, considering the post-humanity/inhumanity of the protagonist. It always emphasizes the bone structure of people, age lines and such. It even translates well to the more cosmic side of the series with this eldritch involvement of thin fauna and almost spindly wildlife.

David Baron’s colorwork on this book continues that wonderful juxtaposition of the grounded and the fantastic. In the “Behind the Scenes” backmatter, Kindt describes Baron’s colorwork on the cosmic as “glowing” and that I can certainly agree with. The purples, light blues and magentas of “the unknown” radiate a saturation. It’s to a degree where Kazmir (the third cosmonaut. It doesn’t end well for him) vomit from exposure is glowing in an otherworldly manner. Baron does switch to a more muted, quieter palette for the flashbacks and the return to earth. The only exception, at least for me, is the eyes of the man in the last panel, seemingly aglow with intent.

All-in-all, the creative team of “Divinity” have returned strongly. Valentina’s story and character is similar enough to Abram but those differences are major differences. If the book keeps up the intrigue it created here, “Divinity II” can be another hit.