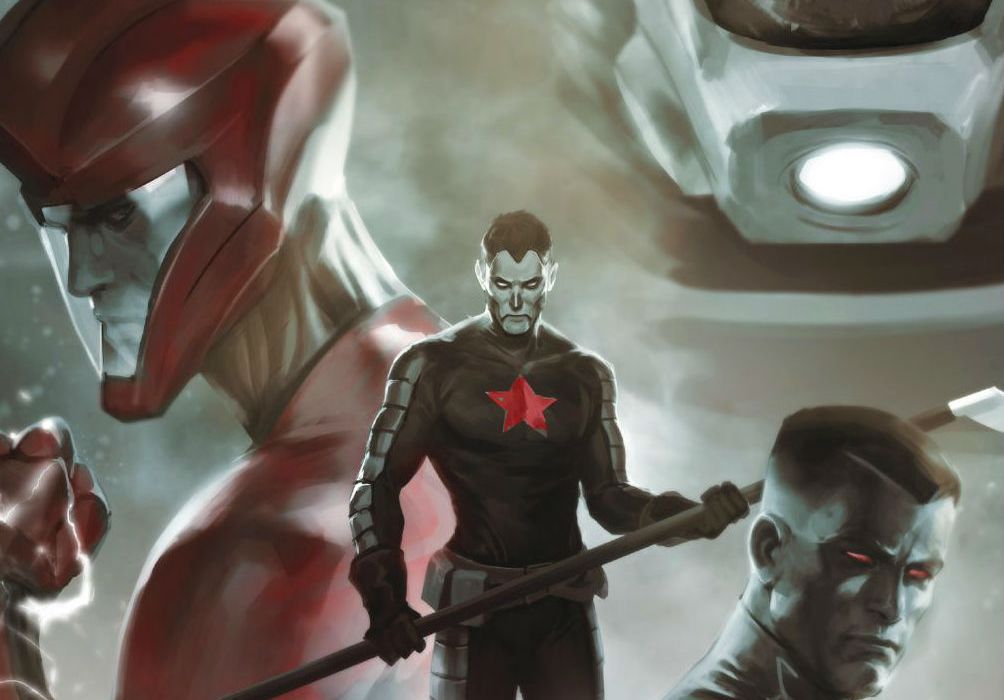 Valiant closes out its year with the debut of another sequel to the massive hit Matt Kindt, Trevor Hairsine, Ryan Winn, David Baron and Dave Lanphhear brought. Now, we see the power of a Divinity unleashed in a massive way. How is it? Let’s find out. 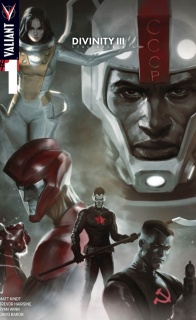 Earth has a new god. The world you know is gone. Welcome to the Stalinverse, comrade.

Oh what a last year and a half Divinity has had. We were first introduced to Abram Adams and what happened to him in “Divinity”. We then saw what happens when those powers are not used in the most altruistic of ways in “Divinity II: Divine Harder”. Now we come at last to “Divintiy III: The Quest For Soviet Go-” uh. Um. Wait, this has a subtitle. I can’t make up my own sarcastic one?!

Well, that was easy. Happy Holidays, everyone!

I’ll give this to the book, it came out at the best time. Hey, a story where the world has fallen into rule of a Soviet Union that never fell. I can’t imagine why that would be topical right now! That being said, this issue was all about the setup. It opens with a nice timeline of events in the 20th century that occurred here in “the Stalinverse”. It’s a nice little show of dedication to world building and that is something I always appreciate.

The rest of the issue is really dedicated to just establishing where most of the major Valiant big hitters are. Framed around intelligence director Colin King debriefing several of the Soviet Union’s vital military assets, including heavy commando Bloodshot, propagandist/assassin Peter Stanchek, and Aric of Dacia (along with the Shadowman weapon). But then comes the twist, Colin King remembers the world as it should be and that he is Ninjak. He has infiltrated Soviet Intelligence in a desperate attempt to acquire allies. How does Colin remember the world as it should be? It’s very vague but I’m just going to assume it’s because “this is a Valiant book written by Matt Kindt so of course Ninjak would have a big part in it.” Regardless, King is now in a corner and he has one last shot: a psychiatric hospital patient named Abram Adams.

And that is where the story leaves off. Like I said, it’s very much all about setting up the world. And I won’t lie, if you’ve read Marvel’s “House of M” then 1. I am so sorry. 2. This should feel very familiar. The world has been altered by an superpowerful reality warper and everyone, super or not, believes this is how the world always was. It follows the steps very closely and Kindt does provide some interesting tidbits to the world, I can’t lie when I say just as a big plot, it hasn’t gotten me fully salivating for the second issue, much less the tie-ins (because of course). Don’t let what you take away from this review is me thinking this issue is bad. It’s not. It’s just very okay to me.

While the story side may have been very slow, the art still has the same high quality that it had in its previous two mini-series. Hairsine, Winn and Baron have only improved working together over the last year and a half with this side of the Valiant universe. Where the previous two series were steeped in mixing the real with the surreal, the beginning of “Stalinverse” is set firmly in the “real”. And it is gruesome in some cases. There are some serious depictions of violence, including bombings and drownings, and the sketchy, sharp style of the artwork makes it quite unnerving to view.

But being more grounded (well, “grounded for Divinity”) also provided the art team some opportunity for some quieter, emotional scenes to show people that are truly broken, the standouts being Abram and Peter. The aforementioned sharpness to the artwork is toned down a bit to allow these larger-than-life figures to look vulnerable for the first time in a long time.

If it seems like I’m being a bit hard on the story of “Divinity III” it’s because I kind of am. This is now the second sequel in this -I guess I should be calling it- franchise and as such, I feel like keeping the kid gloves on would be doing a disrespect. To put it simply, in spite of the vast change in this mini-series, it still feels very mundane. Maybe this is just coming from a cynic who has learned to approach these “big changes” with the assumption that barely a damn thing will change, but after the first two mini-series, this just feels like a step down into average. Maybe the rest of the mini will prove me wrong.

Final Verdict: 6.3- It’s okay, and that may be the most damning thing about it.