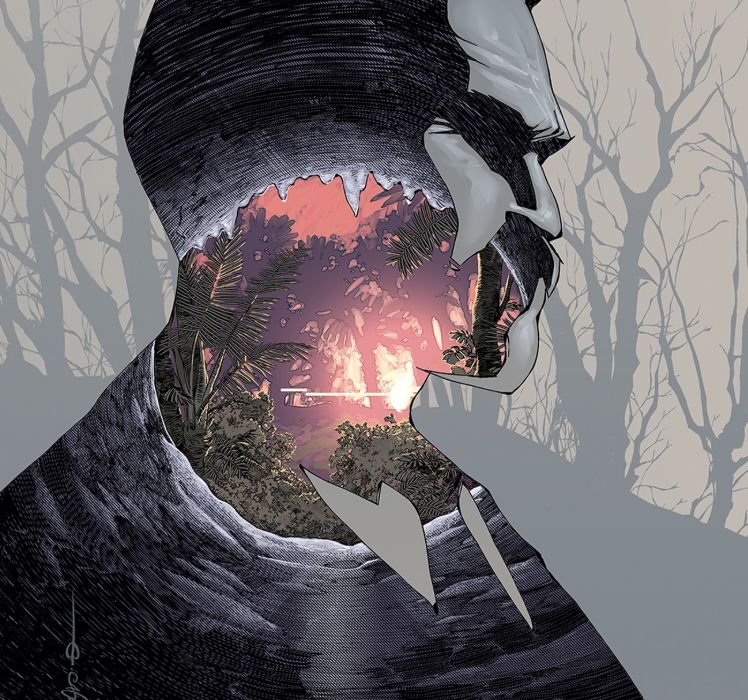 “Strange Skies Over East Berlin” #4 wraps an emotionally fraught and tense miniseries with a revelation, a connection and a possible new beginning. Warning: spoilers ahead. 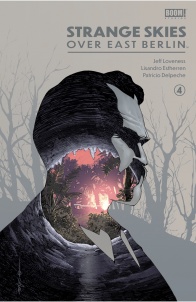 Cover by Evan Cagle
Written by Jeff Loveness
Illustrated by Lisandro Estherren
Colored by Patricio Delpeche
Lettered by Steve Wands Herring has been running and spying for so long, it’s hard to tell the allies from the enemies. As the alien monster closes in on Herring, the mental attack forces him to come to terms with his past – and the truth about the government he works for.

“Strange Skies Over East Berlin” #4 sees Herring and Keiner come to a greater understanding, both of futility and of the roads they’ve taken to get to where they are in this moment. Herring’s given a choice, and he makes it. Is it a good one? Hard to say.

Story-wise, it’s an excellent choice. Loveness and Estherren keep the tension high through three issues, and our introspective journey doesn’t end on a disappointing note. Issue #4 does away with some of the talkiness and repeated forays into broad swaths of existential questioning present in earlier issues. Rather, we’re treated to an act of grace, and it’s beautiful and poignant in its simplicity. Surveillance culture and fears about an ultimate spy state are high in the West right now, possibly for good reason, and we have very recent historical examples to draw from. Loveness and Estherren stay away from sensationalizing the secrets and lies of the Stasi and instead choose to tell the stories of irredeemable men in an impossible situation. The creature, spectral and strange thanks to Estherren’s impeccably spindly line, remains an enigma to the end, and that force of nature quality is the catalyst the book needs to succeed.

It doesn’t matter why it’s here or what it really wants, but the thing from another place opens connections between people that cannot be put back behind the veneer of civility or warfare. The effect matters more for this story, and Loveness and Estherren devote a lot of time in issue #4 to making sure this effect is believable and appropriate. Keiner is a terrifying monolith in his single-minded pursuit of the truth, and Herring’s past (revealed primarily in issue #3) proves he’s no innocent. Even Anzhela’s repeated remembrances of her brother demonstrate a complex character, and she’s as prone to humor as violence in the current timeline. Loveness and Estherren push the boat out a bit into ambiguous territory in “Strange Skies Over East Berlin,” and it’s a smart move. The creative team explores people beyond redemption and demands if not our basic empathy, then a witnessing. Witnessing the complexities of failure of character, of moral corruption and cowardice and jaundiced compassion is important in art, because it teaches us more about ourselves. That’s not to say this book is a morality tale, but it sure does get at that personal discomfort with darkness in an effective and moody way.

Estherren and Delpeche’s visuals are almost impossible to parse individually. Their work on the page coheres for a delicious, strange and haunted effect that incorporates just a touch of cartoonishness to keep the book grounded in its medium. Estherren’s borderless panels segment the snapshots of ruined lives and memories, while the thin borders in the present barely contain the velvet spray of chaos. The splashes and spreads are a watercolor wash of tragedy and horror, illuminated in stunning blues, blacks and muted terracotta tones. Delpeche chooses a palette with a lot of warmth that can accommodate blue tones – the underground oranges and reds of industrial spycraft blend beautifully with the nightmare darkness that follows and the unearthly electric blues and whites of the creature. The book meanders back and forth between the two, but the darker scenes are textured and splashed with gradients to make Estherren’s line feel almost subsumed or obliterated. The effect is excellent and provides tonal chaos with a sophisticated ability to ride the line between visual overload and antiseptic realism.

Wands’s lettering is deceptively simple and straightforward, and lettering a book with this much impressionistic detail is a hard job. Herring’s borderless narrative boxes and uneven typewritten font speak to his unending need to qualify, break down and parse reality, and the slight irregularity gets to his fragile mental state. The choice to go borderless here means there are no harsh lines to fight the incredible detail and flair of the art, and the irregular shape of the boxes makes the incursion of narration feel tenuous as Herring fights for order in the chaos. The dialogue gets a more regular font, with a few hand-drawn details on the consonants to help maintain that unstable style. Anzhela’s final dialogue is floaty and irregular but readable, and the burst balloon at the end of the book is still regimented and small enough to avoid an inappropriate level of campiness.

In the end, Herring’s neither demonized nor lionized, and that lack of redemption makes “Strange Skies Over East Berlin” more sophisticated and nuanced than most of its WWII-gazing peers. It’s unclear if he’s made the right choice, and it’s unclear if Keiner will use what he’s been given to make a choice of his own. The comic doesn’t bully us into forgiveness or moral superiority. Instead, the book allows us to draw our own conclusions. What matters is the narrative beat of the choice itself, and it’s pitch-perfect. If we can’t grant a moment of selflessness or sacrifice to our artistic monsters, who are we, really?