“Doctor Fate” #4 continues to explore a young man’s journey as he attempts to wield the ancient and powerful Egyptian helmet of Fate. Writer Paul Levitz and artist Sonny Liew have created, along with colorist Lee Loughridge and letterer Steve Wands, another issue that is told naturally and with an expertise that is evident on every page. 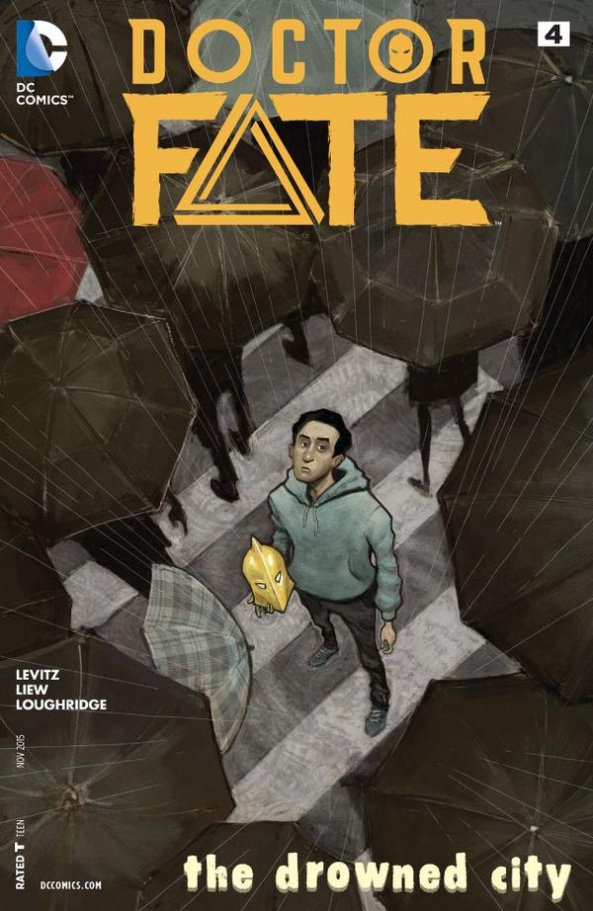 Life is getting harder for the new Doctor Fate. Now, an ancient god wants to destroy him, a mystical flood threatens to drown him, and the riddle of the Sphinx eludes him. Also, homework.

Levitz and Liew are titled storytellers in the credits of “Doctor Fate” #4. It is appropriate for how seamlessly the story and art come together. Levitz’s story has been slow-building so far while readers discover the great responsibility that has been forced upon Khalid Nassour by an Egyptian god. Not only must he quash the world-ending plans of another ancient god, but he must learn how to use the helmet of Thoth that he must wear as he attempts to save the world from floods and other “natural” disasters conjured by the god Anubis. Levitz’s collaborators assist him in making each issue improve upon the other as evidenced by “Doctor Fate” #4.

Although it may not seem like it, a lot happens in this issue. Levitz ably juggles various aspects of Khalid’s life as he traverses his way through med school, Egypt, and interactions with various beings close to him or soon to be influences of the highest order. From a conversation on a rainy street to a father’s pleas in a hospital, Levitz makes every word count toward building Khalid’s world. Levitz’s script is lean, which allows the artistic team to gain a spotlight that shows off their impressive strengths. The captions with Khalid’s thoughts add to the issue’s natural aura, giving us a glimpse into the mind of a young man who is dealing with more than just the fantastical. We are growing closer to this character. Levitz’s dialogue is fun and breezy, even when coming out of the mouth of an unlikely manmade structure.

Liew’s credit as co-storyteller for “Doctor Fate” #4 is well-deserved. The emotions and weight of the situation is at once magical and grounded. The balance compels us to be surprised when scenes transition from situations we can empathize with to ones that are beyond Khalid and our understanding. Liew is brilliant at portraying both a realistic rainy day in New York and the trippy realm of Nabu. Wherever Levitz and Liew take us is a place that is always interesting and beautiful.

Liew is also adept at strong characterization through his thoroughly original artistic style. Although Khalid is confused and searching for answers, he is portrayed by Liew as a brave man who is worthy to be a future hero. Strength and bravery come through in Khalid’s calm demeanor. Facial expressions and body language convey so much in Liew’s art even though it can easily be overlooked. The fluidity of his style is mesmerizing, with the layouts and characters’ points of view always deserving of second looks to observe the care taken in creating this book.

The art is not the only mesmerizing quality of “Doctor Fate” #4. It seems like I’m always hyping the coloring magic of Lee Loughridge. It’s easy to do when you get an issue like this that is colored in such a thoroughly hypnotizing way. Loughridge proves the diversity of his color palette in this issue, going from dreary rain soaked streets to the bright sun of Egypt. Like Liew, Loughridge tells a story and evinces such powerful emotions through his artistry. Fate’s yellow helmet and the yellow energy it emits stands out amid the gloom of the city. When Khalid enters Nabu’s realm, a phantasmagoria of color and illumination transports a regular guy to a world bursting with mystery and ancient wonder. Loughridge is an essential reason for this book’s success.

Steve Wands’ lettering is also a standout aspect of “Doctor Fate” #4. Word balloons and the words themselves change shape and coloring depending on the character or entity. The helmet’s word balloons are surrounded by a yellow halo and the word balloon tail drips with the nonchalant ease of a power who knows who’s in charge. When an Egyptian monument speaks, the words gain in size and the bloody red color of life. Like any great letterer, Wands has a distinct style that contributes to the overall quality of the book and should not be overlooked.

“Doctor Fate” #4 is proof that this book’s creative team is building toward something impactful. Khalid and his journey has been fascinating so far. It’s refreshing to see a title build upon a hero’s journey because, when Khalid finally accepts his fate, it will have that much more of an effect.

Final Verdict: 8.9 – “Doctor Fate” is worth putting on your pull list. This most recent issue displays a creative team’s mystical abilities.