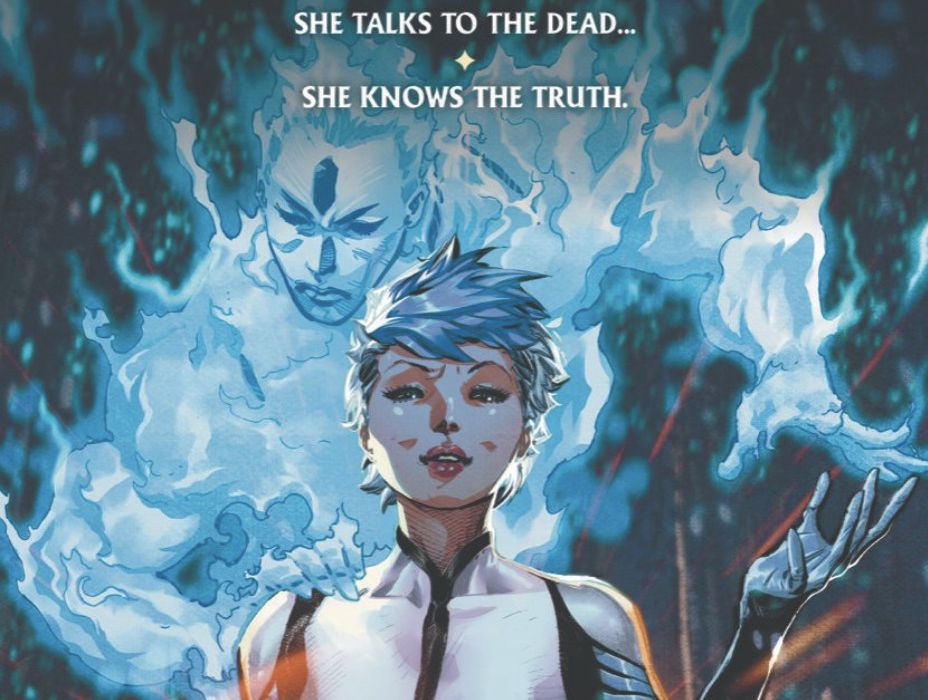 “Doctor Mirage” has always been one of the more interesting highlights of the Valiant lineup, existing on the fringes of the action with series that end up being much more introspective than the usual superhero affair. Now, with a superstar creative team onboard, the new series opens up with the revelation that she’s dead! Thankfully for us, the debut issue makes the series more alive than ever. Whilst this may seem like the biggest spoiler of the comic, be aware that more may follow in the review. 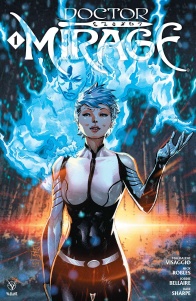 How do you solve the case of your own death?

Paranormal expert Doctor Shan Fong Mirage was born with the ability to see and speak to the dead—an ability that has mysteriously stopped working. Have her powers failed or is something far more sinister at work? Will she figure out her fate and the fate of the one she loves the most? Valiant’s gripping supernatural mystery starts here!

As someone who’s never fully invested in this character before, I was easily brought up to speed by writer Mags Visaggio before diving headfirst into the new conflict. Visaggio has a faux-narration voiceover in Mirage’s head that acts as Mirage’s way of clinging to her past as a superstar whilst also being a punchy and effective tool for keeping newer readers in the loop. The opening narration is especially fun, with short bursts of excitement like “She knows the truth! She talks to the dead! Hold on! Get ready!”. However, the narration also plays cleverly into Mirage’s own melancholy, with a voice that feels more fitting as behind the scenes narration, like a shot of Mirage laying in bed that’s dictated with “Camera two. Keep it tight on Shan. This is our misery shot. Really make her feel it.”.

Visaggio also brings in an interesting new character in the form in Grace Lugo. She’s the one who drops the bomb that both she and Mirage are actually dead, however, she’s more than just a plot device: Visaggio gives her the snarky, deadpan delivery of a modern teenager. She’s a lively and raw feeling opposite to Mirage’s self-wallowing tragedy, giving the comic a much tighter sense of pacing and equally feeling weirder than sorrowful. At her core, Grace Lugo is just an incredibly fun POV teenager, popping psychedelic magic pills and keeping us entertained with her casual charm. Visaggio balances character and plot well for the most part through her, my only problem is that she doesn’t give us enough of a concrete threat to give this debut issue the stakes it deserves. Sure, we know Mirage is dead, which is definitely a hook to keep us intrigued, but the nature of everything else in the comic seems a little vague, which might also be due in part to Grace’s personality.

In most occult/supernatural comics, visuals are an important aspect to make them distinct from your usual superhero/sci-fi affair, and Nick Robles nails that distinction. The whole issue has a velvet-smooth flowing pace to it, established in the very first page as our vision tumbles gently downwards from a planet to an outstretched hand, before landing on Mirage herself falling endlessly in this psychedelic void. Roble’s framing and positioning of panels in later pages continue this buttery feeling. Pages like the closeup of Mirage in her bed work well, where the two panels zooming further in on her face are buoyant and elastic, floating above the main scene almost like thought bubbles. Of course, there are more straight-forward sequences that serve as downtime, giving the readers a cleaner narrative sequence to gather their thoughts, and ensuring that each wild and intricately crafted moment doesn’t feel oversaturated. Instead, they feel like fleeting moments of ecstasy, like when Mirage attempts an incantation to get back in touch with the dead that only works for a short, mind-bending period of time before we crash back into normality.

Outside of these moments, however, Robles has a good grasp on human emotions that covers the wide spectrum between Mirage and Grace. Mirage herself is complicated as she surfs through levels of the grief of losing her connection to the dead, and furthermore, her husband. Robles does the terror of literally tumbling into the unknown on the first page really well, before cycling through cold ennui and eventual resolve to do something about her situation, the latter of which Robles ensure has an underlying feeling of cold sadness as Mirage’s face is either half-cast in shadow or looking downwards. After she attempts the incantation, Robles gets a powerfully silent page, where we see Mirage trying to hold back her emotions one last time before completely giving into sadness, a sequence which grows smaller and smaller with each panel effectively conveying the feeling of hopelessness. Grace is a much more straightforward character, always appearing to have a warm composure about her every action that lifts Mirage somewhat, which eventually grows into a creepy awareness of something more, that begs readers to come back and learn what the heck her deal is.

Being the top-tier colorist she is, Jordie Bellaire gets to go wild with her coloring on this book. Naturally, the mind-bending magic/pandimensional scenes from Robles are punctuated with glowing palettes, like the midnight-to-dawn gradient of the first page, the pastel-candy colors of Mirage’s incantation, and the searing block colors of Grace’s pill-induced visions. However, the colors interestingly cycle back to a base color depending on the character in focus. In the entire first half of the book, there’s a blue, cooler tone that clearly evokes Mirage and her melancholy that is most present whenever she’s grounded in her reality. However, when Grace and her red hair infiltrate Mirage’s life, the palette starts to get more vivid and heated, growing more and more until the final shot is one of Grace bathed in an eerily warm, sunny gradient.

“Doctor Mirage” #1 is a great reintroduction of one of Valiant’s most compelling recent characters, combining the fantastically weird with the genuinely emotional. The stakes might not be as concrete as the plot deserves, but the characters are complex, their connections are interesting, and the art is soaring and playful. This is a book that feels unique from the rest of the Valiant line and leaves me excited as to where it will go.

Final Score: 8.7 – A crazy, emotion romp through the more psychedelic side of the Valiant universe.