The world of Black Hammer expands again with a new miniseries dealing with one of the most sacred of superhero tropes: Daddy Issues(tm) 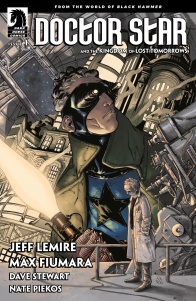 Cover Max Fiumara
Written by Jeff Lemire
Illustrated by Max Fiunara
Colored by Dave Stewart
Lettered by Nate Piekos
This dual-narrative story set in the world of the Eisner-Award winning Black Hammer series chronicles the legacy of a Golden-Age superhero.

An aged crime fighter desperately wants to reconnect with his estranged son, who he hoped would one day take the mantle of Doctor Star. Over the course of the story, we learn his World War II-era origin, how he got his powers, his exciting astral adventures, the formation of some of Black Hammer’s greatest heroes, and more in this heartbreaking nostalgic superhero tale about fathers and sons. Nostalgia is the pain of coming home and the fantasy of the imagined home being broken. That is central to the first issue of “Doctor Star and the Kingdom of Lost Tomorrows,” a Black Hammer miniseries from writer Jeff Lemire and artists Max Fiumara and Dave Stewart, as the titular character returns home to make peace with his son.

The articulation of a superhero history in various Black Hammer titles has generally acted as an aesthetic choice. Lemire uses it not to make characters that are dark-n-gritty deconstructionists, but often depressed and very human versions of themselves. This aesthetic is put toward a deeper purpose as Fiumara and Stewart use our understanding of what Golden Age comics looked like to create dueling realities between the muted present and a brighter, fantastical, past. These dueling realities constantly alternate from past and present with the letter Dr. Star has written to his son driving things forward.

By jumping between two separate time periods (1940s and present), artist Max Fiumara employs two distinct but connected styles. Technically, they aren’t that dissimilar. For the present period, Fiumara appears to twist the scratchy inks of Dean Ormston in such away to give his figures a more realistic dimension. The war period takes its cues from Golden Age comics but that doesn’t mean simple cartooned figures. Environments and outfits do not lack for detail, in contrast to the present, everything has a fuller outside line. Where once there’d be three to five thin lines there is just one or two thicker ones. The biggest difference is how he uses these two styles to represent Jimmy Robinson. The younger Robinson is always standing strong and powerful. It isn’t that his present self is so much older, but how Fiumara draws him bearing this weight of an adventurous life and regret everywhere he goes. Where once was a man standing tall next to the Liberty Squadron, is a man with the slightest of hunches.

The page designs between the two periods couldn’t be more different. During the war period, pages burst with life often overlapping with one another. It is the period that gives us a fantastical work montage as spread, that even without the narration would’ve communicated the immense amount of time and work that went into creating the suit that would capture the stars. In the present everything is much slower. Pages are often just four horizontal panels read vertically. These pages place an emphasis on the subtle shifts in Robinson’s expression, the environment and image tells it’s own story even as it is accompanied by his letter to Charlie.

In the least surprising aspect of this comic Dave Stewart, of the eponymous Multiversity Award, does a fantastic job in this issue. Much like Fiumara’s work, it is how the two-color pallets he employs play off one another that communicate the pain-joy in this issue. In the flashbacks everything is saturated in the bold untextured way of Golden Age comics, even if the pallet itself is more modern. The pallet used for the present isn’t so much muted as it is depressed. A sickly greenish gray seems to mix with everything as Robinson wanders through the city. Stewart also changes application for the present pallet, employing a more painterly process with slight blends that add a little extra dimension to Fiumara’s figures. This pallet with the sickly green and gray, goes a long way in communicating the sense of depression from the present-day Robinson.

On their individual levels, these artists communicate a clear sense of history. When they are put together in sequence with Lemire’s narration, the full sense of nostalgia this issue has been building towards breaks through as the homecoming occurs. The act of coming home is doubled, in the past he stands with his Squad mates and is hailed a hero, in the present wanders a hospital searching for his son. Somehow Stewart manages to create that pale light hospitals seem to have that just washes everything out in a false sense of cleanliness. This is intercut with highlights from his time in the war with the Liberty Squadron and the difference between pallets and styles couldn’t be clearer. The lack of saturation makes these fantastical highlights pop even more as they are set against solid yellow-orange backgrounds. The quite movements of the present stand juxtaposed against the spectacular action of war. As he stares down at his son, like Don Draper staring at family slides, the final piece of nostalgia locks into place. The pain, the shattering of fantasy, the conclusion his letter and everything this issue has been priming us for: Jim Robinson was not a good father. He was busy, doing other things, being a “man,” but not the one his family needed.

Final Verdict: 8.0 – “Doctor Star and the Kingdom of Lost Tomorrows” gets off to a fantastic gut-wrenching start with the portrait of man’s life from his highest moments and unspoken deepest regrets.