It’s all going to hell for the magic world. Old Stephen’s powers have been drained by the Imperator, who is ready to finish off magic on our world forever. So how does the counter-attack begin? Let’s find out. 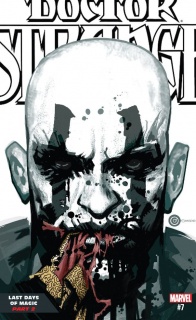 LAST DAYS OF MAGIC PART 2 As all of his magic dissipates, Doctor Strange is at the mercy of The Imperator! The powerless sorcerer is no longer supreme and can’t possibly best a super-powered foe hell-bent on his destruction.

“Doctor Strange” has been a book that seems to have been flying very much under the radar, despite the upcoming movie. (Granted, the movie does look like it’s going to be a painful exercise in “How to Make Magic Boring” along with a nice heaping dose of “Holy Fuck, is This Racist” on the side.) Which is a shame, because Jason Aaron and Chris Bachalo have been crafting a fun long-form story in the same vein of Thor in ‘The God Butcher’. Last issue saw the good Doctor brought to his lowest. Now comes the climb back up.

‘The God Butcher’ is not something I mention lightly since there is a great deal of D.N.A. from Gorr in the Imperator’s origin, with a splash of Superman. Being the surviving child of two scientists that wanted to challenge their magic-based civilization (specifically, the liberal amounts of human sacrifices to a certain eldritch creature known very well to Stange fans) and seeing his parents killed before him instilled a great hatred of magic in the Imperator that lead him into being the science-powered powerhouse he is today. Like I said, there is a great deal of similarities between these origins, but Aaron does a well-done job of sewing the “magic vs. science” theme thats been running since the beginning to provide a bit of difference.

Something else that I am really enjoying is the inclusion of Illyana Rasputin in this book. When Brian Michael Bendis wasn’t creating the colossally regressive idea of bringing literally the five oldest characters in the X-Men franchise to the present and then having the arrogance to call them “All-New”, he did have Magik and Strange meet and form a peership. And seeing Magik play foil/second in command here is a load of fun.

Now for the art, I need to make a confession: I was never really a big fan of Chris Bachalo’s work until I saw it in the book. Whenever he did other books, I always thought is weird art would go against the tone of the book, but “weird” is the mission statement of “Doctor Strange.” Something of note that I really liked is the lack of background as well as having objects like tentacles and lightning segueing between panels in an attempt to simulate that breakdowning of the magical forces.

But it’s not just the linework and the heavy inks (courtesy of the army of inkers followingBachalo) that make the book look weird, there is also the contrasting color palette. The crimson and muddy browns clashing with the pure and terrible whites of the Empirikul. There can be some problems with it, like with white Empirikul soldiers on white snow backgrounds, but for the most part, the drab color schemes work.

That all being said, I do have one final criticism about the art, albeit it’s more of a personal thing. Look, I know Bachalo did the design and all, but man do I wish Illyana had a different costume.