Fresh from an opening mini-series and now starring in his own ongoing, the Doctor that brought Who into the 21st century is off on a new adventure with Rose Tyler and Captain Jack Harkness. How does it go? Let’s find out! 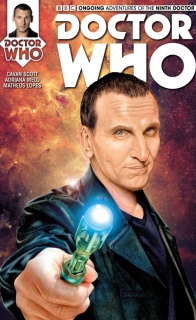 The Ninth Doctor is BACK – and this time he’s ONGOING! In Part 1 of ‘DOCTORMANIA’, the Doctor, Rose and Captain Jack uncover a mysterious video. Tracking down its source could help Jack uncover why his mind was wiped – but the first step takes the Doctor to a planet where he is, inexplicably, a celebrity!

Okay, Confession Time! I’m not exactly a fan of when writers decide to talk about or have a stand in for or examine the fandom of a franchise within a piece of work.

I’m not saying it can’t be done or can’t be done well or you can’t have characters that are fans. Of course not. Back in the day, Tim Drake was a fan of the original Batman and Robin and you have more modern examples in Kamala Khan and Faith Herbert. Limiting it to just Doctor Who, you actually had a very nice comic by Paul Cornell and Jimmy Broxton where the Eleventh Doctor visited a Con in our world and literally met Matt Smith. It can be done well!

So, how is it done here? Kind of very stock? It’s not as bad as, say, when Brian Michael Bendis pretty much took a nice dump on fangirls when he was trying to talk about race in a recent issue of “Spider-Man”, but here it does feel very stock. Basically, the Doctor and his companions land on the planet Gharusa Prime where apparently there’s a very popular television show starring “the Doctor?” (no, the question mark is not a typo) and his companion “Penny” (assuming it’s produced by the GBC).

And, of course, they encounter a fan, Yani. Now, I want to start by saying, there are many ways for fans to act. We all express our fandom for something in a variety of ways, each with their own benefits and detriments. With that in mind, I feel like I have to repeat what I said before: she feels very much “stock fangirl”. She’s part of a fanclub. She goes on “Stumblr”, gets “feels” e.t.c. e.t.c. Perhaps it’s to set up further examination in continuing issues but as of now, it’s very bland.

Haven’t really talked about how Scott gets the Doctor, Rose, and Captain Jack yet. I will say, they’re fine. Scott had time in the original mini-series to get their voices down well enough. I do like that Rose takes a more pro-active approach in this story. This is very much the Rose Tyler I like, before the latter-day RTD era days where I just groaned whenever her and Ten were in scenes together.

Adriana Melo’s artwork is, for the most part, pretty good. She does a good job getting the actors’ likenesses down and does have a knack for character expressions, ranging from a sly smirk from the Doctor to the joy Yani has meeting her hero. That said, I feel like the inking could have been better. She’ll use a thicker line one some pages and it really makes the pages look rough. Combine this with Matheus Lopes’s coloring -which is serviceable, but with nothing that pops out- you have artwork that has been standard with many of Titan’s “Who” books.

But what really got my bee in a bonnet visually was the lettering. You have some dialogue bubbles that are so cramped. You have a couple bubbles that are too big and the text is too small I had to zoom in to read. On one panel you had a dialogue balloon tail reaching all the way across the rather large panel, making it really distracting.

In the end, this is not a bad issue. I kind of wish it was, because at least there I feel like I’d have more meat to work with a discussion. As it is, just the start of an okay story that I feel like I have seen before. There’s potential to have a conversation about fandom, but just as much potential to inadvertently decry the fans in really terrible ways.

Final Verdict: 5.6- A very average start to a Doctor Who story with some meta exploration of fandom.