Alice’s trip to her first ever space station puts her, The Doctor, and John Jones in the crosshairs of a mysterious formless monster and SERVEYOUInc. 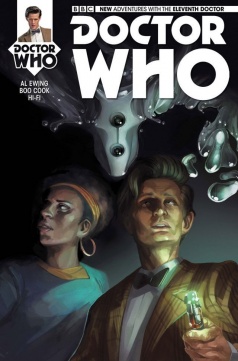 Alice Obiefune always wanted to see a space station – one of those proper ones. Maybe with an exotic matter wormhole nearby, if it’s not too much trouble. The views are breathtaking… but so is the formless creature creeping through the station, stealing voices and inflicting comas on those research scientists unlucky enough to be caught. Tracking the temporal trail of the slippery SERVEYOU incorporation, has the Doctor found more than he bargained for? And will this entity from between the stars be the death of them all? 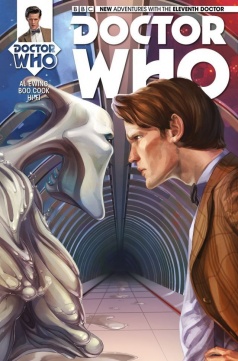 Still trapped aboard the SERVEyouInc research satellite, Alice and the Doctor must unravel the mystery of the creature codenamed ‘ARC’ – while staying one step ahead of its whisper-quiet rampage through the station! But there’s something essential the Doctor’s missing – something he’s overlooked. Can Alice help him see it, in time to save her life… or is the story of the Doctor’s favorite sarcastic library assistant doomed to end in the icy depths of space?

(Before we dig into the meat of these issues, a clarification: after last week’s post went to press, Comixology informed me that this series is not part of Comixology Unlimited, so apologies for any confusion that I caused.)

The first arc of “Doctor Who: The Eleventh Doctor” closes out with our first two-parter, an adventure on a SERVEYOUInc. space station that should just be routine.  But there’s something creeping through the station inflicting the crew . . . and of course, it has the visitors in its sights.  What is this formless mass making its way through the halls. and can our humans and Gallifreyian stay one step ahead of it?

Owing to the connected nature of these two issues, it’s best to review them in tandem.  And since four and five sum to be nine, here’s nine thoughts on “Whodunnit/The Sound of Our Voices.”

There’s a new artist and colorist for both these issues, and from my experience with the “Doctor Who: The Thirteenth Doctor” series, this seems to be a common occurrence. It’s fun seeing how different artists depict our characters, but there is also something to be said for consistency in our creative teams, so I do hope that our previous artist and colorist return in later installments.

Boo Cook, a veteran of 2000AD, certainly packs pages with rich intricate detail from top to bottom.  I Iove the texture he adds to the Doctor’s face – – only four issues in, and this is the best depiction of Matt Smith thus far.  It has the downside of giving the Doctor a prematurely aged look.  Sure, we know he’s an old soul, but he’s not that old. (At least not until the start of “The Impossible Astronaut.”)

Mr. Cook likes angular faces and sharp edges.  Everyone here has precise, square chins and elongated visages. It conveys power, wisdom, and boldness. This is a team that is starting to gel as they travel together, and you can see their growing experiences in his artwork.

Never have you met two more opposite folks than John Jones and Alice Obiefune, and their conversation in the space station exemplifies this. John is full of wonder as to the vastness of space before him, and you have to just love his joy and innocence.  Even when he confronts the beast at the climax of issue #4, there’s no fear, just awe. Meanwhile, Alice is all business – – wanting to get back home to deal with her landlord issues and not being a pet project for the Doctor.  These two can provide balance to each other, and it will be nice if we see this dynamic explored in future issues, how each can help the other with emotional growth.

What I hope the comic does not do is throw them together as love interests. Yes, Amy and Rory were a couple when they traveled with the Doctor, but that was before they set foot in the TARDIS.  There was that established romantic history that led to a fun dynamic on their adventures, that also didn’t leave the Doctor (most times) as third wheel. I’m not sure how much I want spaceship as matchmaker.

“Whodunit” also introduces us to more of Alice’s formative years.  A flashback rendered in soft sepia tones and jagged panel borders shows young Alice and her mother visiting her father’s grave . . . and some foreshadowing to her current situation. The epigraph on her father’s tombstone reads “The world is complex, do not lose hope” – – a lesson the Doctor is (slowly) imparting on her. Young Alice also expresses a desire to “go away into space and not ever come back.”  She fulfilled the first half of that now . . . but let’s see if she does decide to come back. No doubt she will . . . but it’s a matter of when.

(A second scene later on in the issue set in that cemetery includes another Easter egg. Look close at the name on one of those tombstones.)

The SERVEYOUInc. connection here is that they run the space station where this story takes place.  They sure just have their hands in everything, don’t they? That’s some wry commentary on Al Ewing’s part – – perhaps unintentionally, perhaps not – – on the tentacle-like power certain brands have over our lives, and the dangers that power can bring. The mysteries of this company continue to unfold, and I like how it’s being doled out in a slow, organic way. We learn as everyone in the story learns, we don’t know more than they do – – and that keeps all of us on our toes.

After last issue’s depictions of guns (even though it was part of a carnival game), I’m happier to see The Doctor broker peace via nonviolent means between the creature and the station’s security team. Communication turns out to be the bridge to understanding between the humans and ARC (Autonomous Reasoning Center) – – it learns through the sound of people’s voices (ROLL CREDITS).

There’s also a fun callback here to classic Who, with the Doctor proclaiming ” ‘There will be no battle here,’ as a wise man once said.”  The wise man turns out to be the Doctor himself, with the quote coming from the Sylvester McCoy-era story “Battlefield.”

My reference as I go through this series, the Doctor Who: The Eleventh Doctor wiki, spoiled me by revealing that ARC becomes one of the Doctor’s companions in this series. This now brings us the third companion on this run. It’s not anything out of the ordinary – – both William Hartnell and Jodie Whitaker traveled with a trio of humans. But both of these cases had the trio coming on board at the same time, not introduced one at a time. Just as we’re getting to know Alice, we meet John Jones. And just as it seems we are getting to know him, we have a third in the mix.  This TARDIS may just be getting too crowded.

There’s an interesting contrast to note here in artwork. Whereas Boo Cook provides such intricate detail on his character work as mentioned earlier, ARC is less so. It’s not completely shapeless, but compared to what we see in the Doctor and Alice, it has a more nebulous, soft, flexible form. It’s a creature in search of an identity.

I wonder if that form will evolve as it finds identity traveling with the Doctor.

My suspicions from last week on Alice leaning more GenX and less towards millennial turn out to be fact in issue #5. 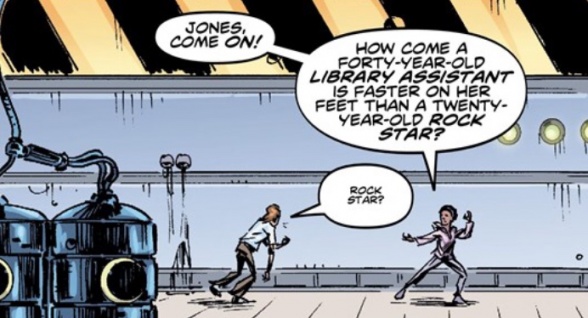 I continue to enjoy the backup stories in both these issues. They do a fun job of poking fun at Doctor Who lore or calling back to Matt Smith’s run, such as we see in issue #5. And one of issue #4’s strips has a fun timely Halloween humor tying in to its release date in October 2014. The stronger ones are the Marc Ellerby strips for they do a great job establishing a scene from beginning to end.  The #WeLoveTITANS ones are fun, but are more vignettes into a scene than telling a full story.

Five issues in, and scripting is starting to hit its stride. It’s balancing action and characterization beautifully, even as the TARDIS gets a few more roommates. I imagine Ewing has a plan for everything, and I’m enjoying seeing how he slowly weaves in SERVEYOUInc. into the story, while still providing adventures that can be appreciated independent of each other. The slow reveal of all these details keeps me intrigued for more.  But I also want some time with our characters, exploring their backstories and what that brings to their journey with the Doctor.  With that balance, and a consistent art team, the seeds are here for a classic.

Next week, we’ll be looking at issue #6, “Space in Dimension Relative and Time”

If you’d like to read along with me this summer, all issues of the series, single and trade, are available on Comixology. If you are in the United States or Canada and your local library has access to the Hoopla Digital service, you can make Alice happy by borrowing single issues and trades from the series via your local library.

“X-Force: Angels & Demons” and the Depiction of Violence

The Summer Binge continues with the look at a series that is most definitely not X-Men work.Written by Craig Kyle and Christ YostIllustrated by Clayton CrainLettered by Cory PetitCollects X-Force (2008) #1-6.There are lines that the X-Men have sworn never to cross. But Cyclops realizes that some enemies need to be dealt with permanently — […]

Hoo boy, where to start with this week’s batch of “Countdown” issues. These are some of the most plot-dense yet, to the point of feeling overstuffed. On the one hand, that’s a welcome change from the vast majority of the previous 32 issues of the series, which mostly felt like they were spinning plates. On […]