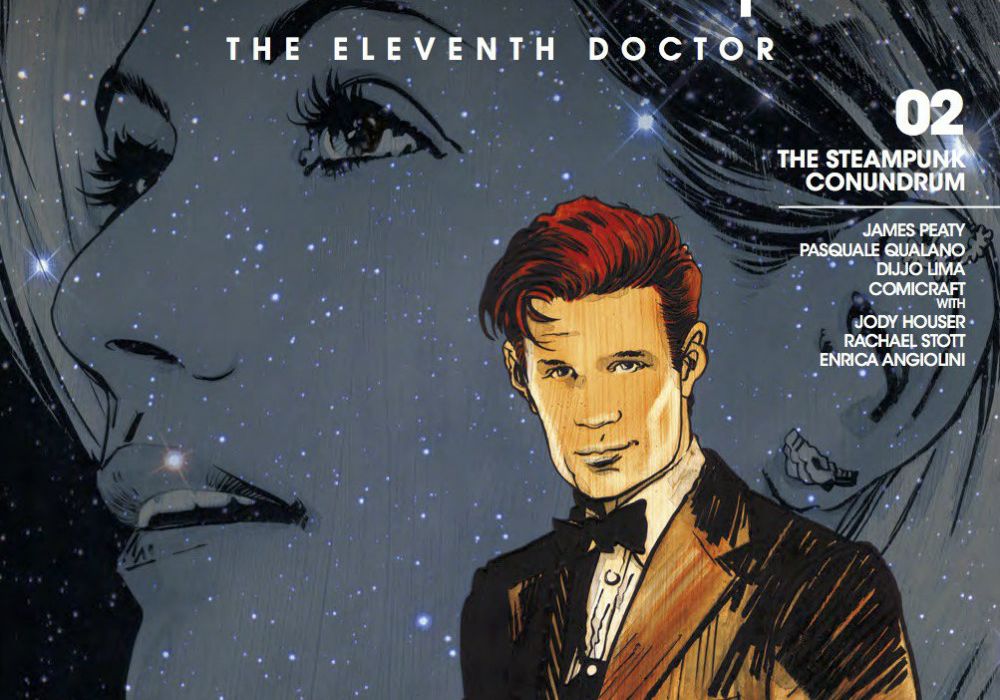 Whovians everywhere are waiting eagerly for the new season of Doctor Who to air and give us the Thirteenth Doctor. The comics are preparing for it too, building up to it with a mini-series focusing on the three Doctors leading up to her. Free Comic Book Day gave us a comic sneak peek, but it was no more than a single page – maybe this will scratch the itch. 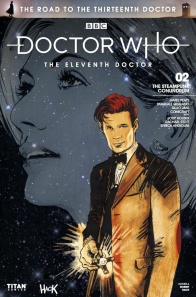 Continue the road to the Thirteenth Doctor with the second of three stand-alone stories featuring the Tenth, Eleventh and Twelfth Doctor!

The Eleventh Doctor and Alice visit 19th Century San Francisco, but there’s just one problem – it’s full of robots! Do they come in peace? Or could their displacement in time signal something far more sinister?

Each issue contains a serialised short from the creative team behind the new Thirteenth Doctor ongoing series!

In spite of being called “The Road to the Thirteenth Doctor,” this “Doctor Who” comic has nothing to do with the 13th Doctor at all. Instead, it focuses on the 11th Doctor and a comic-only companion. However, as a self-contained one-shot, it’s easy enough to enjoy without having to have followed any of the other “Doctor Who” comics up to this point, as long as you know the general idea: The Doctor is a madman with a box, the human helps, and it all gets wibbly-wobbly and timey-wimey.

One thing that makes this issue appeal to me as an individual is the choice of location – for having all of time and space at his disposal, the Doctor doesn’t typically visit my home state, so placing this adventure in San Francisco is a pleasant surprise. Some background shots even include architecture and building designs that are familiar to anyone who’s driven through the city, give or take 120 years. The fact that the climax takes place at a still under-construction Pier 21 is a nice touch as well for California natives.

As far as stories go, what we get is pretty straightforward. The Doctor and his companion (Alice Obiefune) arrive in a random time and place (late 1890’s San Francisco), see something unusual (robots walking about) and investigate. Cue alien plot, the Doctor does something clever, and the day is saved. None of this is a spoiler, since it’s basically the plot of every “Doctor Who” comic and episode.

How the story unfolds, though, is entertaining enough. We get the usual cold open setup that sets the scene and the threats ahead, before watching the Doctor investigate and uncover the secrets behind the mystery. There’s a decent plot twist or two, and an unfortunate moment where he can’t save everyone still sets up the foreshadowing he needs to inevitably save the day.

Regarding the specifics, robots in 1890’s San Francisco is a good enough hook. The way it’s revealed is nicely done, as the panels pull back from the conversation to reveal the robots walking about. In one panel we can see exactly what is off, but the other characters in the scene, humans interacting with the robots or paying them no mind, reveals to us as readers that this is a normal sight for them without needing to state it directly.

With that said, there’s still plenty of technobabble to enjoy, but it wouldn’t be “Doctor Who” without it.

Where the writing’s real strength comes through is with the banter between the Doctor and his companion. While I’m unfamiliar with Alice from the comics, the type of friendship shared by the characters is evident off the bat as they talk and toss about clever lines. Alice gets some nice one-liners in, working off the Doctor’s setups, giving them good chemistry as friends and partners. James Peaty gives them clear voices and plenty of nice lines, bringing the characters to life.

Pasquale Qualano does a fine job with the artwork for most of the issue. There’s some nice use of shadows, mist and angles in the opening scene, before the illustrations bring San Francisco to life. In fact, just the way that many of the panels are set up and angled does wonders for the scenes, such as utilizing an upward angle from below to really show how dominating and intimidating a transformed robot is.

Dijjo Lima’s color work tends to help with these scenes, providing just the right amount of light or shading to properly set the mood. The sun over the San Francisco bay creates a beautiful red sky, and the shifting colors throughout the day make the passage of time feel real and natural.

The character designs tend to be good, showing the characters’ personalities in the way they’re illustrated. Alice is particularly expressive, and the fact that the dress she ends up wearing has Dalek-style bumps along it is a nice touch, one that the characters remark upon.

With that said, the Doctor’s design falls just a bit flat; it’s always difficult to properly adapt a live action character into comic format, and it sometimes feels as though the artwork is capturing his shape and bare details without getting the essence of Matt Smith’s Doctor in the design. With that said, it’s a minor nitpick and one that can certainly be forgiven.

Following the main story, we get a small backup issue by the creative team that will be behind the “Doctor Who” comics for the 13th Doctor. This may be where we get the setup for her first arc, with a mysterious portal appearing briefly, without the Doctor even noticing or remarking upon it; this is certainly a Chekhov’s Gun that we’ll see pay off during the full series.

It’s a smaller segment, set during the Doctor’s time with Amy and Rory. There’s no adventures, just the Doctor wondering how people take it easy and do nothing as his companions relax. Yet Jody Houser capture’s the Doctor’s personality very well in this backup, making every line easy to read in Matt Smith’s voice. It’s a good character moment, delving into his thoughts and feelings, including a few amusing moments (such as thinking a car can grow back parts like a TARDIS can). Rachael Stott does a good job capturing the specific details of the Doctor’s face and expressions while providing some great background details, and colorist Enrica Angiolini even brings the Doctor’s tweed jacket to life.

If this is the team we can expect for the 13th Doctor comics, we have a lot to look forward to.

Overall, “The Road to the Thirteenth Doctor” makes for an enjoyable one-shot, although mostly noteworthy for its choice of location. But for fans of the comics, it will be an enjoyable read.

Final Verdict: 6.4 – An enjoyable if slightly formulaic “Doctor Who” story, with good dialogue, and some very well-composed panels. If you need your “Doctor Who” fix before Jodie Whittaker’s season begins, this is a fine choice.