In order to understand one’s present (and perhaps one’s future), it’s important to look to one’s past. On the precipice of the Jodie Whitaker era, the Doctor Who comics pause to look back at the stories and the people that brought us to this place and time in space. 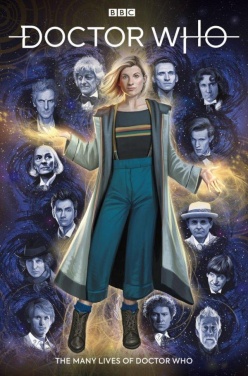 The ultimate celebration of Doctor Who – a perfect introduction for new fans and a brilliant tribute for long-time Whovians!

When you die, your life flashes before your eyes – and the Doctor’s had a lot of lives! The Thirteenth Doctor relives unseen adventures from all her past selves!

For Whovians like myself, October 7th shall be an exciting day. For female Whovians like myself, the day is doubly so. It’s not just a new Doctor, it’s a Doctor that looks like me.  In our era where women are rediscovering their voice and their agency, it couldn’t be a better time for the TARDIS to get its own facelift.

As the BBC show pauses to take stock of its new future, so does Titan Comics’s Doctor Who series, relaunching with new stories from both Doctors new and old. The introduction that matters most is that of the one with the number of thirteen, and the first of the Thirteenth Doctor comics takes a breather in this zero issue to revisit 55 years of history to understand what comes next.

This zero issue is not the story of the Thirteenth Doctor, but rather the story of the twelve (which may be a bit inaccurate with the inclusion of John Hurt’s War Doctor) in self-contained adventures, some with a lesson for the next TARDIS inhabitant, others simply for fun and action. The stories themselves are only loosely connected, with endings giving a flow from story to story. This allows a reader to skip back and forth to favorites or read from cover to cover in installments. The connection to all of these is that of the Thirteenth Doctor, viewing her history during what appears to be one very long regeneration.

The First Doctor stresses the importance of change and renewal as a part of life (perhaps predicting words he’ll share five regenerations later: “Change my dear, and not a moment too soon.”) The Fourth Doctor and Romana teach us the importance of being prepared, using a chance time machine trip to New York to inform a later trip in 1985 to find a psychic sales voucher. David Tennant’s Tenth Doctor finds himself being treated by a (gasp!) woman doctor, an abnormality in 19th century England but commonplace today – – another woman Doctor paving the way.

Each script is its own original story not connected to the preceding comics or even the TV series. My love-hate relationship with Doctor Who comics comes from my unique gift of jumping in to series at the wrong time, so to have a story where I can be on the same playing field as a longtime comic reader is enough for me to give the comics a try one more time, from a proper starting point as opposed to one I make on my own.

Is this an introduction for new fans to the franchise, as the solicit proclaims? I’m not so sure. It’s not something I would give to someone who has never watched Doctor Who before, or at least without instruction to surf Wikipedia entries first. I do find it a good introduction for newbies to Doctor Who comics, like myself. There’s a level of assumption of familiarity with the franchise in the comics, and those completely new to Who will most likely be lost without some basic pre-requisites.

The companions and supporting cast will be familiar to most Doctor Who fans: Sarah Jane Smith and the Third Doctor, Peri with Colin Baker’s Sixth Doctor, Bill and Peter Capaldi’s Twelfth Doctor tripping the light fantastic. Beloved supporting cast members like River Song and Jack Harkness provide an extra level of appreciation for longtime Whovians, along with Easter eggs that lend another level of charm: the sonic sunglasses, jelly babies, “Hello Sweetie,” “Allons-y!” and fish fingers and custard. If there is any drawback in characterization, it’s the choice on some stories (particularly the 2005 revival-era Doctors) not to use TV companions. For some Doctors (the Eighth, the War Doctor), this makes sense, for their television time was fleeting. But not to have Amy Pond return for one more adventure with her daughter River Song and her beloved Raggedy Man just doesn’t sit right with me.

The artistic lineup on this introduction is stellar, with each story having its own look and feel in art. It’s a mix of individual style and personality of each Doctor that works many times, but not in others. Pasquale Qualano and Giorgia Sposito keep their Doctors quite photorealistic but not overly so, capturing those most remembered physical aspects: the Ninth Doctor’s prominent ears, the Twelfth Doctor’s wavy grey hair and tall lanky build, the Fifth Doctor’s boyish youth. Brian Williamson has given his Third Doctor a strong jaw and weathered-worn face with minimum pencils and inks, letting Dijjo Lima’s colors tell the story of age and experience – – a tactic you also see in Lima’s coloring on the War Doctor installment. Not everyone hits a home run with their work, though: there’s an overly soft and pastel look to the First Doctor stories that doesn’t seem to fit with the tone of the William Hartnell era, and Arianna Florean’s Fourth Doctor artwork leans more toward cartoonish and manga styles, perhaps to play up the carefree attitude of the Tom Baker era. These aren’t complete detractors to enjoying story, just odd choices.

But what of number Thirteen? This is the kickoff to her story; where is she within these pages? Claudia Ianniciello provides us with yet another introduction to our suspenders and high-water pants wearing Gallifreyian. In her first appearance in this year’s Free Comic Book Day offering, the depiction tended towards the cartoonish, much like the Fourth Doctor installment here. The pages where she is the star, particularly two full page panels at the end, opt for intense photorealism but with the look of a painting. It’s the painterly details that keep this very detailed, very realistic pencils and inks from being overly so, giving our Doctor the feminine side that is as much a part of her as her costume – – but without ramming her gender in your face. These are recreations of the final scenes of the regeneration from the 2017 Christmas special, and they’re rendered accurately and beautifully.

A final word of praise is due to the lettering team of Sarah Jacobs and John Roshell who have the herculean task of lettering these very individual stories.  They do quite well in blending their letter work well into each story. We in the comics industry do not give our letterers as much praise as they deserve. When a small team like this is responsible for such a gargantuan artistic effort, one where they not only meet but exceed expectations, all accolades are due to them.

I’ll leave the final word to Thirteen herself, for it sums up the new Whovian era better than any of my own words ever could: “I don’t know what the future holds, but I’ll tell you something . . . it’s going to be amazing.” It’s a new dawn, it’s new Gallifreyan day, and I’m certainly feeling good.

Final Verdict: 8.5– A fine introduction for Doctor Who fans of any aspect of the franchise, especially for those who want to try the comics but unsure of where to start. We’re all here to join this amazing ride with you, Jodie.  Long may you reign.