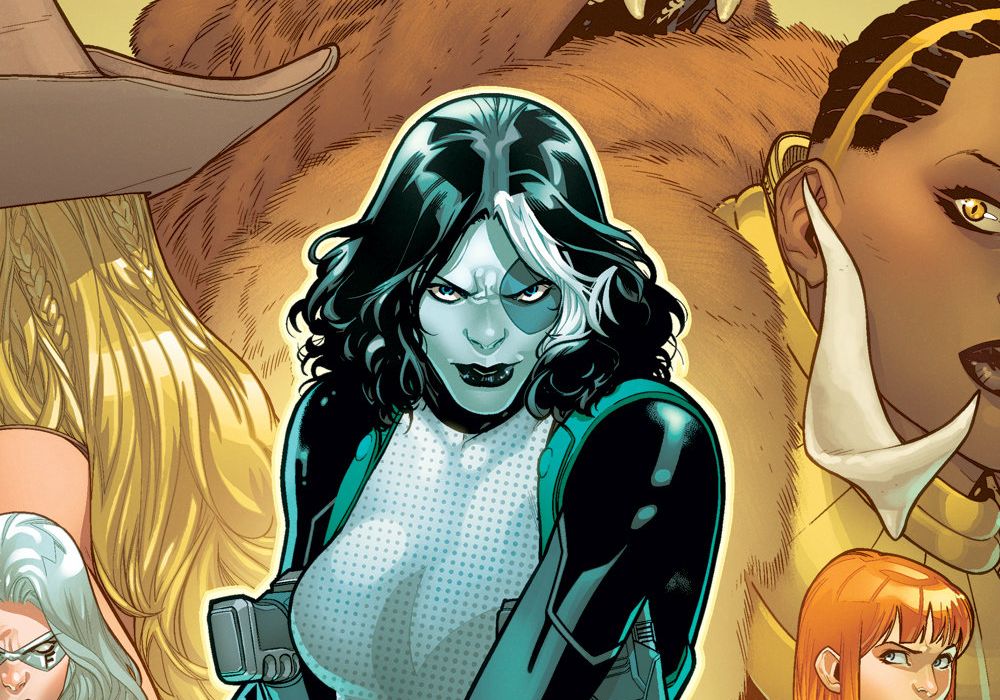 “Domino: Hotshots” brings together a somewhat random assortment of Marvel heroines under the pen of superstar writer Gail Simone. While she may have made her name on DC’s iconic “Birds of Prey”, it seems unlikely that this particular superteam will enjoy such a lasting legacy. 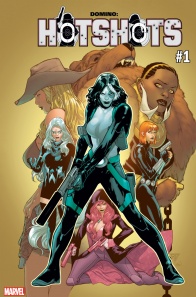 Cover by R. B. Silva

Written by Gail Simone
Illustrated by David Baldeón
Colored by Jim Charalampidis
Lettered by VC’s Clayton Cowles
BULLY, BRAWLER, MERCENARY, SPIES: THE MARVEL UNIVERSE’S HOTTEST TEAM IS HERE! Domino and her pals Outlaw and Diamondback are caught between warring nations! And it’ll take a whole new crew of international women of mystery to sort it out! Featuring the titanic talents of Gail Simone (Birds of Prey) and David Baldeón (SPIRITS OF VENGEANCE)!

Who knew that dying could be such a great career move? Since popping her clogs at the end of “Secret Empire,” Black Widow has received both an edgy new solo series and a pivotal role on Marvel’s latest super-team. As the title would suggest, Domino is the one calling the shots in this new series, but Natasha gets reverential treatment nonetheless as a veteran of the Marvel Universe.

“Domino: Hotshots” opens with a meteor crashing cinematically in a harsh stretch of Antarctic coastline. As you might expect, this is no harmless chunk of space debris, but a mysterious source of great cosmic power. Naturally, every government on the planet is clamoring for the secrets it can reveal, resulting in a remarkably international team of heroes pooling their efforts to secure it. Black Widow, White Fox, and Atlas Bear represent Russia, South Korea, and Wakanda respectively, while Diamondback and Outlaw return as holdovers from Simone’s previous “Domino” series.

Sadly, this team dynamic never really hits a stride. The dialogue shifts somewhat jarringly between light-hearted banter and stern declarations of distrust, leaving the book floating somewhere between cheesy fantasy B-movie and genuine spy thriller. By refusing to pick a lane, “Domino: Hotshots” doesn’t really succeed in either capacity. The lack of team bonding seems deliberately poised to draw attention to the friendship of her core trio of characters, but it’s a decision that’s ultimately unfulfilling for anyone who didn’t catch that earlier run. Both White Fox and Atlas Bear are left particularly underwritten, with only a handful of lines each and little identity beyond their striking costume design. The only attempt at showing any bond between Domino and the new team members is her excessive fangirling over Black Widow. Sigh.

A trend that seems to have gotten only more prevalent in recent years is making superheroes obsessive fans of their fictional peers. While endearing when used sparingly and appropriately, more often than not it’s a tiresome device implemented for a lazy character beat or joke. “Domino: Hotshots” features a case of the latter and this tendency to overcompensate continually rears its head throughout the book. Most notably, the abundance of lame quips in Simone’s script effectively undermines the effortlessly cool depictions of the team by illustrator David Baldeón and colorist Jim Charalampidis.

Fortunately, its visual style is where “Domino: Hotshots” recovers some good favor. The opening evokes John Carpenter’s The Thing with both its desolate snowy setting and wide-angle panels. From there, Baldeón and Charalampidis effortlessly transition into an opulent cafe in central Paris, before heading back to the more foreboding site of a deserted Argentinian cemetery. Each distinct environment is detailed and beautifully captured, while the climactic final battle takes yet another visual twist. References by the antagonist to an entity known as “the creator” are paired with a sudden explosion of Jack Kirby-esque design, resulting in a tasteful homage that fits seamlessly with the book’s narrative. Letterer Clayton Cowles is a vital ingredient here, gleefully bringing the likes of “SHOOM” and “ZZURG” back into comic book lexicon.

There’s palpable energy flowing through the book’s final pages as the team throws all their might against a formidable foe. It’s a sequence that in just two pages conveys the ferocity of these characters more effectively than any interaction in the script. One particularly strong page that shows the entire team attacking at once is genuinely comparable to the now-iconic shot in Joss Whedon’s first Avengers movie. Both serve as a powerful statement regarding the viability of their respective superteams.

While the dialogue in “Domino: Hotshots” leaves something to be desired, Simone does succeed in creating a central mystery that demands answers. In her long writing career, she has clearly mastered the art of feeding enough information to keep the interest of the reader, without giving the game away entirely. It’s the compelling nature of this mystery that makes the final page reveal a tad deflating, appearing so out of left field that it feels shoehorned in to drive sales of the next issue.

While not without its merits, the fact remains that “Domino: Hotshots” is a disappointing read, largely due to its clumsy and arguably outright desperate dialogue. Comic books with female leads are no longer a rarity at neither the Big Two nor independent publishers, which has brought more nuanced and thoughtful depictions of new and previously sidelined characters. In the face of this, the obnoxious quips and thin characterization here feels horribly dated, which is a big problem for a book that presents its all-female line-up as a primary selling point.

Certainly, this issue feels tailor-made for people who followed Simone’s previous run on “Domino” in its entirety. While you can easily follow the plotting of this issue without any prior knowledge, it feels like there’s an awful lot missing without the context of these character’s past interactions. Rather than re-establish those bonds for new readers, “Domino: Hot Shots” instead opts to be an exclusive club. If you aren’t a previous member, there’s simply no point in turning up.

Final Verdict: 5.5 – “Domino: Hotshots” might provide some fun for fans of Simone’s previous series, but offers little for new readers aside from some gorgeous artwork.