At last, the Doom Patrol confront the enemy behind the curtain of reality. If you’ve been confused about the goings on in Gerard Way’s book like a normal human being, fear not. This issue contains answers, thrills, and enough meta-narrative to quell the hearts of any fan of the wild and weird. 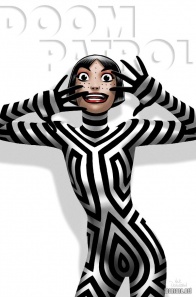 Doom Patrol fights Dada and someone becomes a mama. How did life and death become so intertwined? It’s Robotman versus a classic foe as Casey and Terry take us into a whole new territory we’ve never seen before. But could this newness also just be a whole lot of nothing?

Gerard Way of My Chemical Romance has brought over his trademark sense of totally outlandish sensibilities to comics and it’s been gloriously bizarre in “Doom Patrol.” Sometimes the pacing is all over the place, but it’s with issues like this that we can be satisfied at the tying up of loose ends. And with Way behind the typewriter, the reveals are mind-bogglingly entertaining. In fact, this may be the most important issue since the very first of this Young Animal incarnation.

Most of #11 is extended exposition, but it’s completely necessary to make some semblance of sense out of this narrative. Turns out (and buckle in) Haxxalon, the mysterious entity with a WITHHELD DUE TO COPYRIGHT across him, was a forgotten superhero who serves television addicted gods. But he’s ready to end it all because he’s bored. We’ve been waiting to see the origins of this entity and the events surrounding him since the beginning of this story, but the reveal is better than I could have hoped. On the one hand, Haxxalon’s story is a genuinely fascinating one that wrings empathy from us, but Way also upends our expectations regarding tropes and clichés.

We learn about the fates of many other characters and finally get explanations for events found back in #1. These developments are executed with total verve, slamming you with mind-bursting twists after another before you barely have time to process them. The events are totally absurd and could be total schlock in another writer’s hands, but Way knows what he’s doing and thrives on the madness of it all. In many ways, he’s the best writer we could have hoped for to fill Grant Morrison’s shoes, because he understands the Doom Patrol team is best when they’re fulfilling their potential to be the strangest band of beings to fight the strangest threats. This issue and series may be weird for weird’s sake, but what’s wrong with that? Way proves once again he can play a long game and make it work, using the stretched plotting to continue to lay groundwork for upcoming issues as he goes, even if at times it feels like the series is spinning out of control.

This issue is a perfect illustration of how imaginative and vast the world of Doom Patrol can be. Since the rules of logic are so loose and the storytelling so bold, it feels as if, quite literally, anything can happen—but the book is grounded with stellar characters and some of the best comic art on the shelves.

What sets apart Way’s take of this team is his compassion for the characters. Not to say that Morrison had none, but Way takes characters who were almost frightening in their bizarre qualities and pens them as if they’d be fun people to hang out with. At the same time, he never loses sight of how truly imaginative and bonkers this title can and should be. Jane came off as truly deranged in Morrison’s take, especially with the jagged art by Richard Case, but now she’s one of the most docile and lovable characters who’s been able to take more control over her powers. Despite the sizable cast, each character has a distinct voice, and their dialogue can be downright hilarious. Even though he doesn’t show up until later, Mr. Nobody’s (one of Morrison’s most artsy creations) anarchic disposition is not only amusing but ominous in his chaotic attitude.

I’ve never been more impressed by Nick Derington’s art. His unpretentiously cartoonish style does not lack in fantastic detail, and he has the eye of a master in terms of composition. Despite the relatively simplistic faces, there’s a wealth of expression to them that brings the cast to life. It’s always hard to discern how much the writer and artist collaborate on the pacing, but it’s stellar nonetheless, impacting every page and scene with utmost zest. On top of that, Derington shows us an impressive scope and control over environments. Hexxalon’s appropriated throne room smacks of majesty and grandeur, while Jane’s mind-scape (represented by a subway train) is dingy and claustrophobic.

The ending is a melancholic one, leaving our characters in a suspended state of hope and resignation. The Doom Patrol heads off, saved by Sam, Val, and Lucius—but the Brotherhood of Dada is broken apart, Mr. Nobody and his daughter stuck in limbo. We’ve reached the point where the cast have faced their fears and find themselves united and stronger than ever. This sentiment is mirrored in part by Casey’s final monologue: “There’s nothing safe about loving people…but that doesn’t mean I’ll stop trying.”

If I had one complaint, if you could even call it that, it’d be that certain characters like Casey Brink don’t have much to do. But it’s not as if the series has neglected her in the past, and she’s not supposed to be the focus in this specific issue. In fact, if she was, it might be an even bigger problem trying to shoehorn her in.

Final Verdict: 9.0 – Gerard Way and company brilliantly tie up loose ends while setting the stage for more insanity to come. “Doom Patrol” is an unadulterated joy to read.

Alex Curtis presides in Connecticut. Feel free to contact him at https://alexcurtisediting.wixsite.com/alexcurtisblog