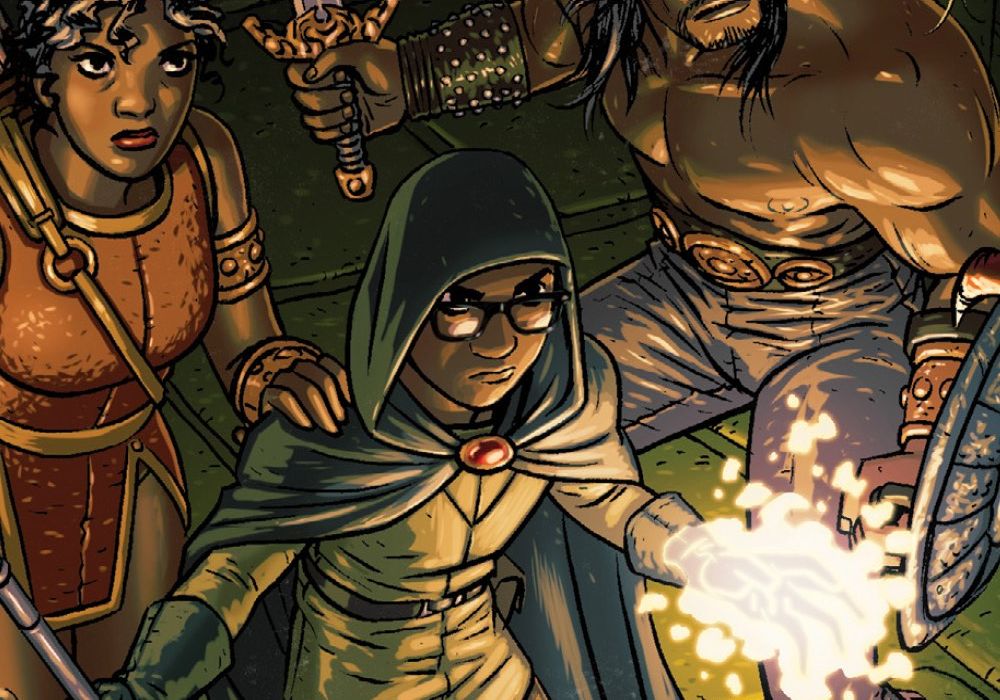 After three years of comics pushing the boundaries of what DC is currently publishing, Young Animal is coming to an end with “Doom Patrol” #12. The ambitious title’s tenous shipping schedule is infamous with 12-issues dispersed across three years. Readers are at the point where the dense material in each chapter means they have forgotten what was published in previous issues of the series. After so many delays and a different artist joining the title, what can the final chapter of “Doom Patrol” do but disappoint readers who have waited months for a new installment by the imaginative take on DC’s strangest superhero team? 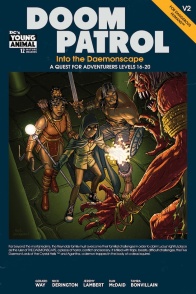 A quest for adventurers level 16-20! Far beyond the mortal realms, the Reynolds family must overcome their familial challenges in order to claim Lucius’ rightful place as the ruler of the Daemonscape, a place of horror, conflict and sorcery. It is filled with traps, beasts, difficult challenges, the Five Daemon-Lords of the Crystal Hells and Agantha, a demon trapped in the body of a dead squirrel.

Gerard Way and Jeremy Lambert’s script for “Doom Patrol” #12 is as ambitious and impressive as Dan McDaid and Nick Derington’s art. The final chapter of “Doom Patrol” sets the newly reunited Reynolds family on an adventure in the Daemonscape which as the solicit teases is a quest for adventurers level 16-20. The issue bears an incredibly light, endearing tone that will no doubt strike some emotion in anyone who has been following the series up to this point. However, the book carries some curious baggage that is left unresolved which will leave readers scratching their heads with curiosity and saying; where is the Doom Patrol?

The last time readers saw the Doom Patrol in the present day was at the end of the massive ‘Milk Wars’ crossover. Only seeing the titular characters in one panel here at the end of the series is a huge disappointment. The exact nature of the cancelation behind “Doom Patrol” is still shrouded in mystery, and at some point, with an upcoming television series readers can’t help but speculate that the team will be back soon. Also, the superhero team’s appearance in the final chapter of the series was both tasteful and intriguing as readers should expect from the series to date.

Artist Dan McDaid’s unwieldy, eclectic pencils are an asset to the series and an impressive new direction for “Doom Patrol.” Usual artist Nick Derington’s layouts add a more cohesive direction to the book. The experimental panel bleeds and page composition are all here. This time, instead of the polished aesthetic of Derington, readers get the kinetic, fluid movement of McDaid’s illustrations. The fantasy approach to the world and direction that McDaid builds within the confines of a single issue is gorgeous and vibrant. Tamra Bonvillain’s colors also brought out a more varied and vibrant look to a world that could have been dull.

McDaid has a great visceral energy and poses his characters in a manner that makes them feel alive. McDaid’s work is full of experimental panels and is loaded with detail coming right off of the page. The issue is a standard length of a comic but carries lots of different scenarios. Way and Lambert’s script was adapted carefully through the art team of the series to not overstuff the issue.

Way and Lambert’s script is paced just right, hitting on a lot of emotional beats with the Reynolds’s family. When a character gets injured later on in the story, there was a sense of stakes in the script making me believe they were in mortal danger. The final confrontation of the issue is also a harrowing battle with strong choreography and an interesting emotional hook for readers to get invested in.

The end of the story reveals where the comic is set which is definitely a disappointment to individuals hoping that the comic would advance the “Doom Patrol” story forward. Thankfully, Way and Lambert’s great Reynolds family reveal towards the end of the issue and brisk, easy-breezy dialogue makes up for it. The story also carries a final cliffhanger that will leave readers wanting more while keeping them curious. Knowing the Reynolds family will have more adventures past this important point in the story is an endearing note for “Doom Patrol” and Young Animal as a whole to end on.

“Doom Patrol” #12 is a curious final chapter into the series as a whole and for the Young Animal line of comics. While the script and artwork are both exceptional, the final chapter isn’t going to offer readers everything they want out of a series finale. However, the sheer audacity of giving something entirely different than what we expect is a great way to sum up the three-years of comics from Young Animal. While the line doesn’t always give us what we want or expect, it does a great job challenging expectations and delivering a solid baseline level of quality. Way and Lambert’s script and Derington and McDaid’s art are both at the top of their craft in this finale.

Final Verdict: 7.7 – “Doom Patrol” #12 is a touching final chapter to the series that may not deliver everything fans were looking for.