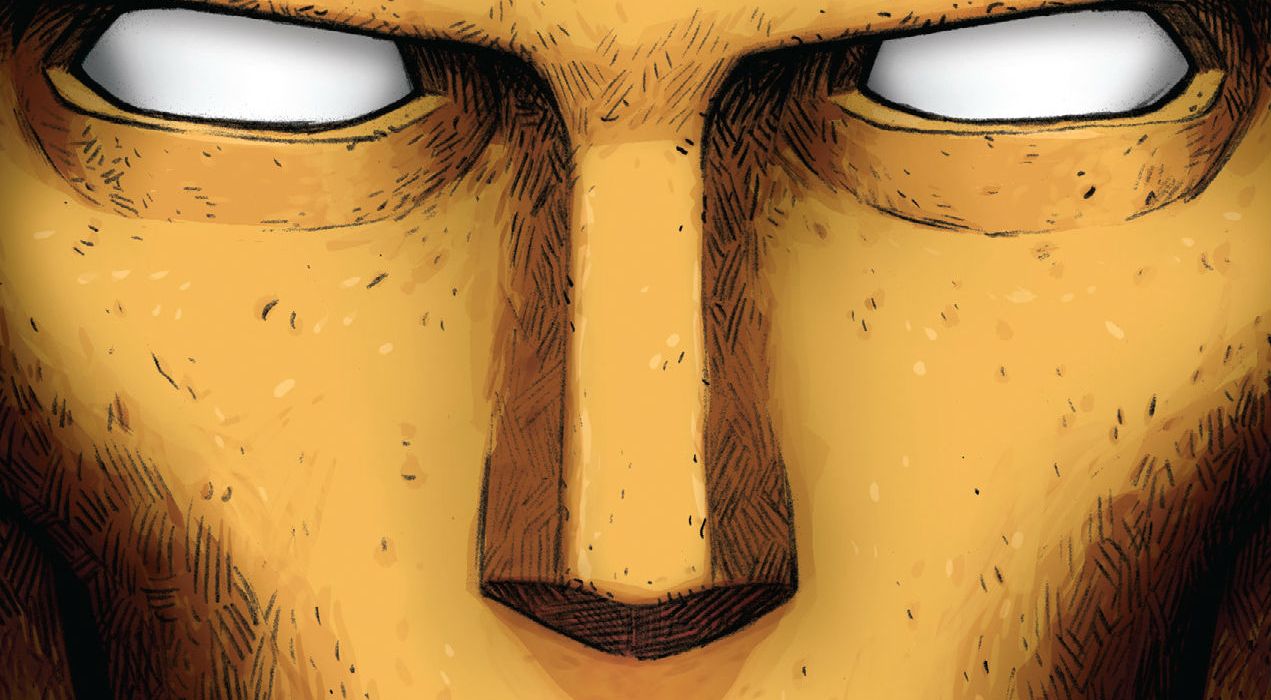 “Doom Patrol” is finally getting ready to close out the series debut arc with issue #5. Seeing the first few chapters naturally come together and progress towards closing out the big debut arc has been an absolute joy thus far, but this series has an awful lot of plot threads and concepts to juggle. With so much plot, character and quirk meshing together does “Doom Patrol” #5 even have the chance to be somewhat coherent while the book continues to push the narrative forward? 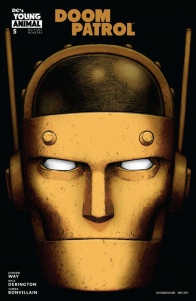 The team is back together at last, though why they are back together remains an unanswered riddle. After the mind- blowing revelations of the previous issues, Casey Brinke has to figure out what this all means going forward. Or maybe it’s just the end of everything after all? Plus, Robotman punches stuff!

“Doom Patrol” #5 does not let up in its breakneck pace from the very first word. This issue in particular nails a variety of character beats ranging from surreal to hilarious all in the scope of one issue. Writer Gerard Way has mentioned his love of author Grant Morrison’s “Doom Patrol” run and from the very first issue of this series, the writer has been committed to honoring what came before while still pushing the source material to a brand new direction with the help of artist Nick Derington and the bold colors from Tamra Bonvillain and letters from Todd Klein.

This issue has the impossible job of tying up some loose threads together from a few different characters and acclimating readers to the villains of the series. Earlier this year I’ve read a few debuts of villains who were supposed to be funny but weren’t, that’s not a problem here as the bad guys always have interesting and poignant things to say. The villains don’t just bring the jokes here, but they still pose a physically imposing presence while instilling the fact that they are intelligent creatures, capable of understanding the complicated reality that this book operates within.

It took about five issues of this series, but Way has assembled each member of his “Doom Patrol” and welcomes them into a really strange conflict by the end of this issue. With so many characters and different dimensions, Way is fulfilling the impossible while still not boiling characters down to their individual traits. Each member of this team has at least gotten one chance to shine and Way continues to spread the material around across the different heroes while keeping a nice emphasis on lead character Casey Brinke. This issue also continues to introduce some surprise motivations and a last page that brings a very welcomed addition to the book.

Again, if Way had just been trying to follow Grant Morrison’s tenure on “Doom Patrol” up with the same style and formula this series wouldn’t feel so novel or unique as something that could only happen within Young Animal. This issue continues to cement the fact that this series has really been able to find a place in the larger “Doom Patrol” canon. This incarnation of the book could potentially be something talked about amongst comics fans for years to come.

Derington’s pencils have such a strong, infectious burst of energy that really makes the writing evoke such a humorous tone. Luckily, Derington is able to hone the drama out of the more dramatic elements of this issue as well. Seeing the artist finally get a chance to draw a few volatile baddies proves that he can bring some elements of nastiness to the psychedelically enhanced work seen throughout past issues. Derington stuffs this issue with information but still has a strong sense of storytelling. The full team wrapped a nice big bow at the end of this package with the cliffhanger. While this issue is stuffed with information, Derington paces the page and dialogue just right.

There’s an absurd amount of information stuffed in Doom Patrol #5, but its Way’s commitment to his absurd cast that’s likely going to keep fans coming back to this series issue-after-issue. While the plot may be lacking in just tiny amount of forward momentum by this particular issue’s conclusion, Way’s characterization of heroes old and new combined with visceral look of Derington’s work make this issue stand amongst it contemporaries.

Eventually, character that aren’t Casey are going to need more time in the spotlight, but it’s entirely likely that in follow-up issues the expanded cast will also get their moments in the sun. There are a couple of huge moments that feature really strange diversions that fall nicely in line with the main tone of the story. Doom Patrol still has loads of surprises in-store for patient fans able to come back month after month to see what exactly is new with these characters.

Final Verdict: 8.0 – Doom Patrol #5 continues the wonder and charm this series evoked since the first issue!