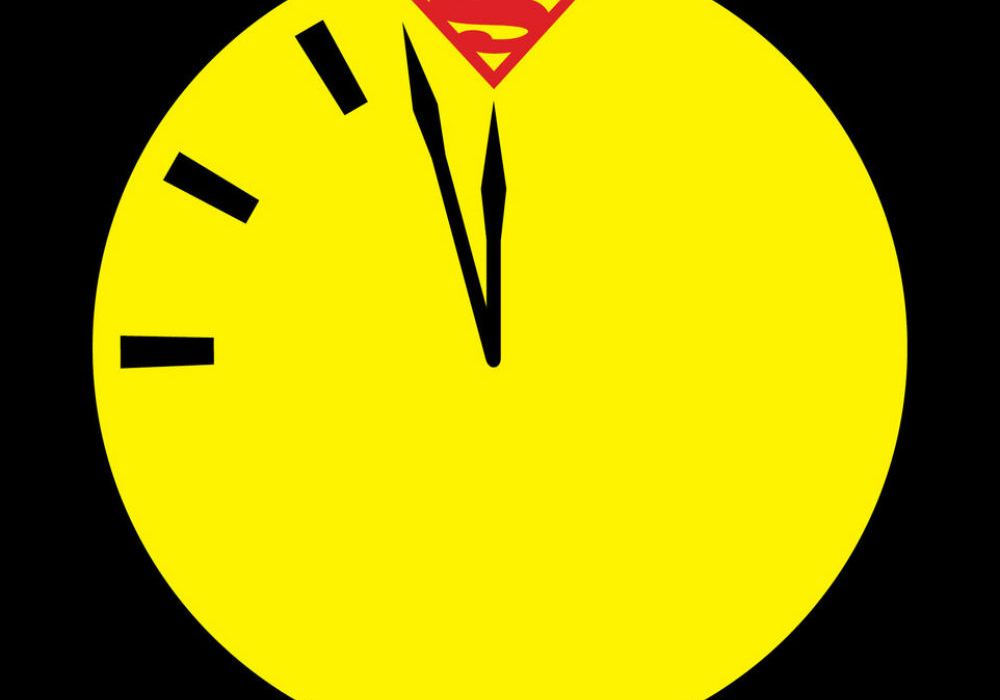 There are some things in life that should never be touched: it’s never a good idea to call up your ex, the wedding cake in the freezer is never going to have the same depth of flavor it did on that happy day, your favorite book from childhood won’t thrill you the same way on a re-read in your 30s. And yet, we are constantly doing this, revisiting the past and hoping for a result that is probably never going to satisfy.

That is the story of “Doomsday Clock,” and DC’s attempt to bring some of that “Watchmen” magic back in 2017. “Before Watchmen” didn’t cut it, Zach Snyder’s Watchmen was a pale facsimile, but maybe Geoff Johns and Gary Frank can find that spark, or so the higher ups at Warner Bros seem to think.

Sadly, there isn’t much magic left in this world, and “Doomsday Clock,” while not an ineffective comic in a number of ways, just reads like a distant echo, barely sounding at all like the original, glorious, note. 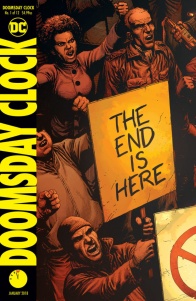 DC Comics presents to you a 12-issue maxiseries from the critically acclaimed team of writer Geoff Johns, artist Gary Frank and colorist Brad Anderson. You are not prepared for what lies ahead within these pages, good readers.

Let me preface this review by saying that, while I greatly enjoy “Watchmen,” I do not believe that it is some magical text that should operate under a different set of rules than other comics. I also want to acknowledge that DC’s treatment of Alan Moore (and, to a lesser extent, Dave Gibbons) is problematic, if not exacerbated by Moore’s position. In fact, just about everything about “Doomsday Clock” feels like it probably shouldn’t have happened. But it has, and we’re going to deal with that.

This first issue is very much a sequel to “Watchmen,” perhaps more so than anyone predicted this series would be. While pitched as “Watchmen meets the DC Universe,” so far we’ve only seen four pages of the DC Universe, and there is no clear impact from the Moore/Gibbons characters yet.

The story picks up seven years after the end of “Watchmen,” after the public has learned about Adrian Veidt’s plan to save the world through fear and destruction, and it won’t stand for it. There is chaos in the streets, and the world is somehow even closer to nuclear war than it was before Veidt sent a giant exploding squid to New York City. Frank’s art instantly sets a tone of teetering on the brink of insanity. People’s eyes are bulging from their heads, mouths open to scream, with Brad Anderson using a red/pink hue to give most of the people/surroundings a hell-ish, ominous glow to them.

When not dealing directly with the characters from “Watchmen,” Frank’s style fits the powder keg tone. He is not a Gibbons clone by any stretch, but there is some shared DNA there. What hurts the book, visually, is that there are lots of moments where Frank is supposed to do ‘a Gibbons’ and it just doesn’t land. There’s a scene where the Mime (more on him in a bit) needs to get ‘his weapons’ from a locker, and he reaches into an empty locker and puts on a fake utility belt. It’s a gag – he’s a mime! – and Frank illustrates it competently. But this scene, in particular, would have shone by Gibbons, where it just merely lands from Frank. Gibbons is a master at crafting every panel to not just tell one story, but to do more than any panel should reasonably be allowed to do. Seriously, go back and read “Watchmen,” and marvel at how much information Gibbons packs into every panel.

And that is this issue’s big problem: it suffers because it is set up so absolutely as a “Watchmen” sequel, not just in terms of plot, but also in terms of construction, that it doesn’t allow Johns and Frank to do what they do best. At times, it seems they are simply aping Moore and Gibbons, and that rings hollow. At other times, you see them trying to exert their own influence, and the tone slips from what the rest of the book is trying to accomplish. It’s an unwinnable battle, and one that doesn’t seem likely to resolve itself as long as the “Watchmen” characters are at the forefront.

Johns works hard to introduce a new Rorschach – identified as a person of color – as well as two new characters, the Marionette and the Mime, analogues of Punch and Jewelee, two more former Charlton characters (like the Question, the Blue Beetle, Captain Atom, etc) adapted for this story. This is all interesting from a metatextual level, even if their on-page actions aren’t quite as interesting. Marionette – who insists Mime tags along – is ‘needed’ to help the cancer-riddled Veidt and Nu-Rorschach to find Dr. Manhattan and have him save the world.

This whole idea of ‘let’s get the band back together’ doesn’t really work for a simple reason: theses characters were never friends and never particularly close. Veidt refers to Manhattan as ‘Jon,’ which seems absurd. This is supposed to imply a closeness that frankly was never there. While Veidt and Manhattan may have understood each other, to imply anything more than that seems like a misreading of the original text.

It is interesting that Johns decided to let Dan and Laurie stay retired. He’s giving them the ending that they earned through “Watchmen” – why does no one else get that same treatment?

Their exclusion points, to me, to a problem. They are the emotional core of “Watchmen,” the antidote to the cold Manhattan, the pure intellect of Veidt, and the monstrous id of Rorschach. By removing them from the story, and leaving just the characters that have shed their humanity, the story runs the risk of losing its emotional tether. Now, this is a new Rorschach, so perhaps he will serve a different purpose, but this still seems like DC learning the wrong lesson from “Watchmen” and fetishizing the parts of the book that were supposed to be cautionary.

One quick note on the new Rorschach. The two most prominent people of color in the original “Watchmen” are Bernard, the kid reading “The Black Freighter” at the newsstand, and Dr. Malcolm Long, the prison psychiatrist who attempts to treat Rorscach. I think most folks presume that this new Rorschach is Bernard and, physically, that makes the most sense. Long is an older, burlier man, but the way that Rorschach speaks seems like it could only be possible if he heard the original Rorscach speak, which makes Long a more likely candidate. I still think it is Bernard, but Long is an interesting possibility.

Throughout the entire “Watchmen” sequence, Johns and Frank walk this line of creating a ‘good’ comic while telling a story that is fundamentally problematic and handcuffing to them as creators. It is only through the Superman 4-page sequence that ends the issue that these creators get to really stretch their muscles. This doesn’t feel like them aping anyone else, but rather feels like the start of a really great Johns/Frank comic. In fact, if this issue’s order was reversed, with the Superman story opening the book, ending with the realization that Superman just had his first nightmare, and then fed back into the “Watchmen” world, it would have worked far better for me. The world of Rorschach and Veidt would be a nightmare for Clark, and even though we see that this isn’t his actual nightmare – that is reliving the death of his parents – it would be a nice commentary to kick off the issue. Instead, the way the book is structured, this acts as the little coda of hope, instead of the opening salvo of something really special.

Whether the rest of the series maintains a similar balance of Superman and “Watchmen” remains to be seen – and I doubt it does – but the Superman pages seemed to imply that something was wrong with time/the world, a thought echoed all throughout DC’s ‘Rebirth’ comics at various times. That is a story I can get behind – Dr. Manhattan, somehow, has messed with the fabric of the DC Universe – far more than ‘what happened 5 years after Rorschach’s death.’

And so, while the issue was well constructed and executed, it can’t help but feel hollow. The 9 panel grids, the end quote, it all is meant to transplant us back to 1985 and reading “Watchmen” for the first time. But that’s not what we want or need – we want a good comic that tells a new story, and this book doesn’t deliver that most important element. That isn’t to say that the series will be a failure, but the more it sticks to this formula, the more likely that appears.

Final Verdict: 5.5 – A flawed book that traffics mostly in imitation and nostalgia.