“Doomsday Clock” is now after its halfway mark and this issue could not be more representative of that. While it still retains its core structure, that of the seminal “Watchmen” series, Johns and Frank seem to intentionally allow new elements in, almost as if a more traditional comic book narrative pervades the “Watchmen-style.” By doing that, and by including some complex reveals, this might be it’s strongest issue yet. Mild Spoilers below, given some reveals that are too integral to the story. 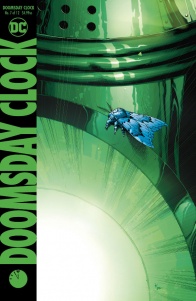 The critically acclaimed team of writer Geoff Johns and artist Gary Frank continue the groundbreaking miniseries bringing the world of WATCHMEN to DC. In this chapter, the truth behind Dr. Manhattan’s curiosity with the DC Universe is revealed as the planet teeters on the edge of the Super-War.

“Doomsday Clock” #7 can be roughly divided in three segments, the first actually answering long-lingering questions about the DC universe after ‘Flashpoint,’ the second reuniting most of the series characters into one broader reunion and the third teasing what the true scope of the series and final act will be. This pacing, unto itself, is already a departure of what had been seen on past entries of this series, with usually one theme or topic permeating an entire issue. While a departure that may be frowned upon by “Watchmen” purists, it actually does the story justice and flair. Justice, as its focus since the original conception was to show an answer by superhero comics to the post-Watchmen story-telling style. Flair, as it immediately injects “Doomsday Clock” with a well-deserved dose of forward momentum and unpredictability.

In terms of visual storytelling, “Doomsday Clock” seems still bound by the panel-intensive layout that has been implemented since the first issue. Series creators Johns and Frank have always been clear that they wanted to play by the “Watchmen book of rules,” and they have certainly obliged to that goal until now. This is not a negative by any means: it was a risk worth taking, especially on the hands of an artist so complete as Gary Frank.

There is a lot to appreciate on every page and the level of detail that Frank infuses on every panel is astounding. It is almost as if each panel is a diminute splash page of its own, if readers were to zoom in close enough. For an issue with so many reveals, the most resonating aspect of that are character expressions: “Doomsday Clock” #7 presents the first encounter between many of the series’s staples, and their expression of surprise, fear and lunacy (yes, in the case of the Joker) are a wonder to look at. In one moment in particular, when hardened criminals view, quite literally, the face of a god, they struggle to maintain their toughness façade.

Frank manages the action also extremely well, even within close quarters. The confrontations between Marionette and the Comedian, as well as Rorschach and the Joker are brutal, gruesome, with nothing being held back visually. It looks real, it seems visceral and it adds to the sense of urgency and consequence this series is aiming for.

The colors by Anderson are also a key component of the entire package and they also align with the gradient transition (here, quite literally) this particular issue is going for. Note how the hues of blue around Doctor Manhattan change from the midpoint to issue’s end, or how the blood splatters coming from the Joker are quite different that when Watchmen characters interact. It could be an accident, but it seems unlikely that such a vivid choice of palette says little on how one universe bleeds into the other.

And what about Johns? On “Doomsday Clock” #7 the writer finally feels free of any structural shackles that were in place on previous entries. Universe and timeline reveals are introduced and explained on its opening page. A major player stands revealed halfway through the issue. Dialogues are clever, quick and meaningful. Characters that had never interacted before ring absolutely true when bumping into one another. The layers of past, present and future tones, as well as on what is actually happening and the analogues on old movie screens come together exceptionally well.

Finally, the impacts hinted by issue’s end, which shall remain unspoiled here. That is the biggest disclaimer of stakes that readers could obtain from a series. It is almost as if the characters on the story know (and they just might) that long-lasting consequences will be in place after all is said and done. After all, it is not often that the seminal superhero deconstruction piece comes headfirst into the seminal superhero construction avatar.

Final Verdict 8.5 – Taking the best elements on the series so far, but elevating it to something more of an homage, with a deep sense of character, art and consequence, “Doomsday Clock” #7 is the best beginning of the end readers could hope for.