As Marvel take the first step into their brave new world, Aaron and Bachalo lead the charge into the great unknown. Diving head-first down the rabbit hole, their opening issue post-Secret Wars is as sumptuous as it is strange. 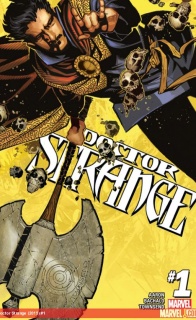 Who do you call when things are coming out of your dreams and trying to kill you? Or when your daughter is cursing in Latin and walking like a spider? Or when your dog keeps screaming at you to strangle your neighbors? Doctor Strange, of course. He’s the only person standing between us and the forces of darkness, but has he been paying his tab?

While “Secret Wars” is still brawling away over on Battleworld, Marvel are casting their glance forward to the future of their most important franchises. In amongst heavy hitters like “All-New, All-Different” Avengers and a pair of “Invicible” and “Amazing” men (Iron and Spider respectively), Dr. Strange might seem like an odd member of the vanguard. While Marvel’s cinematic investment in the Sorcerer Supreme is likely a large part of the decision to put out an updated version of the character, it should still be noted that Strange doesn’t usually fair that well in solo runs. After his initial Gold and Silver age runs, there haven’t been any truly iconic outings for Dr. Strange, and it seemed as though most writers felt that he worked better as part of an ensemble cast, usually being call upon for mystical assistance in times of great crisis. Luckily both for Dr. Strange and for us, Jason Aaron isn’t ‘most’ writers.

Aaron has a pretty impressive resume when it comes to Marvel, but most notable for me is probably his recent run on “Thor: God of Thunder”, which saw him take another character who often falls into one-dimensionality alongside more empathetical heroes, and give him a purpose, a strong voice, and a truly god-level story arc. Although “Dr. Strange” #1 feels tonally very different to Odinson’s last outing, Aaron’s ability to realise what it is about a less connectible character and bring it to the fore-front is clearly working just as well this time around.

After a mericifully brief origin story set over classic panels from Dr. Strange’s past, Issue one jumps straight into the thick of things with an action-packed splash panel that is beautifully busy in a way that only Bachalo can pull off. In stark contrast with Dr. Strange’s severe “Secret Wars” variant, Aaron’s strange is a rakish, experienced adventurer who is confident enough to traverse multiple dimensions but not jaded enough that he doesn’t realise how amazing his life is. Aaron manages a first issue that focusses almost entirely on its protagonist by including a myriad of thought boxes that allow the Dr. to wax lyrical about anything and everything. His usual stiffness is tempered with a wry sense of humour that makes him seem a lot more comfortable astral projecting and battling demons on the ectoplasmic plane than he usually is around the capes and cloaks of more traditional superheroes.

And Bachalo is exactly the right guy to bring these different, chaotic worlds to life. His work is always hugely kinetic, and he has a great aptitude for handling beings who are powerful on a world-altering scale. His recent work on Bendis’ run of “Uncanny X-Men” was superb, and his execution of the Mexican standoff between Cyclops, Magneto, and a newly awoken omega-level mutant all but rippled off the page. Bachalo brings this frantic, canted panel power to “Dr. Strange” #1, but tempers all the astral lightning and transmogrified fire with softer, more subtle touches that truly make this issue feel alive with magic. After Dr. Strange’s initial conflict in the opening pages, his trademark cloak (the Cloak of Levitation, for all you Steven Strange Superfans) snakes its way from round his neck and allows him to walk down it out of a window and onto the street, before tucking itself into a hipster-esque scarf. It’s a small touch, but it helps flesh out Dr. Strange as a man who knows how to live with one foot in each world.

As he walks through suburban New-York he opens his third eye to reveal a plethora of mystical beasties and critters hiding just beyond the veil, and Bachalo offers up a collection of flora and fauna that draw to mind the depths of the ocean, of the rainforest, and of places entirely more otherworldly. It’s a world that feels immediately lived-in, a perfect complement to the soft-reboot of the Marvel U at large.

Aaron and Bachalo have managed to construct pleasingly confusing mystical side to the new Marvel U. Dr. Strange’s world feels self-contained enough that he could have whole adventures without having to call on an Avenger, and yet it is volatile enough that it could easily threaten the world at large with a danger from so far left-field that it might really shake Earth’s Mightiest Heroes. I flew through this issue, a well-paced whistle-stop tour through the new Dr. Strange’s world that feels fresh and familiar at the same time. I hope that Aaron is able to do for the Doc what he did for Thor and carve a truly unique niche in the Marvel universe for this ridiculously powerful and criminally underutilised sorcerer.

Final Verdict: 9.0 – Marvel have brought their A-game out for the relaunch. This is a pretty darn magical first issue.