Confession time, guys. I didn’t like Doctor Strange. I skip it on every MCU rewatch. I mean, there were the one-note villains who just fell flat (Just try to name Mads Mikkelsen’s character off the top of your head). The underdeveloped love interest. The whitewashing controversy surrounding the Ancient One. All of that before we even get to the fact that Strange’s origin is basically Iron Man’s but with sorcery. The only times the magician gets close to being intriguing is when the film actually focuses on the magic. It’s pretty cool seeing how trippy the astral plane is, seeing space bend in the mirror dimension. Truth be told, I think that the Stephen Strange of the comics works best when his book just focuses on the magic as well and leans into the weirdness of it all… 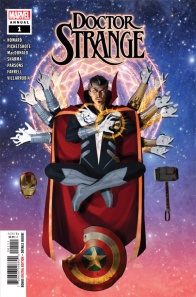 Written by Tini Howard & Pornsak Pichetshote
Illustrated by Andy MacDonald & Lalit Kumar Sharma
Lettered by VC’s Cory Petit
Colored by Tríona Farrell & José Villarrubia
The Sanctum Sanctorum holds all of the bizarre and dark relics that Doctor Strange has accumulated on his journey as the Sorcerer Supreme. But when one of those relics awakens and begins wreaking havoc in the halls, will Doctor Strange be able to wrangle back control…or will his Sanctum be transformed into his own personal hell? Find out in this epic Annual from Tini Howard (THANOS), Pornsak Pitchetshote (INFIDEL), and more!

As it turns out in “Doctor Strange Annual” #1, Halloween is especially weird for the doctor. I don’t know if this has been established in the character’s comics before but it certainly makes perfect sense. Of course, spirits are especially restless on this night and of course the Sanctum Sanctorum would be especially haunted. It starts with a stampede of ghost horses and then there are ghost nuns and…voodoo pumpkins? It’s absolute mayhem, one thing back to back, steadily escalating in unpredictable ways. On the first read, it was a lot to follow and I found myself a little confused here or there. At the same time though, I was more engaged with the Sorcerer Supreme than usual. It’s interesting to see Doctor Strange when he’s ‘on call’, so to speak. The breakfast of pumpkin pancakes the next morning feels well earned, like he just completed a long shift at the hospital.

The biggest strength of “Doctor Strange Annual” #1 is all the different characters. Stephen’s name might be in the title but this book is definitely a team effort. Even the back-up story allows for a different character to have the spotlight. In ‘Treat’ by Pornsak Pichetshote and Lalit Kumar Sharma, a demon attempts to steal a weapon that could kill the Sorcerer Supreme but runs afoul of none other than Wong, Strange’s longtime butler. Wong dispatches the demon with great ease and reveals that the weapon was actually a decoy. In fact, he is the weapon that will destroy Stephen should the need ever arise. It’s an interesting idea, one that adds depth to the character and that writers will hopefully revisit in the future.

In the main story, an entire team of magic-users helps Stephen protect the Sanctum Sanctorum. We have Strange’s sidekick Zelma on standby as well as Agatha Harkness, who I’m pretty sure is a ghost at this point. There’s the Canadian shaman Talisman of Alpha Flight and the Avengers’s very own, Wanda Maximoff. Finally, the team is rounded out by my personal favorite, once Sorcerer Supreme and now Houngan Supreme, Doctor Voodoo. It’s really cool to see these heavyweights of the magical community join forces to combat threats no other hero could.

Writer Tini Howard does a good job of capturing all of their personalities. For example, Agatha might not be warm and friendly with the others but she does show that side when dealing with children. Stephen’s dialed it down since his surgeon days but is still just a bit of a jerk. Once or twice, the magic-users top speaking in long, flowing sentences and curse in frustration at the pandemonium around them. It’s a small joke but I cracked up each time.

I knew that this was going to be a fun team-up when the coven each gave their own intro. It’s probably my favorite moment in the comic because it is perfectly executed, both in script and art. On the story side, it establishes the team’s common purpose but makes it clear that they are all unique. Wanda’s got her chaos magic thing going on, Talisman’s a shaman while Doctor Voodoo has that voodoo that he do (No more puns, I promise).

On the art side, each magicians panel has its own background. Jericho gets a wailing spirit and Wanda gets floating blocks, a callback to the effect her powers had back in “House of M”. It reminded me of the morphing sequences in each season of Power Rangers. The art is solid in the backup as well. There’s the monsters with mouths for eyes, the monkey-demon that splits a man’s face open and climbs out like a snake shedding its skin. Sharma is going for horror in their work and congratulations, I am definitely horrified. This book offers terror and fun so…all in all, a pretty good Halloween.

Final Verdict: 7.0 – “Darkness falls across the land, the midnight hour is close at hand, Creatures crawl in search of blood, To terrorize y’all’s neighborhood…”