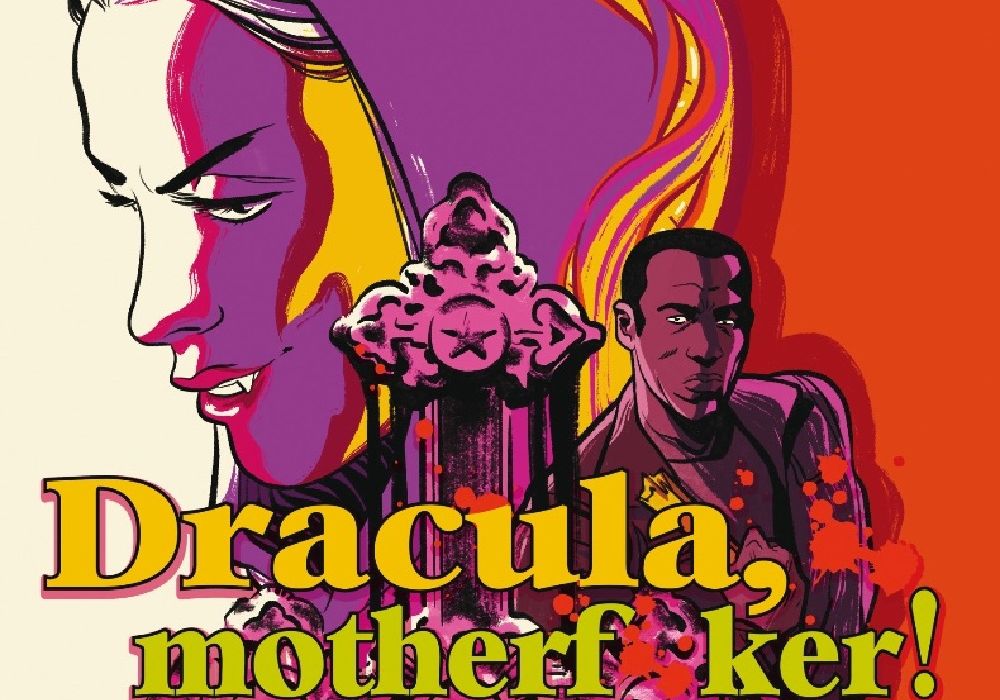 Vampires, and Dracula in particular, go through cycles. We’re seeing a resurgence again after a long fallow period and this means that we get both derivative works and wild and fun takes on the characters (like this one.) So break out your bell bottoms, prepare for paisley, and get ready for everything to be on the verge of a bad trip in “Dracula, Motherf**ker.” 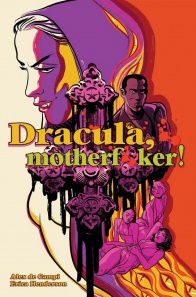 Vienna, 1889: Dracula’s brides nail him to the bottom of his coffin. Los Angeles, 1974: an aging starlet decides to raise the stakes. Crime scene photographer Quincy Harker is the only man who knows it happened, but will anyone believe him before he gets his own chalk outline? And are Dracula’s three brides there to help him…or use him as bait? A pulpy, pulse-pounding graphic novel of California psych-horror from acclaimed creators ALEX DE CAMPI and ERICA HENDERSON.

Alex de Campi knows her shit when it comes to homaging and modernizing the Grindhouse/Exploitation genre. Every page is dripping with a love, and a critique, of the genre, as evidenced by the presence of its hallmark brutality and sensuality while refusing to lean into lurid depictions of sex and violence. Clearly, she is aware of the heavy male gaze of most Exploitation works. Rather than simply inverting the gender roles and continuing to indulge in that luridity, she interrogates it with a new gaze without sacrificing its trappings.

There is nary a naked body to be found, nor any blood larger than a trickle, until the climax of the piece. What blood that is there is of the men, specifically those who prey on women: Dracula and Jack, who early on says to Harker: “You coulda at least pulled her skirt up so we see some leg, Harker. I coulda given double for leg. Triple for boobs.” Harker is not blameless in the narrative, though. His job is inherently exploitative, being a photographer of dead bodies, mainly women, to see as headliners for a voracious public. He is a literal manifestation of the male gaze and his photos reflect this, cutting off the heads of the women he photographs while centering their chests and legs, while the men he photographs get to have faces and are rarely in suggestive, “sexual” poses.

The men are dead people. The women are lifeless objects. At least, until they rise again.

And the narrative punishes Jack, and to some extent Harker, (and Dracula, duh) while reserving a sympathy for Bebe and the unnamed second bride as it builds a work that asks critical questions of “Dracula,” Hollywood, and American society of then and now. Blood tastes disgusting but it keeps you young, and that’s a small discomfort to deal with, yes?

De Campi talks in the back of the book about how Dracula, at least here, should be a faceless monster, because to give it a face is to diminish the monstrousness of the form. De Campi’s lettering reflects the ominousness and ancientness of the monster that is Dracula, striking the right balance between the unobtrusive regular font of the people and the in your face Gutenberg Bible font. The rest is brought to terrifying, beautiful life by Erica Henderson, whose work here is some of the best she’s done, allowing for the narrative to delve deeper into the questions it wants to ask about power and predation.

Were Dracula faced, were he to be a person, one could dismiss Bebe’s continued loyalty as believing the outside to be real while obfuscating the monster inside. Without it, the tragedy becomes more acute as the justifications must be that much more desperate for her to remain. Dracula can grant great boons but the price is high and the debt unending, crushing the desperate, the hopeful, and the greedy alike, though no greed can compare to that of the one benefiting from the work of those he “takes in.”

Why does a creature so old take brides so young indeed?

Up until this point, I’ve been saying that de Campi did this and de Campi did that but Henderson must be credited just as much with crafting and bringing the story and these themes to life and communicating them with vibrancy and horror. I touched on her depiction of Dracula before but it’s worth repeating. 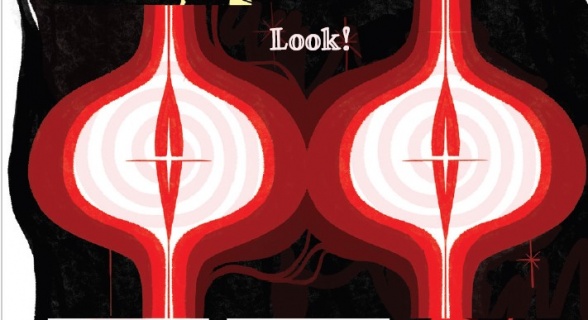 Dracula is horrific but mesmerizing, a creature of red and black and orange and white, with a multitude of eyes and teeth, the only human part being his pale, horrifically real arms. Amorphous, sometimes wolf-like, he flows and slinks in the darkness, between panels and pages, almost regal when in control and sharp and chaotic when not. The way Henderson depicts his hypnotism of Harker is maybe my favorite of the whole piece, and that’s a tough call because that explosion on pages 48-49 is fucking gorgeous.

Henderson’s use of that uniquely 70s style of concentric rings of alternating color, usually light but saturated pinks, oranges, and reds and white space, which I’m sure has a term that I just don’t know, stands in stark contrast to the deep, dark blacks and purple-pinks of the LA night. I could stare at this page for hours taking in the stylized destruction and how it serves as the transition from the subtle to the blunt, from quiet moments of horror to the blood-soaked, triumphant, and vicious finale.

Unfortunately, while the execution of the finale is excellent, there are aspects of “Dracula, Motherf**ker” that don’t quite work. For one, Henderson’s coloring doesn’t always hit. Sometimes the stylization of the flat colors are like above, in concert with the rest of her art. Other times, the shading ends up drowning out faces and details, making them look mottled rather than contrasted, and so it ends up distracting rather than getting one to sink further into the stylization.

For another, it’s way too short, clocking in at 62-ish pages. This isn’t too unusual from an Image OGN, “Pulp” was 76 pages for example, but it doesn’t take away from the feeling that, despite the obvious talent on display, there’s something lacking.

Scenes never feel rushed, per say, but they feel emptier than they should, as if they’re afraid to linger on the silence and stillness. While there is enough to get the broad strokes and the tone of the place and people, both are underdeveloped, which feels deliberate as characters are more archetypes or representations rather than people, but when combined with the sharp but sparse dialog, it leaves a feeling that the comic is lacking something that would make it linger long after completion.

There’s a driving need to keep moving without explaining anything, a choice I like as it trusts the audience to piece the important bits together, but too little exposition AND a fast, compressed approach to storytelling is a dangerous combination, especially because it leads to a lack of contrast between the pace of the climax of the narrative and the pace at the start. Rather than feeling a sense of escalation, it’s all the same level. There isn’t enough friction to slow a reader down, which contributes to why the dialog ends up feeling slight, and even scenes that are all about establishing atmosphere and tone through the visuals — scenes that are done very effectively, I should add — lack this sense of calm before the storm.

Perhaps this is me wishing for something the book is not. The relentless, driving pace of the exploitation genre doesn’t leave room for the kind of quiet I’m hoping for. Moreover, were this to have been ladened with exposition or reams of dialog, the ominous, terse nature of the piece would be sacrificed and Henderson’s art would have been drowned out rather than placed front and center.

“Dracula, Motherf**ker” is a flawed piece but only insofar as it is taking grand sweeps and risks and missing in small ways. It is true to itself, true to its intentions, and is eminently re-readable. Rather than just a fun, schlocky “Dracula” modernization, “Dracula, Motherf**ker” has a voice all its own and that voice has a lot to say. This is almost certainly not the last we have seen from a Henderson & de Campi duo and I, for one, am damn glad they found each other.