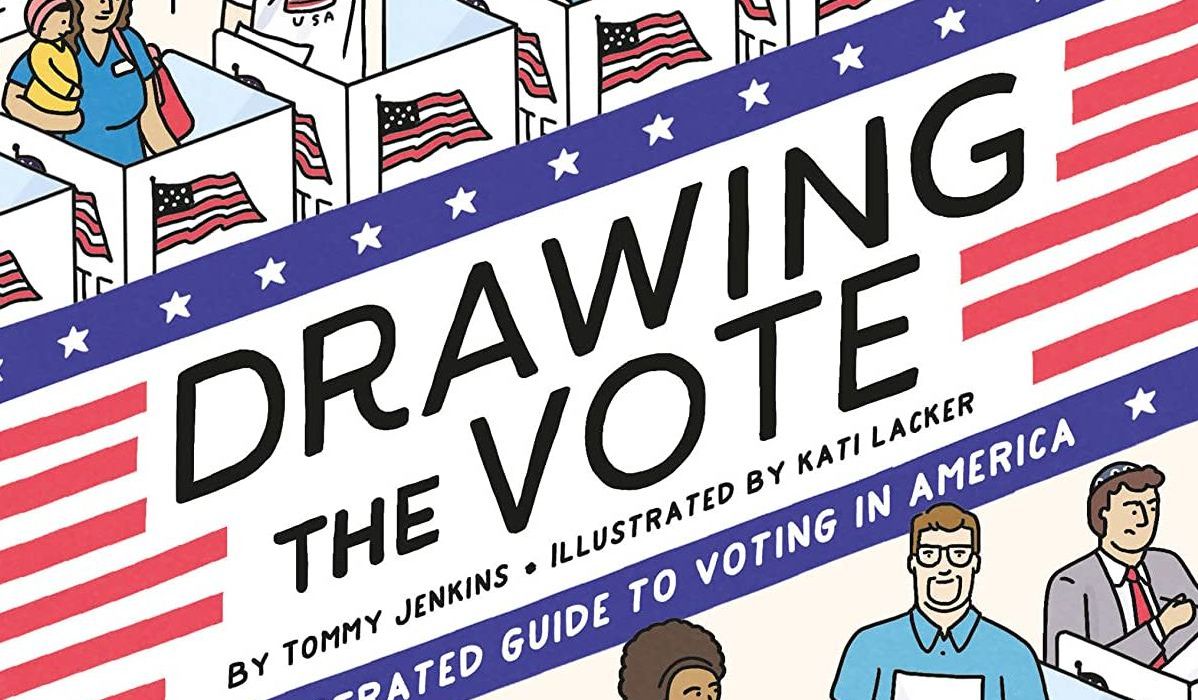 As Americans enter another contentious election year now darkened by COVID-19’s shadow, Tommy Jenkins’s illustrated history of the right vote shows the long, complicated, and flawed history to the participatory part of our political process. 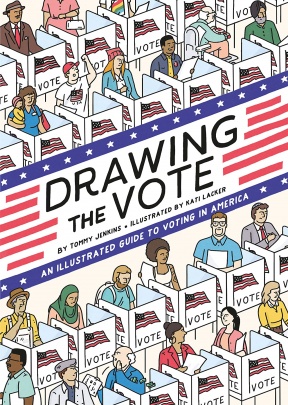 Cover by Kati Lacker
Written by Tommy Jenkins
Illustrated by Kati Lacker
Coinciding with the 2020 US presidential election, Drawing the Vote, an original graphic novel, looks at the history of voting rights in the United States and how it affects the way we vote today. Throughout the book, the author, Tommy Jenkins, identifies events and trends that led to the unprecedented results of the 2016 presidential election that left American political parties more estranged than ever. To balance these complex ideas and statistics, Kati Lacker’s original artistic style makes the book accessible for readers of all ages. At a time when many citizens are experiencing challenges and apathy about voting and skepticism concerning our bitterly divided government, Drawing the Vote seeks to offer some explanation for how we got here and how every American can take action to make their vote count.

A few years ago, I had the opportunity to attend a talk and Q&A with American broadcasting legend Dan Rather.  Realizing I have a chance to pick the mind of a man who has seen six decades of history unfold before him, I decided to see if I could stump him.

“Mr. Rather,” I said. “You have covered many elections throughout your career. Which one do you feel had the most effect on American politics?” And because I was feeling extra cheeky, I added, “And you cannot say 2000.” I didn’t want him to give what I thought was the obvious answer.

This television titan paused, looked at me, and said, “well, that’s not really a fair question, because every American election is transformative to politics.”

Now he did actually give me an answer (and if you’re curious, ask in the comments) but it was that first part of his answer that stuck with me.

Every American election is transformative to politics.

It is transformative because we have a say in the process.  We take the time out of our day – – maybe getting up a little extra early or making an extra stop on the way home from work – – to cast a vote for the people that are to represent us in our government.  But getting to that “we” wasn’t easy.  A government of the people, by the people, for the people is going to be a messy government, as people themselves are fallible and hopelessly flawed.  If you asked “how did we get here? How did we get to this place?” after the 2016 election, “Drawing the Vote” is here to give you the answer . . . that there really is no clear-cut answer. Quite a sobering thought.

This book treads in very familiar territory, or what should be if you paid attention during junior high or high school civics: the Boston Tea Party to women’s suffrage, the Voting Rights Act of 1965 to gerrymandering.  All of these, even those decisions made by white men in our history books that look nothing like William Daniels or Lin-Manuel Miranda, brought us to November 8, 2016, to the midterms in 2018, and to what will come later this year.  He (wisely) does not put blame or praise at any party’s feet, keeping things as balanced as possible. And he’s done his homework, as seven pages of backmatter (and two listing the state electoral commission websites) shows.  The topic certainly has potential to skew to one side of the ideological spectrum (and does dip its toe in the partisanship pool here and there), but Jenkins avoids this very well by sticking to the facts.

Within this timeline of voting in America is also a brief and scattershot exploration of the history of American political parties.  If you think of Republicans as the party that holds sway over the American South, you’d be surprised to know that it was actually the Democrats that ruled the roost of the Deep South for most of the 19th and 20th century, although in a different form than the Democratic Party of this generation.  Political parties (as well as campaigns and elections) are so much a part of voting that I do wish a little more time was spent on the changes in these mechanisms that help us to vote than what we got here. If I could have an entire college course in parties, campaigns, and elections, we could get a chapter or two on the history and evolution of the American political party. But there is enough information here on that topic, as well as our main topic, to spur readers who want to learn more to dig deeper.

Kati Lacker keeps her illustrations simple, emphasizing line and shape over texture, color, and pattern. There is a lot of information here, and going overboard with detail in art would crowd the page and take away from Jenkins’s facts and message. She dives into familiar as it is needed: Bernie Sanders looks like Bernie Sanders, Trump looks like Trump, but only just enough for the eye to recognize.  Again, all a focus on the facts and the history, not the visuals.  They are there to enhance and underline text, not try to outshine or outdo it. Those of us of a certain age who had a side of Schoolhouse Rock with our Saturday morning cereal will no doubt pick up on the cartoonish, nostalgic vibe, perhaps animating these segments in our own head.  And while I love when artists break boundaries with their paneling, this is one of those times that I’m glad the layout sticks to the tried and true.  This is a very linear story, where the eye needs to follow the page logically from left to right, top to bottom. The layout sticks to what other books would consider old-fashioned or formulaic, but that is because it serves its story’s tone and purpose very well.

No one knows what American voting in 2020 will look like in the shadow of COVID-19.  In my own home state of Connecticut, our presidential primary has been postponed twice, and every registered voter will be mailed an absentee ballot application so that we are able to vote without leaving our homes. Just over the border from me in New York, the presidential primary component of the June 23rd primary was cancelled and then restored by court ruling.  Wisconsin saw over 50 COVID-19 cases connected to their April 7th presidential primary. And while one party presses on with an in-person convention, the other leans towards virtual options.

If every election is a transformative one, as Mr. Rather said to me those years ago, this one puts that transformation right in the heart of the process itself. What that means for America and for liberal democracy? We’ll find out in six months.