Edmondson and Novosadov crank up the tempo and start spilling some secrets as the penultimate issue of this somnambulistic story starts sprinting for the finish line. 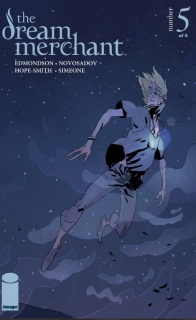 Everything that rises must converge. Winslow embraces his dream and is ready to defend the world from what is already here. The tale draws to a close and the scope of Winslow’s dream is larger than anyone could have imagined.

As a story that many readers found slow to start with a potentially alienating level of vagueness to the narrative, Edmondson and Novosadov have really found their feet as they enter the home stretch of their tale. Issue five sees the tensions of the previous issue, and really the whole series, come to a head in a potential conclusion that should satisfy those members of the audience who felt the lack of a coherent mythology early on was impeding the story.

As Anne and Winslow part ways we see an issue that is almost split down the middle in terms of focus, with Anne trying to contend with the skepticism and fear of the human police force and Winslow advancing into the dream world. This is a great direction for the story as it allows us, for the first time, an understanding of the scale of the threat that humanity is contending with. There is a lot of information to absorb in this issue and, at times, it can almost feel like Edmondson is aware that he’s still got a lot to cover before the final installment. But thanks in part to Winslow’s agreeable tone and Novosadov’s psychedelic dream world design, the story sails on the right side of expositional.

And, speaking of Novosadov’s art, this issue is a series high-point for me as far as visuals are concerned. As Winslow slips into the dream world we’re treated to the dizzying spires and alien structures of what could easily be believed to be humanity’s combined subconscious nightmare-scape. The canted angled panels, the fluidity of his journey and the purposefully confusing geography lends itself perfectly to the structure of an off-colour dream.

Anne’s apprehension by the human armed forces opens up the story to new characters with dialogue for the first time pretty much since the institution, and the inclusion of shadowy FBI agents helps further scale the depth and breadth of the danger that Edmondson and Novosadov are building up to here. Edmondson manages to play the angle of humanity’s final defense as simultaneously well-informed and ultimately useless; it’s a fine line but he steers clear of the heavy handed bumbling officials trope that is all too often used in scenarios like this, choosing instead to frame the investigators as a more shadowy human unit who simply haven’t got the resources to deal with this kind of situation. The scripting of these characters plays as cold as you’d generally expect from the men in suits, but there’s a hint of desperation that humanises their frosty demeanour.

Through the use of completely different colour washes Novosadov manages to easily separate these two parallel narrative threads. The dream world retains its usual pink hue while the real world takes on a sort of green, Matrix style glow, and the choice to use such easily identifiable differences means that, as the two worlds begin to collide, the visuals are almost as jarring as the narrative itself. Novosadov’s dream world creations are as arresting as they are alien and it’s really his confident visual storytelling that keeps the action flowing while Edmondson does some narrative knitting in anticipation of the final issue.

My only criticism would be that Winslow’s character seems relatively under-developed still at this point. He suffers perhaps from the length of time he’s been allotted, but it seems as though he’s stumbled rather awkwardly through some of the earlier narrative points in more tick-list fashion than because he’s worked for them. This qualm isn’t really fully addressed in this issue, but it’s possible that the reasoning behind Winslow’s lack of distinctive characterisation is entirely a time thing. Six issues doesn’t exactly leave room for masses of character development, but I would like to have seen more from our reluctant protagonist. That being said, Edmondson has created a likeably earnest hero in Winslow and, as he begins to rise to the challenges ahead of him in this issue, he seems for the first time like a dreamer in control of his own subconscious.

Like any good nightmare, “The Dream Merchant” started off slow, sinister, and nebulous, but as it nears its conclusion it’s setting itself up for a thoroughly disturbing crescendo. While the initial pacing may be offputting for fans of more straightforward thrillers, issue 5 seals the deal for me as an interesting concept executed well, and that’s really what I feel as mini-series should offer.

Final Verdict: 7.2 – The best issue yet from Edmondson and Novosadov, a strong set-up for a final issue that looks set to leave you sleepless