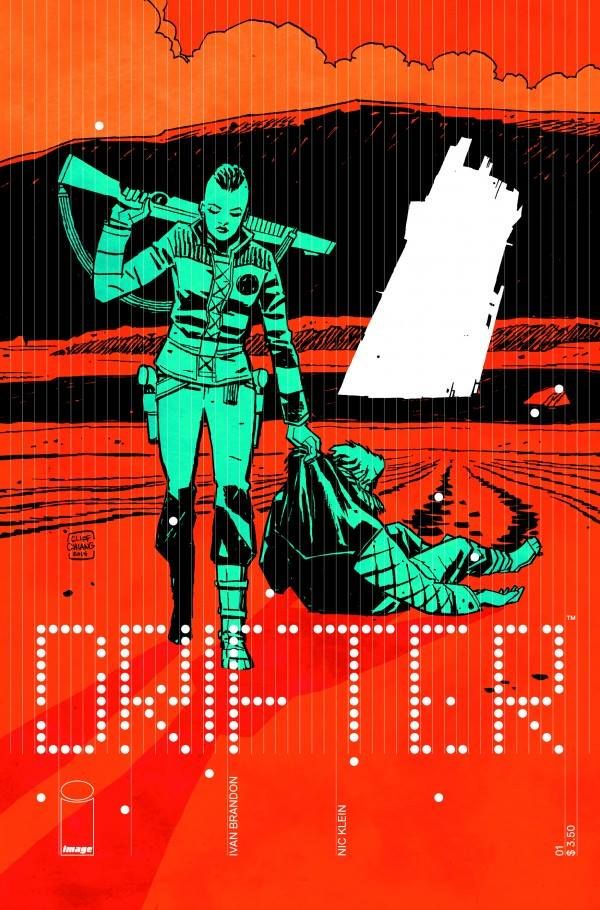 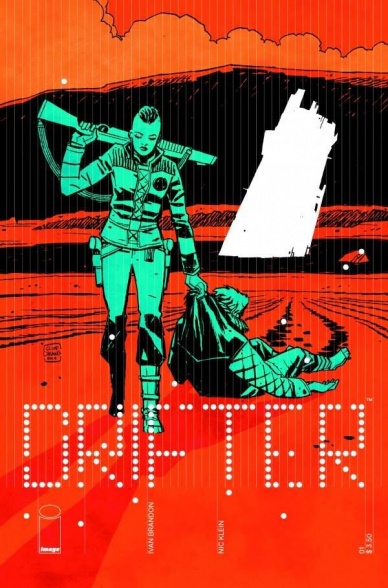 Science fiction as a genre is one that has grown increasingly well tread, as the influence of notable achievements like Star Wars, Alien and more bred a generation of storytellers with great interest in telling their own story of the sort. It’s been a popular genre in comics as well, and the most recent Image Expo saw a massive influx of stories that fit that title coming to the comics giant. Books like Jeff Lemire and Dustin Nguyen’s “Descender”, Gabriel Hardman and Corinna Bechko’s “Invisible Republic” and Warren Ellis and Declan Shalvey’s “Injection” can ostensibly be classified as such, and all look like thrilling achievements in their own right.

But the science fiction title from that wave of titles that intrigued me the most was Ivan Brandon and Nic Klein’s “Drifter”. It was a tale told about a man named Abram Pollux who crash landed on a planet named Ouro, and it delves into what he does in coping with this new, lawless world and as he attempts to sort out what happened to him. It was said to be in the vein of both Western classic Unforgiven and the sprawling insanity of Dune, but for me, the prospect of something that fit into dirty sci-fi was enticing. By that, I mean not something quite as clean as the space as depicted by Star Trek, and having more in common with something like Firefly or John Carpenter’s Dark Star. I love that type of more lived in science fiction, as it just feels more real to me.

Oddly enough though, when I got the chance to read the first issue of “Drifter”, it reminded me of another dirty science fiction film, “Pitch Black”. As someone who is a big fan of that movie, know that I mean that as a complete compliment, but the way “Drifter” opens naturally pairs with the crash landing open of that film, and Brandon’s internal dialogue for Abram reminds me of the more stylized machismo that film delivered.

For the most part, though, that’s where the comparison ends, as “Drifter” is undoubtedly a very original feeling story. I’m not going to get into any details, but I will say this: from a sheer plotting standpoint, by the end of the issue this comic will have subverted your expectations for it significantly. The last page genuinely surprised me, and left me eagerly anticipating where they can go next.

Brandon’s work on this book is very strong, and maybe the finest thing I’ve read from him yet. While the aforementioned internal dialogue can be a little intense, it fits well with the influences cited before, and it gives series lead Abram a real intense yet likable feel. These characters, from Marshall/Medic Lee Carter to resident holy man Arkady, all feel fully realized, and Brandon gives them a real sense of depth without relying too heavily on cliches of their archetypes.

Ouro and the Ghost Town this issue takes place in are hugely important elements as well, and Brandon and Klein combine to deliver a world that feels oppressive and hardened without driving the reader away. The world, in its dirt and hopelessness, has pockets of magic that intrigue, and I’m very curious to see how they explore it as they go along. 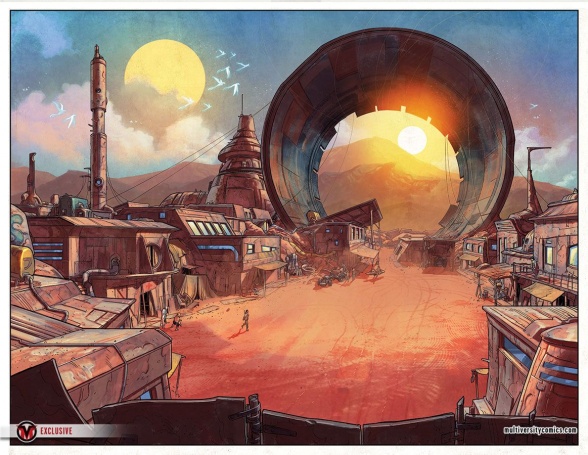 A Two Page Spread from Drifter #1

It’s also surprisingly funny, in a black humor sort of way. There’s one bit in the issue that finds Arkady meeting Abram, and Carter’s reaction to Arkady’s God giving Abram the strength to rise. It’s sold visually tremendously well, and it’s a great example of how well Brandon and Klein work together.

All of this is prelude, though, to the real selling point: the visuals. Nic Klein’s an artist we’ve long admired, but damn if this isn’t the best stuff of his career. It’s not only that, but this is some of the absolute best art in comics right now even. Klein’s handling every aspect of the art himself – from the very formation of the pages down to the colors – and he knocks it out of the park entirely. His character designs, character acting and landscapes are absolutely phenomenal, and it grounds the story in a firm reality that makes it all the better.

The highlight, though, are his colors. There are some vistas – like a long, wide shot of someone Abram is looking for disappearing into the sunset, or a mammoth rock formation hiding the finishing sun – that are beautiful from a linework standpoint, but the colors help deliver a moody realism that accentuates the scenes to an entirely different level. There’s a dangerous beauty in these colors, and amidst a comic filled with notable elements, Klein’s colors resonate all the more.

Design god Tom Muller is involved with this project, and it’s worth noting that his fingerprints are seen here in all the best ways. I love how his opening page of the book isn’t just traditional credits pages, but a storytelling element in their own right. The former looks like a HUD or a rather foreboding panel from a ship, and it sets the stage perfectly for what follows. He incorporates the graphic elements we’ve seen on the covers of the book already on each page he touches, but that first page is the standout for his work here.

All in all, “Drifter” is an excellent debut, and the type of science fiction that I can’t help but love. The storytelling exudes a real sense of confidence, and within (or because of) that, the characters intrigue and the visuals astonish. Like with many Image titles, it very well might not be for you, but if you’re a fan of more grounded (literally) science fiction and just absolutely phenomenal art, “Drifter” likely is a book for you.

Final Verdict: 8.0 – another great Image debut from a pair of highly talented creators