The novel role that Ryan Gosling made his own takes the leap from the big screen back to the page. 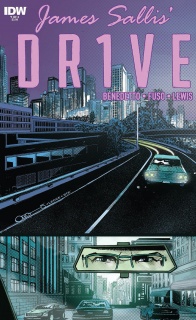 A hard-boiled pop-culture sensation re-created for comics.
In L.A., there’s one man you want behind the wheel. Just tell him where and when. He doesn’t take part, doesn’t know anyone, doesn’t carry a weapon. He drives, and he’s the best

From the pages of the 2005 novel to the big screen adaptation six years later, James Sallis’ hyper-stylised Noir/Western has been part of the cultural landscape for longer than most people realise. Now – whether accidentally or purposefully – marking the ten year anniversary of the original book, the nameless ‘Driver’ is getting a new lease of life via the pages of an IDW four part mini-series attempting to tell the story anew in yet another medium.

I, like a lot of people, initially discovered Sallis’ story through the immediate cult classic that was the 2011 film. The visual tone, eerily calm pacing, and perfectly understated acting drew me in and kept me wrapped for the entirety of the movie’s conservative runtime.  I watched that film a lot when I found it although, I’m slightly embarrassed to admit, I still haven’t read the book on which it was based.  However, when I heard that it was making the transition to comics I was immensely stoked. That being said, I’ve come out the other side of “Drive” #1 with a lot of conflicting feelings towards it, some great, some not so great. There’s a whole load of stuff this first issue gets right, but I’m still pretty confused about how I feel about it overall.

Something that stands out straight away, before you’ve even opened the book, is the faithfulness with which Benedetto and Fuso have recreated the vibe that Sallis (and Drive director Nicolas Refn) so perfectly isolated in their versions of L.A. There is a grim, neon-soaked feeling of perma-night that pulses through the pages of “Drive” #1, and Fuso is definitely the right guy to bring that vibe to life. His severe, angular line-work, coupled with colourist Lewis’ harsh palette of almost exclusively turquoises, purples, and oranges, immediately projects a picture of L.A. that requires no further introduction. Fuso’s meticulous reconstruction is so sparse and yet detailed, showing only the seedy specifics that help build the world of the driver up in front of our eyes, that it frees Benedetto up to wax stoically about everything except the story.

And Benedetto does a fantastic job with the tone of ‘The Driver’. Dry, terse, experienced, but not your traditional world-weary professional. Benedetto’s Driver is a modern-day Ronin, a getaway driver with such a strict code of conduct that, were it not for the uniqueness of his skill set, none of the seasoned criminals (or seasoned filmmakers) he works with would hire him. Benedetto balances this rigidity with a level of self-awareness that makes for some pretty pithy interactions  in the first issue, and I’d argue that his scripting strips away some of the likeability of The Driver that Ryan Gosling brings to the role, making for a much more ambiguous (and potentially more interesting) protagonist.

All that being said, it never really feels like this book is building on the legacy left by not one but two previous iterations of the same story. Fuso and Lewis’ strict adherence to the tone of the film make it difficult not to compare and contrast panels to shots as you read through and, although Fuso manages to capture movement both in and out of cars well (through use of both translucent echoes and insert panels) it was always going to be a struggle to beat ‘moving pictures’ for fluidity. Benedetto has shaken up the running order of the issue slightly in comparison to the more linear source material but, even though he opens with a pretty dramatic and hugely emotive high-stakes cliffhanger before flashing the story back to an earlier point, I worry that the level of faithfulness with which he adapts the story will switch some of the readers from would-be detectives to nit-pickers, pointing out the differences between the two different properties in much the same way that Harry Potter fanatics did during the initial run of the films.

Benedetto and Fuso’s opening quarter of their version of “Drive” is definitely a slick, evocative, and well-muscled beast of a first issue. It’s worth a read both for fans of the book, the film, or just of Mystery comics in general. My only worry is that an over-reliance on the story that readers may already know, and a stylistic attempt to pull influence from two mediums so inherently different (the book has to deliver everything without pictures, and the film can do it all with movement) may end up tying the creative team up in too many strings. That being said, I’m definitely going to keep up with this series because everything it’s done so far it’s done pretty perfectly, and it’s difficult to hate on a comic too much for being true to such solid source material.

Final Verdict: 6.9 – A strong, stylish start, that offers something racy and recognisable for fans and newcomers alike. I only hope it distinguishes itself further from its namesakes as it goes along.