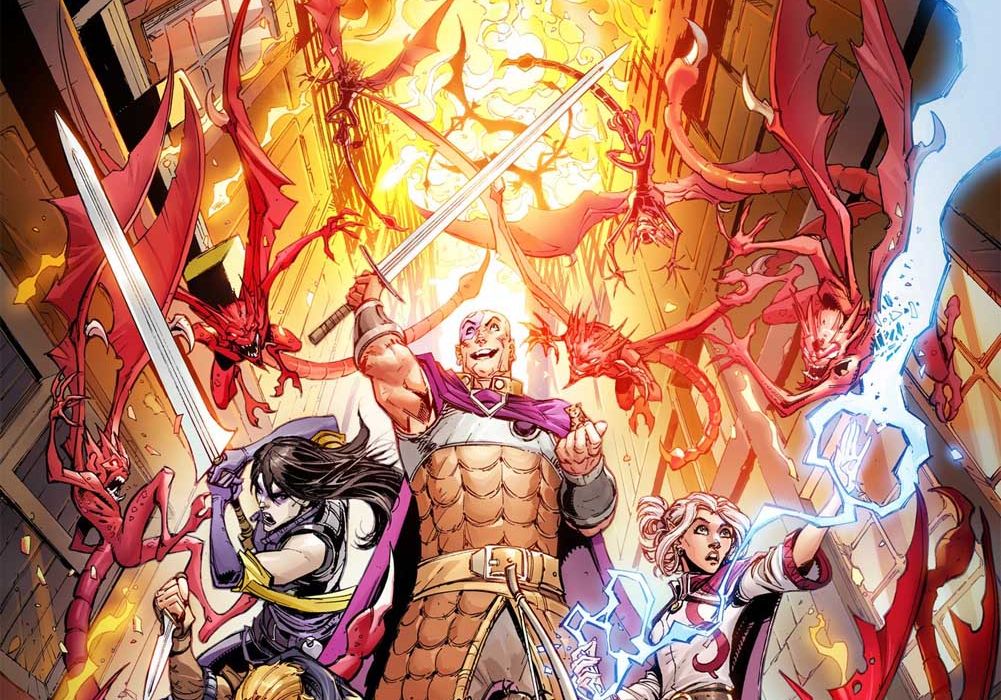 Minsc, Boo, Delina, and the rest of the heroes of Baldur’s Gate are back as Jim Zub and Max Dunbar continue the “Dungeons & Dragons” comic storyline. True to tradition, these comics tie in to the latest adventure book to come out from D&D: “Descent Into Avernus.” So how does the latest adventure begin? Let’s take a look and see. 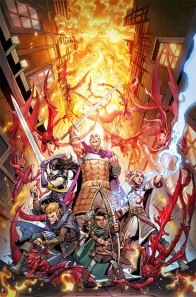 Minsc and his friends are caught in the middle of devil-tainted corruption that has taken hold of Baldur’s Gate. Unravelling the secret of its source will take our heroes to unexpected places and threaten the sanctity of their very souls. Even if they survive this perilous journey, there will be Hell to pay!

For those unfamiliar with “Dungeons & Dragons” lore, Avernus is the first layer of Hell. Fortunately, readers do not have to know this bit of information in advance, as the comic begins with a look at the raging hellscape. Right off the bat, artist Max Dunbar puts his skills to use with a truly fiendish scene, complete with the hordes of the abyss and roving gangs of monsters. The artwork is immediately eye-catching, complete with fantastic character designs like a pale, one-eyed Mind Flayer on an infernal war machine that wouldn’t feel out of place in Mad Max.

The action continues back in Baldur’s Gate. Writer Jim Zub doesn’t give us a moment to breathe (or the art team a chance to rest) as we’re taken on a chase and battle through the city. Even in the action, the characters’ personalities and humor comes through nicely. Minsc, the leader of the team, gets very amusing banter in the middle of combat; describing his sword as a “hamster-blessed blade” is a personal favorite.

Once more, credit must be given to artist Max Dunbar and colorist Sebastian Cheng for everything the artwork brings to these scenes. The action is fast-paced, but every scene and moment has an impact behind it. The design for the devil that Minsc fights is ominous and sufficiently threatening, clad in dark armor that reflects the light of fires burning from its sword and steed. Later battles get the same amount of attention, mixing magic and monsters in fast-paced clashes.

The story balances the three core pillars of a D&D adventure: combat, exploration and story (“roleplaying” in terms of an actual game, but we’re talking about the comic here). The combat leads to the introduction of a new character (Aubree, paladin-in-training of Torm) and key plot elements. This in turn leads to an exploration through Baldur’s Gate, where the party rogues get to shine, before leading to more exposition and more combat. It all flows very smoothly, keeping the story engaging at every corner and advancing at a great pace.

Jim Zub also makes good use of the entire party. While Minsc and Delina get to enjoy the first fight scene, rogues Shandie and Krydle get a wonderful montage of following leads and tracking down an important character. Nerys, the party cleric, plays a slightly smaller role but still gets to contribute in her own way.

“Infernal Tides” utilizes “Dungeons & Dragons” lore quite nicely, as the storyline is connected to the Blood War. The conflict of devils and demons is a large part of D&D history (as referenced in the recent “Rick and Morty vs Dungeons & Dragons,” also written by Jim Zub) and is a driving force of the plot.

The narration describing the Blood War receives an illustration nearly taking up the entire page, but it is a sight to behold. Not only does the illustration show the clash between armies of demons and devils as a truly staggering battle of immense fiends, but the way they’re presented – with reckless hordes of demons clashing against organized forces of devils – stands as a great visual representation of the chaotic evil nature of demons and the lawful evil devils. D&D players might also recognize the beast-like designs of the demons signify that they belong to Yeenoghu, the Demon Lord of the Gnolls – another nice detail that shows off the thought that went into every page.

“Dungeons & Dragons” players who are playing the current “Descent Into Avernus” book may recognize important plot elements that run parallel between that story and the comic (aside from the overall story of the Blood War and adventurers fighting devils from Avernus). An important MacGuffin in “Infernal Tides” is the Puzzle Box belonging to the High Overseer of Elturel. The same item is used to advance the plot in the adventure book. We can see similar parallels in minor elements like the use of Tressym (winged cats). These are all nice touches that make the comic feel like an extension of the adventure.

(Speaking of nice little details, readers might spot a character looking distinctly like Joe Manganiello enjoying a drink in Baldur’s Gate, with the symbol of Tiamat tattooed on his hand. This is entirely intentional, as Joe is a longtime D&D fan. His character Arkhan the Cruel, a paladin of Tiamat, plays a role in the “Descent Into Avernus” adventure.)

While it would be easy to keep going on about everything in the comic that successfully turns the lore and mechanics of “Dungeons & Dragons” into a comic, none of that should be a surprise at this point. Jim Zub has a portfolio filled with excellent fantasy comics, from “Pathfinder” to all of the “Dungeons & Dragons” comics starring Minsc and company, even the “Champions” story arc where the characters were thrown into a fantasy-styled world. His expertise comes through in the great action, dialogue, story progression and character work.

The same could be said for Max Dunbar and Sebastian Cheng. Max has been illustrating the “Dungeons & Dragons” comics as long as Jim has been writing them, in addition to the aforementioned “Champions” arc, the “Rat Queens: Orc Dave Special” and much more. Colorist Sebastian Cheng has an equally impressive portfolio, which helps the color work in the issue pop quite wonderfully. Every character has their own color scheme that suits their personalities, and whether a scene is all shades of red or filled with a multitude of colored rugs, nothing clashes or feels out of place.

The “Dungeons & Dragons” comics have been great stories on their own or as tie-ins to the latest D&D adventure books, and “Infernal Tides” is no exception. Between the story, characters, and artwork, it’s a must-read whether you’re a casual fan or a keeper of the lore.

Final Verdict: 8.6 – A fiend-fighting fun time in Baldur’s Gate, bringing the beloved band of brave heroes back to battle the forces of badness. Everyone working on this comic must have rolled a Natural 20, because it’s a critical hit.