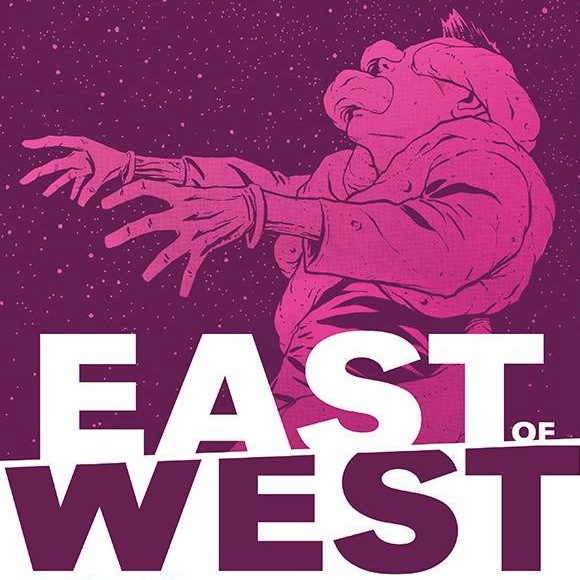 The whole world is going to hell. As the clock ticks down to the end of it all, the Chosen meet for one last time, and fracture. 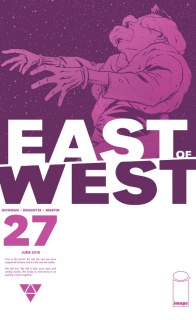 Death gets closer to finally reuniting with his son.

Just want to note before I begin: That solicit text has absolutely nothing to do with this issue. Like, at all. Death and Babylon aren’t even in this issue.

“East of West” is always a weird book to discuss. It is one of the most impenetrable books on the stand. Seriously, even if you think you can “jump on” at an issue that would start a collection, that’s a terrible idea. I say all this because, unless you are following this book, what I am about to talk about is going to seem like complete and utter highly dramatic nonsense.

For a while now, the majority of the big moves have been focused on the Chosen, the almost-cult of highly influential and powerful that have, to this point, adhered to the Message that heralds the coming Apocalypse. Over the course of 20+ issues, we have seen into the minds of these characters -from the devious to the zealous- and now that all comes crashing down as the Prophet Ezra Orion takes his zealotry to whole new levels.

”Are you an Agent of the End Times? Have you become what the Message demands?” That has been a set of questions that has followed Ezra around throughout the story. The poisonous combination of religious fervor and his desire to please a parental figure fuels his every move, including up to and devouring the written Word and becoming the living embodiment of the Message. It did and continues to strike me in a weird vein. Perhaps it’s a commentary on a “It’s the Law because I say it’s the law” kind of mentality. At least, that is how I’ve always read it.

The whole variety of the Chosen scatter, their motivations all a chaotic, from Doma Lux’s conflicting loyalties to John Freeman’s own sense of honor. But, as is always the case, the one that manages to steal the scenes is the old bastard of the Confederacy, Archibald Chamberlain. It would only be natural that his sharp and slippery words here would begin the unraveling. It is just so devious (and a bit unnerving) how easily he can get under the skin of people and manage to keep his endgame a mystery while simultaneously being the most open about his loyalties/motivations. He’s almost like a bolder version of Littlefinger from Game of Thrones, albeit the accent I have in my head doesn’t fluctuate anywhere near as much as Aiden Gillen’s does. He also shows a deep flare for the dramatic here, to an admittedly dark comedic effect.

Dragotta and colorist Frank Martin had a much more action-intensive issue this month. Watching their art evolve over the course of this series I have come to notice something: Dragotta’s people are drawn a lot more sharper now. I mean that literally; his characters have become a lot more angular as the book has gone on. To use an example: Chamberlain. The old man has always had a bit of a long face, even in the beginning. Now his face is really long in some panels. Now, I don’t necessarily consider this change a detriment. It has had a bit of an impact on how the team frames action (Frank Martin’s use of red and negative space to emphasize some real brutality is always a treat). The flow becomes a lot more graceful at times, even when the divulging into smaller panels can rock the pacing occasionally.

This book could make the argument in the Futility of Jumping-On Points (which may be an article in the future). Density is the key here. A lot happens in this issue, even for one that is oversized. It doesn’t seem like I described a lot but consider there are fifteen named characters in this (not including the legions of Ezra’s pilgrim followers) and they all manage to get a moment in it, whether it’s shooting their mouth off (Chamberlin), actual shooting of people (the Ranger) or continuing creepy possession (Cheyveo). It can be overwhelming, even for someone that has followed to this point.

This is it. The big fracturing of the Chosen. And the World’s going to follow with it.

Final Verdict: 7.8- An action-heavy issue after a load of build up, to good effect.