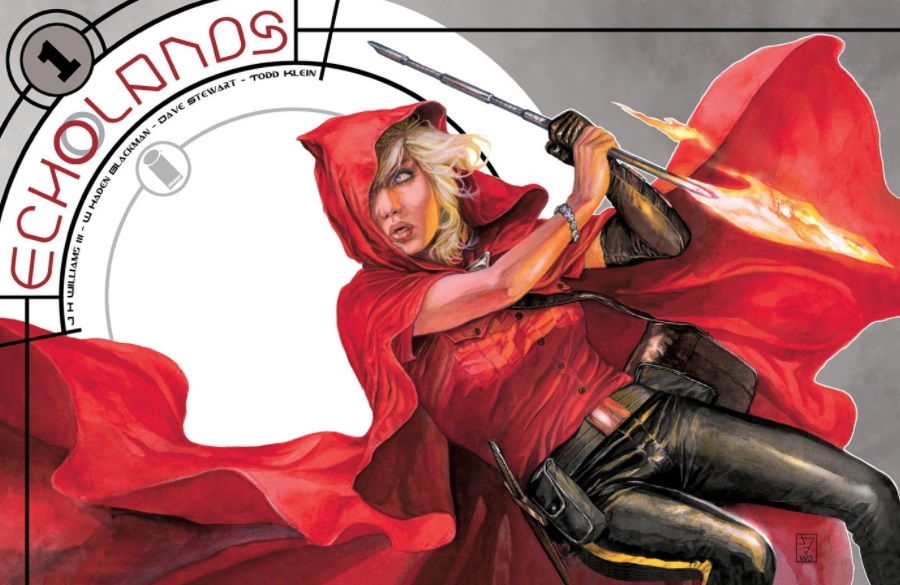 “Echolands” #1 is almost impossibly vast. There’s a lot to cover here, but the short of it is that this is a chaotic, fast-paced, genre bending, big scale brawl of a story. It’s not just fantasy, sci-fi, cyberpunk, steampunk or anything of the sort — it’s all of those things at 110 percent. If you love it when your comics have Where’s Waldo levels of detail, then “Echolands” #1 is for you. If you think of yourself as an aesthetics Joker, then this comic is for you. And if you’re willing to let story runners take the reins as they go to hell and back again, yes, you guessed it, this story is for you. Let’s try our best to unpack this behemoth of a story. 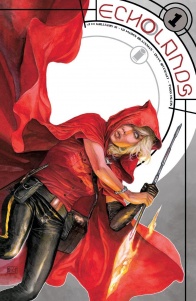 In a bizarre future world that has forgotten its history, a reckless thief, Hope Redhood, holds the key to excavating its dark, strange past—if only she and her crew can escape a tyrannical wizard and his unstoppable daughter. But fate will send them all on a path leading to a war between worlds.

ECHOLANDS is a landscape format, mythic-fiction epic where anything is possible—a fast-paced genre mashup adventure that combines everything from horror movie vampires to classic mobsters and cyborg elves, to Roman demigods and retro rocket ships. It’s going to be a helluva ride!

We have to start with the art. Williams (Promethia, The Sandman: Overture, Batman) is on top form, painting Sistine Chapel level panels and splashes. And in case you missed the major conceit of “Echolands” #1, it’s that the entire thing is in landscape mode. This means fresco-esque pages filled to the brim with details, amazing wide-screen shots where you can physically feel your eyes moving from left to right, taking things in. Williams and Blackman make great use of the format, and oftentimes there are multiple narratives happening at once: the background panel, often a single wide pane or a triptych, which serves as the context for the scene, and then smaller panels superimposed on top of that that include main characters and action. We’re not gonna lie, this format takes a little bit of getting used to, and at times “Echolands” #1 feels overwhelming. However, it’s never overwhelming in a way that made us want to put it down, more-so it was just…awe inspiring. Regardless, if minimalist comics are your thing, there’s a high chance you’ll find “Echolands” #1 overstimulating. Still, we recommend picking it up just for the novelty of it.

Let’s take a minute to talk about the world in “Echolands” #1. In some ways it’s a classic dystopian setting, through environmental hints we see that this story takes place in futuristic San Francisco. But like we said before, the world really defies genre. It’s not neo-noir, it’s not crusty like Star Wars, and it’s neither high fantasy nor grimdark fantasy or any other niche. Instead, visual tropes from across the board comingle as if nothing is awry. We see robots, anthropomorphic denizens, medieval warriors, cowboys, elves, and anything else you can think of. What’s more, Williams boldly includes characters of wildly different designs intermingled with one another. For example, in one crowd of future San Franciscans you’ll see a person drawn in cartoon style, a hyperrealist individual, someone rendered in black and white — you get the idea. It never feels messy, and to be honest, all the action sequences are legible. Again, that’s in part due to the landscape nature of “Echlands” #1. Things are narrower and longer, meaning our eyes are effectively funneled across the page in a direct line. This helps a lot, as there’s so much going on in the story that a constant visual direction helps a lot.

Stewart’s colors are also on point, and we’d love to see what kind of notes the creative team was passing back and forth for this. Just as is the case with the visual direction of the story, the colors in “Echolands” #1 vary from hyper-textured, realistic costumes and expressions to more matte and cartoonish color applications. Sometimes with stories, we’re able to establish the emotional or spiritual ethos of the comic by talking about it’s color schemes. Good luck doing that with “Echolands” #1, which is all about chaos. We have vivid reds, dark blacks, deep, enchanting blues, radioactive yellows…really, there is some of everything. And we’re not mad about it.

Todd Klein is the icing on the cake. Letters often add that extra bit of spice to a story and its characters, and they do that in “Echolands” #1 in imaginative ways. Sound effects fade in and out of panels, and we get a good mix of futuristic, digitized fonts as well as more classic, drippy and ominously colored villain dialogue bubbles. As is the theme in “Echolands” #1, excess is key.

Plot-wise, the story is relatively straightforward, and quite fast paced. We’re dropped In Media Res, with Red, our protagonist, about to deal a killing blow to a bitter enemy and rival. Then we get a flashback to the narrative that then drives the majority of “Echolands” #1. In that portion of the story, Red and her band of thieves and miscreants dash through the city after stealing a pricey gem of unknown power from the brutal overlord of San Franciso. The usual chase hijinks ensue, and we’re left with a tavern standoff between Red, her friends, and an agent of Teros with a platoon of conquistador looking, rifle and bayonet wielding ruffians. It gets violent. Honestly, the plot being so simple at this point is a blessing, as there’s so much going on visually.

In that sense, “Echolands” #1 manages to do something truly great. It manages to be incredibly vast, but tightly paced, and easy to follow. We could really see ourselves getting lost in this world.

Final Verdict: 8.8. Overflowing in the best way possible — this comic is an explosion of excess and unyielding, chaotic fun.